There’s a lot of stuff to like about motorsport, obviously. One of the best things, which we don’t see particularly often in series such as F1 or the WEC, is a good photo finish.

A close run to the chequered flag is clearly one of the most exciting ways for a race to be decided and oval racing lends itself to this perfectly. Let’s take a look at some brilliantly close battles to the line in oval racing.

Nascar is one of the best motorsport series when it comes to photo finishes. This one from Phoenix in 2016 included some wheel rubbing and bodywork contact for good measure, too, with Kevin Harvick beating Carl Edwards by one of the slimmest margins in Nascar history. Epic.

Ganassi’s Scott Dixon was originally classified the winner of the 2008 IndyCar race at Chicagoland but that was overturned when slow-motion footage showed Penske’s Helio Castroneves was in fact ever so slightly ahead. Nevertheless, Dixon won the IndyCar title in the most dramatic style possible.

It wouldn’t be a list of awesome photo finishes without the closest gap between first and second in the history of the Daytona 500, set in 2016 when Denny Hamlin narrowly edged Martin Truex Jr. to victory at the famous Nascar Cup race. The actual difference between the two cars? Just 0.010 seconds.

Any excuse to use this video in an article. The four-wide, photo finish to the Freedom 100 Indy Lights race at the Indianapolis Motor Speedway remains one of the best moments in US racing. It was the perfect warm-up to the Indy 500. Peter Dempsey won it by 0.0026 seconds from Gabby Chaves, Sage Karam, and Carlos Munoz.

As we have already established, the Freedom 100 is renowned for its close finshes. While not quite as spectacular as 2013, 2016 was still one to remember – Dean Stoneman beat Ed Jones by just 0.0024 seconds.

The Nascar Truck series race at Charlotte in 2015 featured this incredible wheel-banging run to the line between winner Kasey Kahne and Erik Jones, it really couldn’t get much closer between them at the chequered flag.

What is it with Chicagoland and close IndyCar finishes? Sam Hornish Jr. beat Dixon and Bryan Herta in a three-wide finish, which remains one of the closest ever in the series. No wonder the commentators were going so crazy…

Another awesome IndyCar finish, this time at Kentucky in 2009. Ryan Briscoe beat Ed Carpenter to the win this time round, the gap being just 0.0162 seconds at the chequered flag. Wow. Whoever says oval racing is boring is absolutely crazy.

One of the great things about oval racing is the unpredictability – if someone’s close to the leader with a lap or two to go, they could still take victory. This example from Nascar’s visit to Darlington in 2003 represents this brilliantly – Ricky Craven rubbing wheels with Kurt Busch to win. 0.002 seconds was between them!

The drivers in Indy Lights clearly get good practice in for photo finishes. This one from 2007 at Chicagoland was incredibly close, it looked like Logan Gomez and Alex Lloyd were level – but the difference was in fact 0.0005 seconds in Gomez’s favour, in the end. Just mad.

What other oval racing photo finishes do you remember well? Let us know in the comments!

(This article was orginally posted in May 2017, but following this ridiculous finish from Daytona, we thought it was worth sharing again!) 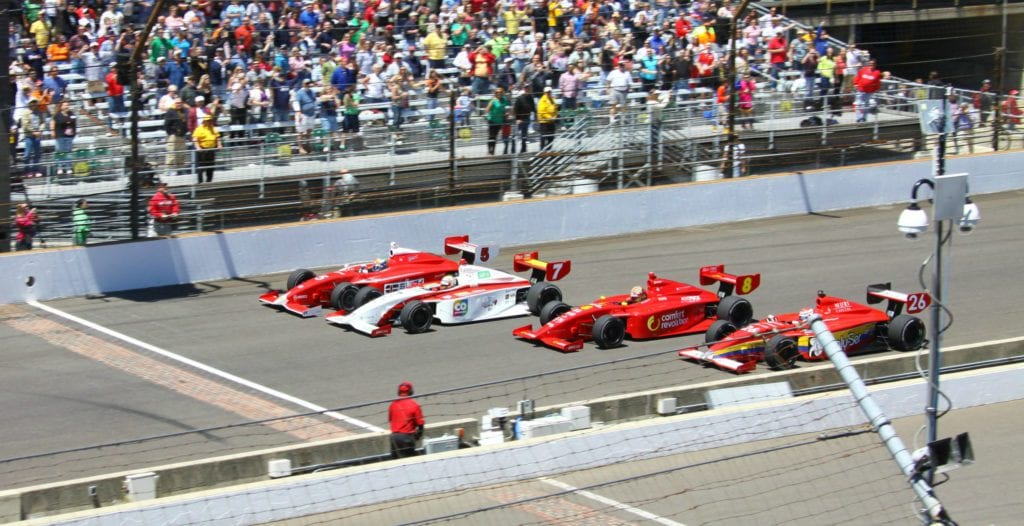