GP2 was supposed to use a new car every three years, but for financial reasons, the Dallara GP2/11 has been in use for a massive seven seasons. It’s a good thing too because it’s been an amazing car which has frequently given us some incredible battles over the years.

Next year, however, Formula 2 is getting a new car, with a turbocharged engine, different aero and… the Halo. It’s got a lot to live up to; here are 10 awesome battles that show why.

One of the all-time great GP2 moments, eventual champion Romain Grosjean was fighting through from last after being disqualified from the feature race.

Overtaking at the Circuit de Catalunya is tough enough at the best of times, but having already made his way up to 14th, he gained three places in two corners with a sensational bit of driving, eventually going on to finish ninth.

In wet conditions, Christian Vietoris and the late Jules Bianchi put on a mesmerising show in damp conditions as they battled for the lead of the race. Some incredible overtakes and very respectful driving later, Bianchi went on to win.

Who says you can’t overtake at Yas Marina? The circuit hosted a non-championship round at the end of 2011 and the last couple of laps descended into the kind of craziness that the series is prone to from time to time.

The closing laps of the sprint race at Valencia (does anyone else kinda miss that circuit?) were properly thrilling as James Calado tried everything to hold off a bunch of quicker drivers, including the legends that are Max Chilton and Rio Haryanto, with the lead changing with just a few corners to go.

Whilst Marcus Ericsson secured a dominant victory (no, really) ahead of James Calado, an almighty scrap for third broke out in the final few corners between four cars.

Stefano Coletti just managed to grab third in the melee, ahead of Fabio Leimer, Stephane Richelmi, and Robin Frijns.

The GP2/11 has often made for some great racing at the Hungaroring, and the feature race there in 2014 gave us some classic action. Though it wasn’t even for the lead, title rivals Jolyon Palmer and Felipe Nasr fought like mad for much of the race, going wheel to wheel on multiple occasions.

Thanks to reverse grids, tricky tyres, and a closely matched field, it’s not all that common for drivers to win both races in a weekend. But at Baku in 2016 Antonio Giovinazzi did just that, passing teammate Pierre Gasly on the very last lap of what had been a manic sprint race. Even more impressive is the fact that Giovinazzi had made a terrible start and was actually last at one point!

Another day, another battle for the lead in the closing laps of a GP2 race. Giovinazzi was something of a master at this, having won in Baku and Monza on the very last lap, so with as many as three laps to make a pass stick on Sergey Sirotkin, it was always going to happen, right? Awesome stuff.

Choosing to pit in a race where you don’t have to? Now, why would you do that?! The thing is, the degradation of the Pirelli tyres at the Bahrain round at the start of 2017 was so high that the Prema team and Charles Leclerc decided to roll the dice and stop for new tyres. That left him eight laps to overcome a 20-second deficit and go from 14th to first – which of course, he did!

Leclerc gave the Dallara GP2/11 a decent send-off in the final race of this year’s Formula 2 season, starting from seventh and going on to take the win on the last lap with a ballsy overtake. 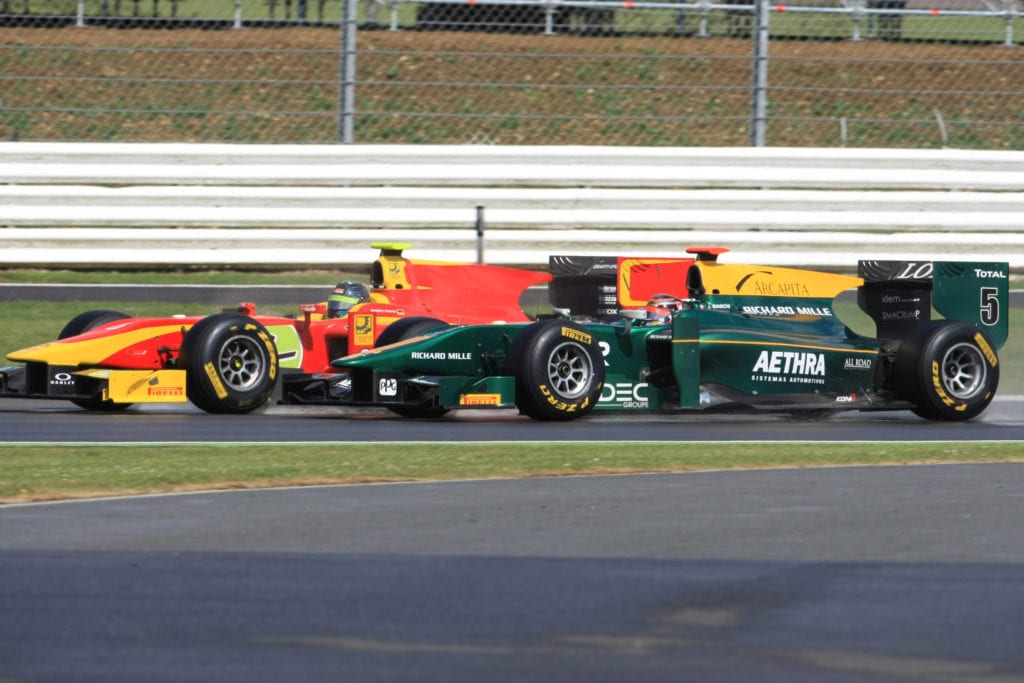