Much like great F1 drivers who never won at Monaco, or a top cricketer who never made the honours’ board at Lord’s, there have been some great sportscars which never captured endurance racing’s biggest prize – a victory at Le Mans. That doesn’t make them any less iconic though – in fact, in many cases it probably only makes them more memorable. Here are just 10 such cars.

The most successful Ferrari sportscar of all time managed to win everything except for Le Mans. Rule changes for 1972 favoured prototypes with 3-litre Formula 1-based engines, and Ferrari completely stole a march on everyone with the 312 PB. Of the 11 races in that years championship Ferrari won 10 of them. The only race it didn’t win was Le Mans and that’s because it didn’t enter – Enzo Ferrari was worried about the reliability of his engines and if he didn’t think he could win, why would he enter?

In 1973 the cars weren’t quite as dominant but in order to keep up with Matra in the World Sportscar Championship Ferrari sent its 312 PBs to Le Mans. It looked as if Ferrari might win too, as Jacky Ickx and Brian Redman were leading but retired with just a couple of hours to go, handing the race to Matra. Another 312 PB driven by Carlos Pace and Arturo Merzario finished second, six laps down on the winner.

If you’re in any doubt as to how good the 312 PB was however, then how about this: At Spa in 1973 Jacky Ickx’s pole position lap averaged 163.7mph – not only the fastest lap of old Spa (quicker than the F1 cars had been!), but the fastest lap of a road course of all time – a record that still stands to this day.

The early days of Group C were dominated by Porsche as its 956 won pretty much everything. But it wasn’t the fastest Group C – far from it. That honour fell to the gorgeous Lancia LC2.

Driven by a plethora of Italian F1 stars such as Michele Alboreto, Alessandro Nannini, Ricardo Patrese and Teo Fabi, the Ferrari-powered cars took pole positions here, there and everywhere in the WSC, but were just too fragile to get to the end of the race. When they did get to the end results were usually good and they picked up a few wins, but unsurprisingly Le Mans success eluded it.

In 1984 Lancia swept the front row in qualifying at La Sarthe, a whopping 11 seconds quicker than the Porsches. At half-distance one of the cars was not only still going, but it was leading. Lancia’s hope of winning soon ended though as gearbox issue dropped the cars out of contention. It was a similar story the following year, and by the end of 1986 Lancia pulled the plug on its sportscar programme. Privateers continued with the car into the early 1990s but by then it had stopped being competitive.

A Nissan R90C driven by Mark Blundell is responsible for one of the most brutal laps of Le Mans ever. In qualifying for the 1990 race his car had a mechanical issue which caused his car to push out too much power – as if there is such a thing. Instead of the expected 800bhp, the 3.5-litre twin-turbo V8 was pumping out over 1100bhp!

Blundell was called into the pits to fix the issue but pulled his radio out and carried on, setting a lap that ended up being six seconds quicker than anybody else could manage. His car wasn’t even set up for qualifying!

Nissan had thrown the kitchen sink at trying to win Le Mans in 1990 by entering five R90Cs and a couple of older R89s, but despite the cars being competitive on pace reliability issues prevented them from being serious challengers, and Jaguar romped home to a 1-2 finish; the highest-placed Nissan was only fifth. However the abiding memory of the race had been Blundell’s sensational pole lap, and it ensured the R90Cs entry into the pantheon of legendary Le Mans cars.

Looks are entirely subjective thing, but even so it’s hard to argue against the Ferrari 330 P4 being one of the prettiest Le Mans racers of all time. It was a great car too, dominating that years Daytona 24 Hours and winning the 1967 WSC.

It was very competitive at Le Mans as well, but unfortunately for Ferrari Ford had brought the Mk.IV version of its Ford GT40 along, which was quicker thanks to sheer power. Although Ferrari had reliability on its side it wasn’t enough and Ford took the second of its four consecutive Le Mans wins.

Unfortunately the gorgeous P4s only got the one attempt at Le Mans as rule changes for 1968 outlawed it.

The Sauber C9 had won Le Mans in 1989 and was an all-round great car. It’s successor, the C11, was a better one however, and represented the ultimate in Group C machinery. It had everything – massive power, fuel economy, brilliant handling and near-bulletproof reliability. It was everything a driver could want from a racing car and it dominated the 1990 championship.

However Le Mans wasn’t a part of the championship that year so Mercedes withdrew in protest. The C11s had their chance in 1991, and were dominating the race until both cars hit problems, allowing the Mazda 787B to take a famous victory. Is it a travesty that during endurance racing’s most diverse and exciting era that its best car couldn’t win the biggest race of all? Probably. But that’s part of what makes Le Mans so special.

The Lola T70 is one of the great sportscars of all time but circumstances prevented it from being able to achieve success at the highest level. The car won many races at lower levels and in Can-Am, and took its most prestigious victory at the Daytona 24 Hours in 1969.

A lack of interest from any of the top teams meant it never quite got the development and preparation it needed to succeed in major events. A brief partnership with Aston Martin in 1967 was meant to be the turning point but it went so badly that the project was canned before it could really get going.

Reliability was a frequent bugbear – a particular issue was that the fuel in Europe was of a lower grade than that used in America, which led to all sorts of issues with the Chevrolet engines in longer races. Development of the car continued but any chance of bigger success ended with the arrival of the Porsche 917.

It’s weird to think that there was a time when Porsche were the underdogs in endurance racing, but until the 917 appeared that’s exactly what they were. Before the 917 came the 908, which was Porsche’s first attempt at building a prototype with the maximum permitted engine size of 3-litres.

It first appeared in 1968 and wasn’t as good as Porsche hoped, perhaps in part because the company had shifted focus to the upcoming 917 programme. But when the 917 appeared in 1969 the 908s started to get results. At Le Mans Porsche came within a few seconds of winning its first Le Mans 24 Hours – A 908 was leading on the last lap but suffering from brake problems, which allowed the Ford GT40 of Jacky Ickx to pass it and win in one of the closest finishes in the history of the race.

Several other wins for the car meant it captured the WSC title for Porsche, but in the following years it was the 917 that would give Porsche its first Le Mans victories. The 908 carried on however, and in Spyder form it was particularly adept at tight and twisty races such as the Nurburgring 1000kms and the Targa Florio. It was still winning as late as 1980, cementing its place as one of the great sportscars of all time. If only the brakes had lasted a lap longer at Le Mans…

In the late 1990s manufacturers went bonkers with the GT1 regulations and produced cars more akin to full-blown Le Mans prototypes than the road car-based category it was meant to be.

The Toyota GT-One was the zenith of the category. One such example of Toyota’s creative interpretation of the regulations related to the boot space. Rules stated that all cars had to have a designated storage area which could carry a suitcase, and Toyota somehow managed to successfully argue that when the fuel tank was empty a suitcase could fit inside it! How’s that for exploiting a loophole?!

The GT-One was ferociously fast too, and could easily have won Le Mans on the two occasions it raced there. In 1998 the car challenging for the win suffered a gearbox failure, but 1999 was where the real heartbreak lay. In the closing hours a Ukyo Katayama’s GT-One was homing in on the leading BMW at a rapid pace when he suffered a puncture, ending Toyota’s chances of victory.

Ferrari pulled out of prototype racing at the end of 1973 in order to focus on F1, but 20 years later a Ferrari sports prototype was seen at race tracks once more – although it had actually been built by Dallara and wasn’t run by the Ferrari factory team.

The 333 SP was powered by a 4-litre V12 derived from Ferrari’s F1 powerplant at the time and it won although it won pretty much every championship and every major sportscar race, it never really did that well at Le Mans. One ran competitively in 1996 before retiring, but its best finish was only a distant 6th in 1997.

There were two main variants of the Porsche 917 which raced at Le Mans – the short-tailed 917K, which handled better but was slower on straights, and the long-tailed 917LH, which had a low drag setup to maximise straight-line speed but was less stable in the bendy bits. In 1971 Porsche wanted to test a car that combined the best of both and the result was the 917/20.

The problem was it was so ugly that sponsors Martini didn’t want to have its colours on the car, so it was painted to resemble a butchers’ diagram of a pig, lending the 917/20 it’s nickname of ‘Pink Pig’.

In that years Le Mans (it’s only race) the car qualified well and was making its way up the field, but the normally-diligent engineers had overlooked something: because the car was faster in a straight line it was also heavier on its brakes. As a result it crashed out at half distance with brake failure, but its performance up to that point had proved that Porsche were onto something.

Unfortunately the 917 become obsolete at the end of the year thanks to rule changes, and the lessons learned never got to be fully realised. Still, the Pink Pig remains one of the most interesting – and amusing – cars to ever race at Le Mans. 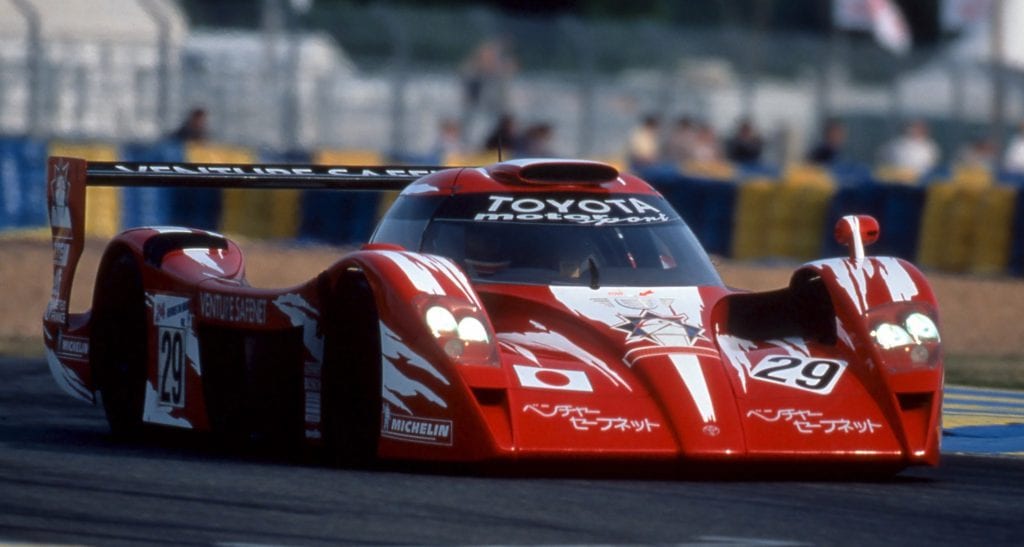