With the news that McLaren is running a one-off Gulf livery for the 2021 Monaco Grand Prix, we wanted to look back at some other iconic designs that teams only used for a single race.

In support of the ‘Wings for Life’ charity, Red Bull Racing ran a campaign giving fans the chance to have their pictures on the car for the 2007 British Grand Prix. The car was almost completely covered in fan photos, and all profits were donated to the charity.

The team did a similar livery a few years later for the 2012 race at Silverstone, except this time it followed more of the traditional red, yellow and blue colour scheme we are used to on the car.

Rumour has it that if you look closely enough, some fans submitted photos of other drivers to appear on the car. Time to get that magnifying glass out, I think!

This Red Bull livery was promoting the new Hollywood film ‘Superman Returns’. The car ran the livery in Monaco for the 2006 race. Before the race, Christian Horner said if the team got their first podium, he’d jump into the swimming pool naked. Unfortunately for him, and the eyes of racing fans around the world, guess who got their first podium? Yep, Red Bull.

DC even wore the red cape on the podium. Fair play.

Another movie-themed Red Bull Racing livery, but this time featuring the sixth Star Wars film. The team went all out with the theme and even had their pit crew dressed as Clone Troopers. AMAZING!

This wouldn’t be the only time we had a space invasion in Monaco, with Renault also running a special Star Wars sticker on their car at Monaco in 2017 to celebrate the first film’s 40 year anniversary.

May the downforce be with you. We’re sorry.

David Coulthard ran a unique one-off livery for his final race in Brazil 2008. The unusual white Red Bull ran a ‘Wings For Life’ sticker as DC was appointed as an ambassador for the charity.

Red Bull have a close relationship with the charity, as you will see through various one-off liveries. It was founded by Red Bull owner Dietrich Mateschitz and motocross rider Heinz Kinigadner, whose son suffered a spinal cord injury as a result of a motorbike accident.

Unfortunately, the livery didn’t bring Coulthard much luck as he crashed out early in the race.

Although Red Bull didn’t change the livery on the car dramatically, it did feature a load of 007 stickers and some iconic James Bond number plates on the rear wing. The livery was changed to celebrate F1’s 1007th race. See what they did there?

To be honest, we just wanted another excuse to show off the brilliant race suits Max Verstappen and Pierre Gasly got to wear for the race.

The 2001 Italian Grand Prix was the held just five days after the September 11th terrorist attacks. There were calls for the race, and all international sporting events, to be cancelled as a mark of respect.

Many teams used stickers and changed their liveries, including Ferrari. The team ran without any sponsorship and had a matte black nose cone as a mark of respect. Ferrari drivers, Rubens Barrichello and Michael Schumacher also wore plain red overalls.

Ferrari also ran a retro burgundy livery for their 1000th Grand Prix at Mugello in 2020. They’ve also raced in blue before, after a disagreement with Enzo Ferrari, the FIA and Italy’s national motorsport body. Seriously, we had blue Ferraris for the final two races of the 1964 season.

It was meant to be the perfect weekend for Mercedes – it was their 200th F1 race as a constructor. The whole team was dressed up to commemorate the occasion in addition to the one-off livery. The Silver Arrows even invited Netflix to film them over the weekend for the first time!

However, it ended up being one of the worst weekends for the F1 team. Ever. Valtteri Bottas crashed in the race, with Lewis Hamilton taking an unplanned pitstop which left the team embarrassed and scrambling for some new tyres and a front wing. It was a clown show.

Even Team Boss Toto Wolff admitted the whole weekend couldn’t have got much worse.

Don’t go playing with your contrast. This really is a yellow McLaren.

The car ran this special livery at the 1986 Portuguese Grand Prix to promote the title sponsors new product, ‘Malboro Lights’. It took a new twist on the iconic red and white livery we all know and love.

Once again, this temporary livery didn’t deliver the team much luck. Keke Rosberg retired from fifth with an electrical failure just past half distance.

This story honestly deserves its own movie, which is appropriate considering the Hollywood blockbuster it was promoting. Back in 2004, for the Monaco Grand Prix, Jaguar ran a one-off livery for the new Ocean’s 12 film.

As well as a change to their livery, the team also had a $300,000 diamond secured into the front nose. Yep. We’re not kidding. Someone decided it would be a good idea to place a diamond into the car’s nose cone at the most challenging street circuit in the world.

Jaguar driver Christian Klien crashed into a barrier during the race apparently dislodging the diamond. It was lost, just like that. Did it disappear down a nearby drain? Did a marshal spot it and hide it in their pocket? Was it all just a big publicity stunt for the movie? We’ll never know.

McLaren are the latest team to run a one-off livery at the Monaco Grand Prix.

The team will use the well-know pale blue and orange Gulf livery that has been seen throughout motorsport for decades. McLaren and Gulf have a long history together too. Their partnership started towards the end of the 1960s and has seen several different projects since then. As well as working together in F1, the duo also worked together in the Can-Am series and Le Mans 24 Hours – with the McLaren F1 GTR featuring this iconic Gulf livery throughout the ‘90s.

Let’s hope this Monaco livery brings the team plenty of luck around the street of Monte Carlo this weekend.

Which one-off livery has been your favourite? Have we missed any out? Let us know in the comments below. 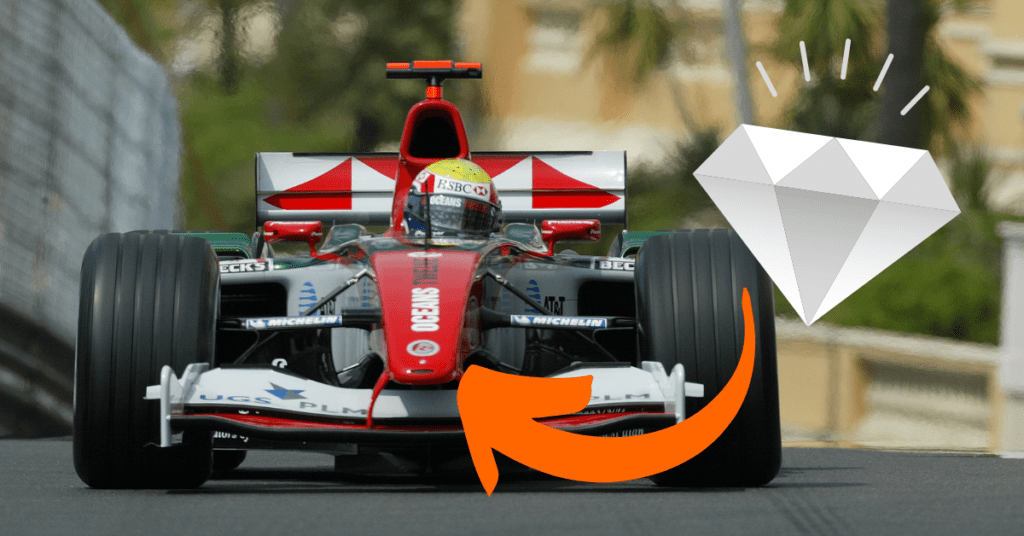