10 Of Hamilton’s Most Memorable McLaren Moments

20 years ago, a talented 13-year-old karter was signed up to McLaren’s junior programme. Nine years later – having won pretty much every junior series on the way – he was an F1 driver. He instantly made his mark by sweeping around the outside of Fernando Alonso at the first corner of his first race.

His six seasons with the team saw him win a championship and 21 races before making a very well-timed switch to Mercedes. But despite the good times, there were also some very bizarre high-profile blunders and controversies. Here are 10 of his most memorable McLaren moments, good and bad.

Hamilton enjoyed a remarkable start to his F1 career, with a third and four second-places coming from his first five races. In his sixth, at the Canadian Grand Prix, he took a comfortable pole position and commanded the safety car-filled race on his way to his first victory.

He followed it up a week later with another win in the US GP at Indianapolis ahead of a very rattled Fernando Alonso. Two more wins and other strong results left him as strong favourite for the title with two races to go – until…

Hamilton’s first retirement couldn’t have come at a worse time – or in a more embarrassing manner. Battling with Kimi Raikkonen for the lead at a damp Shanghai circuit, he only needed to finish second to the Ferrari driver to clinch the title, but McLaren decided to go for the win. Keeping Lewis out on worn inters for supposedly the best strategy, his pace eventually dropped off so much that Kimi passed him. When he eventually came in for his stop his tyres were down to the canvas, and he slowly slid into a tiny gravel trap in the pit entry. His car was beached, and he was out.

He was still favourite heading into the final race at Interlagos but dropped back after running wide on the first lap. One gearbox issue later, and his chances were all but gone.

Has Hamilton ever put in a better drive than this? After banging wheels with teammate and pole-sitter Heikki Kovalainen at the start of a soaking wet British GP, Hamilton soon got ahead and roared away from everyone. At times he was the fastest guy on track by some five or six seconds a lap, and whilst title rivals Raikkonen and Felipe Massa endured a nightmare race, spinning here, there, and everywhere, Hamilton kept his cool to win by a massive 68 seconds from Nick Heidfeld’s BMW-Sauber.

It was one of the most exciting races in a year full of exciting races. With the rain coming down in the dying laps of the Belgian GP, Kimi and Lewis were engaged in an epic battle. At the Bus Stop chicane, Hamilton went for a move, but Kimi squeezed him wide and forced the McLaren across the run-off. Hamilton backed off, gave the place back, and then immediately launched it up the inside of La Source.

Kimi crashed on the next lap and Hamilton won the race. It was a real thriller – or at least, it was, until the stewards got involved. They decided that Hamilton’s corner cut gave him an advantage (even though he’d given the place back) and penalised him 25 seconds, dropping him back to third. Fans took the decision hard, but other drivers agreed with the penalty. Right or wrong, it certainly took the shine off of what had been a cracking race.

A classic bit of commentary for one of the greatest title deciders of all-time. In a rollercoaster of a race Hamilton was going to be champion, then he wasn’t, and with a few corners to go it looked like he was going to miss out in Brazil for the second year in a row. However, Glock’s strategy of staying on a wet circuit with slicks stopped working just a bit too soon for Massa’s sake, and Hamilton was able to regain the position he needed to take the title – on the last corner of the last lap of the last race of the season.

McLaren hadn’t built a good car in 2009, but the season-opener in Melbourne was a bit of a crazy race and Hamilton managed to finish fourth. That became third when Jarno Trulli (who’d started from the pit lane) was penalised for passing Hamilton behind the safety car. A decent result, all done-and-dusted, let’s move on, right?

The trouble is, McLaren had told Lewis to let Trulli ahead, believing that to be the correct order. That’s not what Hamilton and engineer Dave Ryan had told the stewards, though. When they realised they’d been lied to, Hamilton was disqualified and Trulli promoted back to third. The thing is, if they’d just been honest Lewis would have been given the third place anyway since that should have been the correct order. Ryan was sacked for his part in proceedings and Hamilton’s reputation took a huge hit as a result.

After taking what would turn out to be his only pole of the year (seems unthinkable these days, doesn’t it?) Hamilton had to bring his car to a stop on his cooldown lap to ensure he would have enough fuel left for the FIA to take a sample after qualifying.

After surfing his car down the back straight he got out and pushed it for a bit until he was rescued by some marshals and the medical car. Because F1 doesn’t like to allow fun moments, Hamilton was reprimanded and the team fined $10,000 for completing the cool-down lap too slowly. He at least got to keep his pole, though.

2011 was definitely Hamilton’s worst season as he seemed to lose focus, both on and off the track. Although some of his wins that year (like China and Germany) are among his very best, he also had some serious low points – most of which involved Felipe Massa.

The 2008 title rivals made contact on six separate occasions during the year – at Monaco, Silverstone, Singapore (twice), Suzuka, and in India, leading to suggestions that the two cars were magnetically attracted to each other or something.

It wasn’t just Massa he found himself crashing into, either – Kamui Kobayashi, Pastor Maldonado, and even teammate Jenson Button ended up making contact with Lewis. Things were already so bad by Monaco that Hamilton, after another trip to the stewards’ office, was asked why he was getting in trouble so much. He responded with an Ali G quote: “maybe it’s because I’m black”. A joke? Absolutely. A badly thought out one? Oh yes.

Some sort of social media controversy seems to crop up for Hamilton every year. Following a bad qualifying at Spa in 2012 (he was eighth, Button was on pole) he took to Twitter and posted his car’s telemetry in an attempt to prove it was his setup and not his driving that was responsible for the eight-tenth gap between the two. He quickly removed it at the request of a furious McLaren. A few weeks later, he signed for Mercedes.

Hamilton’s final years with the team weren’t all bad, though. His last win for McLaren came at COTA after a sensational race-long with Sebastian Vettel. He stuck to the Red Bull for most of the race, but couldn’t get close enough through the twisty first sector to set up a move on the back straight. But on lap 42, Vettel’s best mate Narain Karthikeyan in the HRT held him up. It was the once chance Hamilton had and he took it, making the pass and holding on to win. 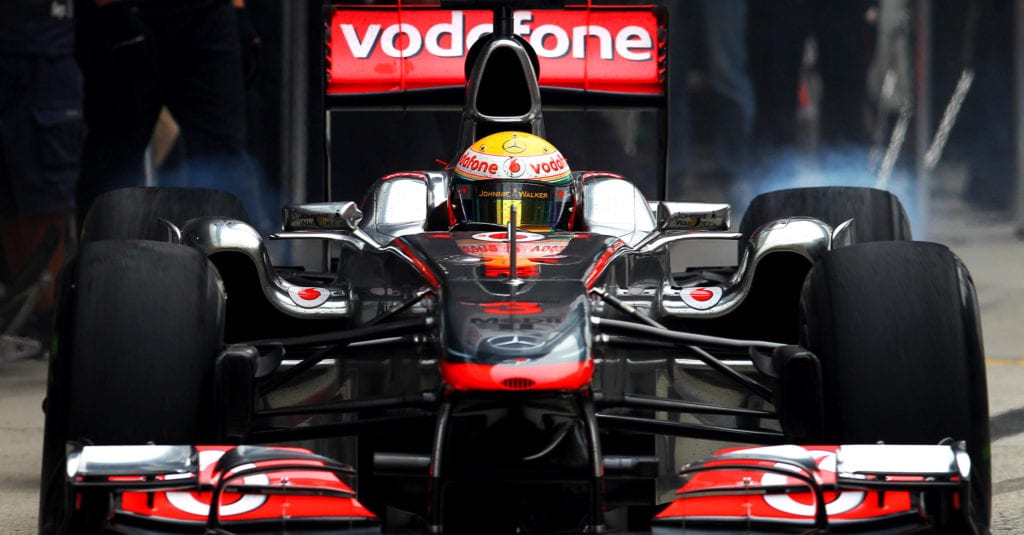