‘Who cares what Villeneuve thinks?’ is a common fan response whenever the Canadian speaks his mind about the latest goings on in F1. But he’s not some rambling ex-driver sitting in a chair in the corner and shouting things people don’t want to hear, like a distant family member who’s had too much to drink at Christmas. He works as a proper pundit for Sky Italia and people in the paddock ask for his opinions precisely because he’s not going to give a vanilla response.

Quite often, he speaks a lot of sense, and other times he has very interesting and alternative takes on things which open up new avenues of seeing things. Other times, however, he comes out with some particularly outrageous takes which make you wonder if he’s just having a joke at everyone else’s expense. Here are 10 of our favourites from over the years – you be the judge of which category each one fits into…

The hype around Fernando Alonso’s Indy 500 debut in 2017 was off the charts. During the Monaco GP weekend a number of drivers said what they thought of his decision to go and race on an oval for the first time. Some were supportive, others didn’t see the point of it – especially since he was missing a grand prix to go and do it.

One of those was Nico Hulkenberg, who said it was “dangerous” and that he couldn’t understand why Alonso would go and do such a race with so little preparation.

Villeneuve, who has raced pretty much everything during his career (most of which with success) took the opportunity to slam two drivers with one comment. Speaking about Hulkenberg’s thoughts, he said:

“It sounds like excuses. I think there are two classes of drivers. You’re either an Alonso or you’re a Rosberg. And Hulkenberg is a Rosberg.”

In whatever you’re doing, chances are you can do it better if you learn from the best – but not in JV’s eyes.

Despite the odd impressive performance, Lance Stroll’s debut season in 2017 was actually pretty poor as he frequently qualified badly and then raced even worse. But instead of offering his countryman a friendly ear and words of encouragement, Villeneuve instead spent most of the season criticising Stroll. After the 18-year-old scored the first points of his career in the 2017 Canadian GP, Villeneuve called him one of the worst rookies in F1 history. Ouch.

He had more of a reason to be critical after that year’s Brazilian GP, when Stroll finished last and was comfortably lapped by teammate Felipe Massa. After the race, Villeneuve felt his woeful performances would be improved if he had… a slower teammate?

“He needs to figure something out. Maybe a new teammate will be helpful. A slower teammate. He needs to find a way to go faster.”

Sergey Sirotkin replaced the retiring Massa the following year and Stroll did alright, so maybe Villeneuve had a point. But our favourite thing about this quote is that he offers no reasoning as to why a slower teammate would help, just that it would.

There’s nothing unusual about ex-drivers complaining about the current state of F1. ‘It was better in my day!’ is the opinion that’s often banded about. It’s no surprise that Villeneuve has complained vociferously about F1 rules – the difference is that he did it during his F1 career, often with eye-opening levels of bluntness.

In 1997, the FIA announced a raft of rule changes for 1998. Grooved tyres would replace slicks and the cars would become narrower and slower, all in the name of reducing speeds and making the sport safer. After some initial testing, Villeneuve decided he wasn’t a fan of this and publicly declared the changes to be “shit”, adding:

“These new regulations are just a joke. To run on these tyres is just ridiculous. It takes all the precision out of the driving and the racing – as well as the fun – and it is just a ridiculous idea.”

The FIA wasn’t a fan of him speaking out against the sport and remarkably made him attend a World Motorsport Council meeting in Paris to explain himself, where he was threatened with being suspended. All this in a year where he was the Williams Number One and fighting for the championship!

Remember when Kimi Raikkonen ran into the back of Lewis Hamilton at the start of the 2018 British GP? Raikkonen was handed a 10-second penalty, which already seemed a touch harsh because Sebastian Vettel only got a five-second penalty for a very similar incident with Valtteri Bottas in the French GP earlier that year.

As well as lamenting the need for stewards to get involved with mistakes, Villeneuve claimed Raikkonen’s penalty was harsher than usual because of the person he hit:

“They decided that it’s Lewis, we’re in the UK, he’s fighting for the championship, that’s worth 10 seconds. If it had been Bottas, it would have been five seconds, that’s the thing.”

Robert Kubica’s return to F1 in 2019 was the culmination of a remarkable journey which saw the talented Pole unexpectedly return to F1 following his horrific rallying injuries in 2011.

It’s hard not to be amazed by the guy – and yes, even Villeneuve was happy for Kubica, calling it an “unbelievable achievement”. However, he then added that it should not be possible for a driver with a disability to be able to race in F1:

“Formula 1 should be the pinnacle of racing, it’s the king class. Then it is not good for the sport if anyone with a disability can participate. At least not in Formula 1, perhaps in other classes. Formula 1 must be tough, must be difficult and almost unreachable. Robert’s return is not the right message.”

The 2018 German GP was perhaps the pivotal race of the season as the balance of power in the championship tipped from Vettel to Hamilton over the course of the weekend.

Hamilton’s eventual win from 14th on the grid following qualifying issues was a superb drive, but Villeneuve thought the Brit’s attitude surrounding the whole weekend – on-track, off-track, and on social media – was very unusual, saying:

“He confuses Formula 1 with Hollywood. Everything he does is staged. He portrays himself on social media like he is Jesus.

“The way he knelt next to his car after his problem in qualifying looked like the suffering of Christ. And what he said afterwards was the Sermon on the Mount. Then he gestured so dramatically on the podium that everyone could see who sent the sudden rain.”

During a safety car period in the 2017 Azerbaijan GP, Vettel thought Hamilton brake tested him. In a fit of red mist, he pulled alongside the Mercedes and gently bumped into him. Regardless of the speed, intentional contact is a huge deal and even though Vettel received a stop-go penalty (the harshest penalty before a disqualification), many thought the stewards should have come down on him more severely.

Not Villeneuve. He thought it was just an accidental consequence of Vettel waving his arms around, as well as ignoring the fact that FIA data proved Hamilton hadn’t suddenly braked:

“Whenever a driver did that to me [brake-testing], then I would do whatever Seb did. He got a penalty, the biggest he could get, I guess, according to the new rules. I don’t think he was trying to hit him. He had one hand on the wheel and was looking at him and pointing the finger. You don’t hit with your wheels turned like that, you will break your own car, and with one hand – if you’re going to hit someone, you have two hands on the wheel!”

He added that the move was “not sportsmanlike, but good to see,” which seems slightly contradictory. It’s an unusual stance from a man who was once on the receiving end of intentional contact…

Teammate rivalries in F1 aren’t uncommon, but they usually take a few months or even years to develop, and usually happen when a championship is on the line – not between a new pairing of drivers for a midfield team before the start of a season.

And yet, when Jenson Button joined Villeneuve at BAR in 2003, the Canadian wasn’t having any of it. He reportedly made no effort to speak with his new teammate and immediately tried to seize the upper hand mentally:

“I will respect Jenson once he goes quick on a race track. Some drivers will be very fast but will be very weak mentally, then you do not respect them either. Human strength is probably more important to respect than pure speed.”

Then, in the first race in Australia, there was an incident in the pits where Button claimed Villeneuve had deliberately blocked him in the pits. Villeneuve’s response was to once again go on the attack:

“I was highly, highly disappointed to be blasted by my teammate in the media when coming out of the car he was all smiley and shaking hands and everything. I found that a little bit weak but I guess that’s what I have to cope with now – a weak teammate. I’ve been working my butt off for this team for four or five years then somebody arrives and blasts me for what wasn’t under my control. That’s a little bit freaky.”

The two made up later in the season (publicly, anyway) and Villeneuve later said the feud was fuelled by team management. But still, slating your own teammate before you’ve even raced together seems a little bit extreme…

Vettel’s five-second penalty for an unsafe rejoin in the 2019 Canadian GP, costing him the victory, was one of the most controversial and widely derided penalties in F1 – the argument being that Vettel was correcting a slide, not intentionally blocking his rival.
Many ex-drivers sympathised with Vettel, JV being one of them. However, he suggested that Hamilton was so aware of what was going on that he deliberately placed his car in an awkward position on the outside so as to increase the likelihood of the Ferrari driver being penalised:

“The guys behind know ‘this guy is in the grass, he’ll probably get sideways, the chances are I’ll be squished… OK, I’ll go for the inside.’ You know it. Lewis did the right thing, he managed to impose a penalty on Vettel. He’s very good at that!”

Sirotkin got the nod to partner Stroll at Williams in 2018, leaving Kubica in the position of the team’s third and reserve driver. Now, anyone in a reserve driver role would probably rather be racing, so Villeneuve came up with a theory on what Kubica could do in order to find a way to get promoted:

“Robert is the driver who will most develop the car, and it’s possible he will consciously make it difficult to drive for the other drivers. His dream is to race the car, not to be the third driver, and so I do not underestimate this point. In his situation I would do exactly the same.”

I mean, Villeneuve saying he would do it is either a giant piece of bait or a hint that third drivers up and down the pit lane have done this sort of thing in the past. 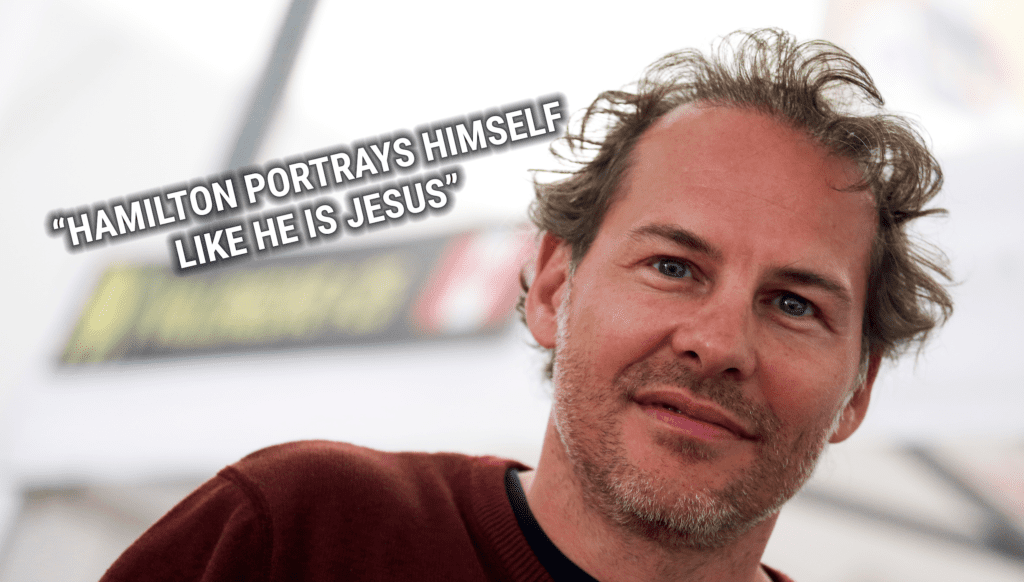