The fact that F1 drivers will no longer face any restrictions on how many helmet designs they can use in a season will be welcome news to most of them – and probably Vettel in particular.

During his championship years with Red Bull, he and helmet painting masters Jens Munser Designs would wheel out a new design at seemingly every race – in 2011 alone he used a staggering 16 different designs.

Even when the helmet change ban was in force from 2015 to 2019 they found ways to come up with interesting one-offs, so in anticipation of what could well be another era of various Vettel helmets, we thought we’d pick out 10 of his best.

A lot of modern helmet designs can be a little bit fussy and over-complicated, but the simple dark blue with gold accents on this design (the two gold stars on top represent his two championships at the time) just looks so fantastically clean. Unfortunately, we only got to see it once, because Vettel won the Korean GP while wearing it and back then, he’d ‘retire’ any helmets he won races with.

OK, it’s black and the Red Bull logo is all glittery, which is kinda cool, but you had to wait until dark to see the real party trick of this helmet.

Yep, it friggin’ lights up. A bunch of LEDs were positioned on the top and hooked up to a small battery encased within the helmet, causing them to flash for the entirety of the race. Unfortunately, we’ll never see anything like this again – following the race the FIA banned the use of lights and batteries on helmets, which doesn’t seem that surprising. In fact, it’s almost incredible that it was allowed to happen in the first place.

What would a helmet look like if it was made out of wood? Errm, something like this. Probably. It’s a great effect – not just because it actually does look like wood (especially on the visor), but because it’s not often that you see a brown helmet.

In October 2012, the Red Bull Stratos project saw Felix Baumgartner (no relation to Minardi legend Zsolt Baumgartner) jump out of a balloon from a height of 24 miles in the air, the highest-altitude jump in human history, and achieve a speed on his way down of 834mph.

It was an incredible feat and at the start of the 2013 season, Vettel paid tribute with a helmet made to look like the pressurised helmet used by Baumgartner.

The details really make it – the various wires and tubes at the back look like actual wires and tubes. Vettel used it as he won the Bahrain GP, his second victory in a season where he, like Baumgartner, would go on to break all sorts of records.

If there’s one race where you’d expect to see some flashy one-off helmets, it’s Monaco – and Vettel and JMD really knocked it out of the park in 2013. The off-white base and classic script are cool enough, but then there are the classic images on the top:

The real stand-out feature was on the back, however. At first glance, it just looks like a standard 1950s pin-up girl…

…except that in this instance, her clothes were made from special paint which went transparent when the temperature changed. So basically, when Seb’s helmet became hot, the woman became naked – which doesn’t sound dodgy at all.

For the Brazilian GP, Vettel decided not to pay homage to Ayrton Senna or Emerson Fittipaldi or Nelson Piquet, but that other great Brazilian F1 icon… the country of Austria. Wait, what?

The reasoning behind it was that earlier that year, F1 had announced that the Austrian GP would be returning to the calendar in 2014. And given that the track is called the Red Bull Ring and that the team is Austrian, it only seemed appropriate to celebrate the news with this colourful and whimsical postcard-style scene.

If modern helmets were made of metal and one was left outside for a few decades, what would it look like? This, probably – the flaking paint uncovering a rusty base is a seriously cool effect.

A year on from his saucy design, Vettel rocked this incredible solid bronze-looking helmet in the principality. It’s an incredible effect which, like the wooden one from 2012, actually looks like it’s made of bare metal, in this case, the result of the whole thing being coated in a thin layer of metal paint.

Vettel was criticised by many for his helmet changing antics, with some believing that a driver’s helmet design was a part of their identity that should remain constant throughout their career. Ironically, when the helmet change ban was introduced in 2015, Vettel ended up with one of the most iconic modern designs of all-time with his simple white design with the German flag – itself a tribute to his hero, Michael Schumacher.

Soon, the realisation dawned that as long as the basic colour scheme and design remained the same, you could make small changes to the design, leading to a small renaissance of Vettel having different (but more subtle this time) helmet designs.

The highlight of 2017 was his Japanese one – a gorgeous hand-painted tribute to all things Japanese. Sadly, it didn’t serve him too well – his car broke down after just four laps, all but ending his title challenge.

Proof that even with the restrictions on helmet changes, Vettel and JMD could still come up with absolutely sensational variations on a theme to the point where this surely rivals the best from his Red Bull days.

Made to resemble the homemade helmet paint jobs of the 1970s, masking tape and stencils were used when applying the paint to give it a very rough and ready look, with painted-on stone chips, dead insects, and scuffs and scraped making it look decidedly second hand.

It’ll be interesting to see what they do this season now that the ban has been lifted. Has Vettel’s helmet design become so much a part of him that he’ll stick with the subtle variations? Or will he go back to doing all sorts of crazy stuff just for the hell of it? Perhaps another driver will take up the mantle of F1’s serial helmet changer. Whatever happens, we can’t wait to see what everyone’s got in store. 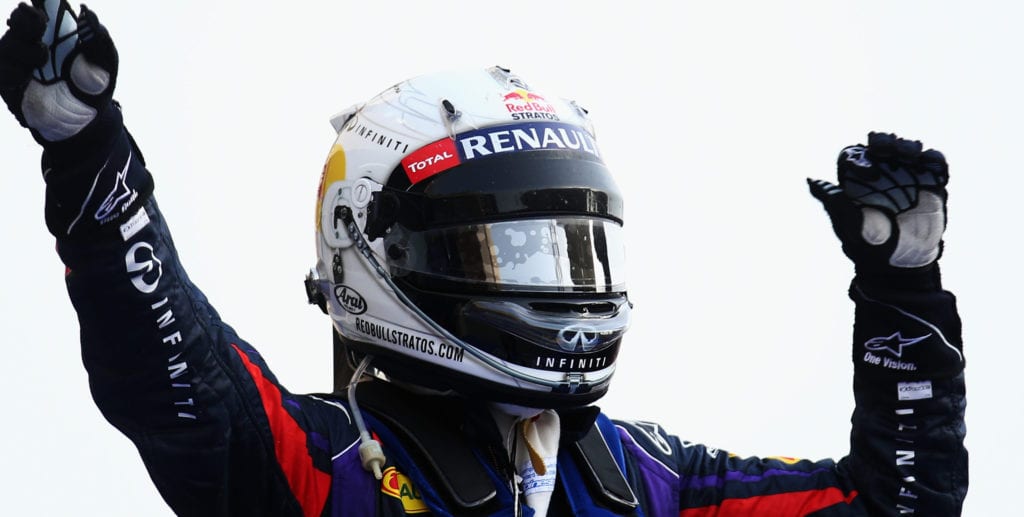 The Best Helmet Designs From The 2020 F1 Season