10 Of The Best Left-Handed Corners In Motorsport

It’s International Left-Handers Day today (because of course there’s an international day for everything) so to mark the occasion, we’ve come up with a list of some of the best left-handed corners in motorsport.

With one exception, we’ve not included anything that’s part of a chicane or a wider sequence of corners, such as Silverstone’s Maggotts/Becketts complex and the Corkscrew at Laguna Seca, even though they are undoubtedly amazing.

Suzuka is basically an endless stream of fantastic corners and the first great left-hander that springs to mind is probably 130R. However these days (in an F1 car at least) it’s not as much of a challenge as it used to be and for us, it’s the double-apex Spoon curve just before it that makes the eyes pop.

Two apices not enough for you? How about four. Turn 8 at Istanbul Park instantly became so iconic that most F1 fans will know which corner you’re talking about simply by saying ‘Turn 8’. As well as being almost flat out, Turn 8 was long, bumpy, undulating, killed tyres and tested a drivers’ neck muscles to the limit. If there’s one reason to wish the Turkish Grand Prix was still on the calendar, this is it.

We couldn’t not include the awesome Mount Panorama circuit at Bathurst in this list, but which corner do you choose? Forrest’s Elbow is iconic, and The Chase at the end of the Conrod straight is always an action zone, whatever the race.

In the end, we settled on McPhillamy Park. The highest point on the course, right at the top of the mountain, seeing cars charge over the crest and through McPhillamy Park – especially on a qualifying lap – is one of those things that always reminds you why you love motorsport.

Loews Hairpin, Fairmont Hairpin, Grand Hairpin, Station Hairpin… whatever you want to call it, Loews is by no means the fastest or most challenging corner at Monaco. But that camera shot overlooking the hairpin as the cars squirt down from Mirabeau, clumsily negotiate the slowest corner in F1, and then power around to Portier is an image so iconic that it would have been a sin to omit it.

Oval tracks are all left-handers, so what makes any of them special? Well, if being the first corner at the biggest single-day sporting event in the world isn’t worthy of inclusion, then what is?

Whether you’re watching a driver barrel into it at 240mph in a qualifying or seeing a three-wide battle for the win on the final lap, there’s nothing like Turn 1 at Indy.

Yep, it’s Indianapolis again, but this time we’re talking about the sharp left at the Circuit de la Sarthe. It’s perhaps the most difficult turn at Le Mans, given that drivers approach it from over 200mph and have to tackle the banked right-hander before it before slamming on the brakes.

Indianapolis itself is heavily cambered, very narrow, poorly lit and has very little runoff. Drivers have to negotiate it all whilst lapping traffic, in the dark, and in the rain. Probably.

Being an old-school, anti-clockwise circuit, Interlagos has plenty of excellent left-handers, but we’ve gone for Turn 3 – the Curva do Sol. Being essentially an acceleration zone out of the superb overtaking opportunity that is the Senna S, you frequently see cars going side by side through the corner.

The real treat comes when it’s wet, though. Who can forget the river flowing across the circuit that caught out several cars in 2003? Or when Max Verstappen passed Nico Rosberg around the outside?

Bear with us on this one. Sochi isn’t the greatest track and in F1 it hasn’t produced the best races, but the super-long, off-camber Turn 3 is definitely an interesting corner. Because it’s so long there are a few different racing lines available. As a result, it’s been the scene of plenty of action in the track’s short history – and not just in F1, but in GP2 and GP3 as well.

How do you pick the best corner on a circuit with over 100 of them? The answer is ‘with great difficulty’, but when all is said and done, it has to be the Karussell.

The famous banking was initially intended to be part of a drainage ditch, but in the 1930s drivers soon discovered that dropping down onto the concrete slabs and using them as banking was the quickest way to take the corner. It’s been the preferred racing line ever since and has become one of the most iconic sections of a circuit littered with classic corners.

What are some of your favourite left-handers? Let us know in the comments. 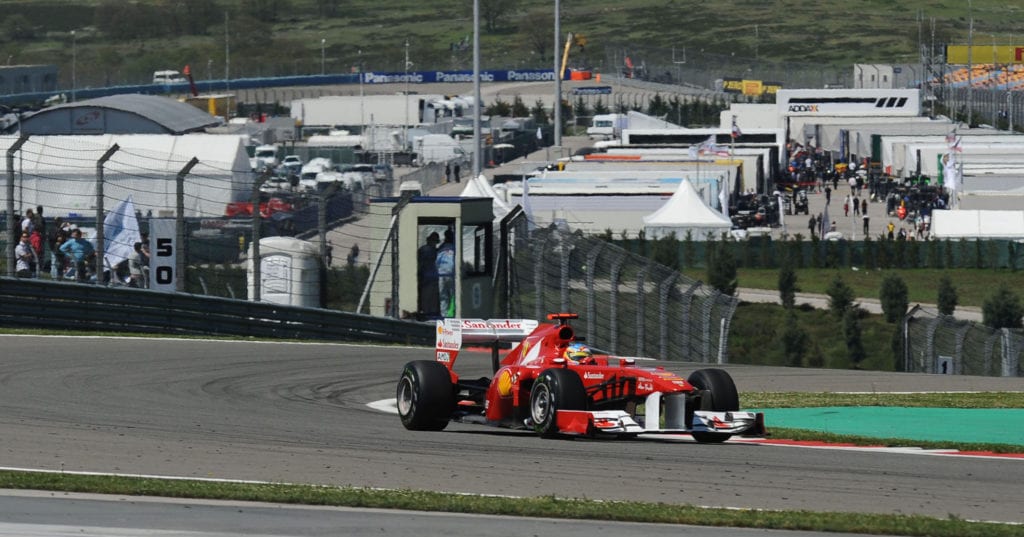