10 Of The Best Robert Kubica Moments

Robert Kubica was on the verge of Formula 1 greatness when a rallying accident early in 2011 cost him his career – and almost his life. Six years later and against all expectations he’s the favourite to be Lance Stroll’s teammate at Williams next season and it’s really, really hard not to be hyped about it.

If you’re wondering why, then here are just 10 moments that show what a great driver Kubica is.

Compared to some of his rivals Kubica actually had a rather understated junior career. His results in Formula 3 were solid if not spectacular, although out-qualifying Lewis Hamilton at Macau in 2004 gave some hint of his talent.

For 2005 he made the switch to Formula Renault 3.5 and duly dominated the championship, winning four races and scoring 154 points compared to the 116 of runner-up Adrian Valles. He was rewarded with an F1 test for Renault, but ended up signing for BMW Sauber to be the team’s official reserve and test driver for 2006.

2006 rules meant that Kubica was able to drive a third car during Friday free practice sessions, and he was consistently impressive. In fact he was so impressive that he looked a certainty to get a race seat with the team for 2007, but circumstances saw him getting his chance a little bit earlier than expected.

Jacques Villeneuve crashed heavily during the German Grand Prix and was complaining of headaches, so the team decided to sit him out of the next race in Hungary and give its young star a chance. He instantly raised eyebrows when he made it through to Q3 ahead of teammate Nick Heidfeld and although Heidfeld’s experience served him well in the changeable conditions of the race to finish third, Kubica still drove solidly to finish seventh on his debut.

Unfortunately for Kubica however his car was found to be underweight and he was disqualified, but it did nothing to detract from his drive. Villeneuve obviously saw the writing on the wall and left the team soon after. In that classic Jacques Villeneuve way, he said that he’d proven himself already and didn’t want to be involved in a shoot-out for the seat.

With Kubica now in the car for the rest of the season it didn’t take him long to show just how ready he was for Formula 1. BMW Sauber were incredibly competitive at Monza and Heidfeld qualified third with Kubica in sixth. But by turn one it was Kubica in third place and he looked every inch like he belonged there as he held off the Ferrari of Felipe Massa. He even led for a few laps during the pit stops.

He was passed by Fernando Alonso during their second pit stops, but when the Renault engine dramatically gave out a couple of laps later it left Kubica able to comfortably score a podium in only his third Grand Prix.

Kubica’s arrival at BMW Sauber forced Heidfeld to seriously raise his game, something he certainly did at the beginning of 2007. Heidfeld opened the season with a string of fourth-place finishes, but Kubica fought back at Monaco and beat the German to the flag.

At the next race in Canada it almost all came undone for the Pole. Whilst trying to overtake Jarno Trulli he clipped the back of the Toyota and speared into a concrete wall, enduring a series of rolls as the car disintegrated around him. It was one of the most dramatic crashes in recent years and put Kubica in the hospital, but amazingly he was found to have only suffered a sprained ankle and a concussion, and he was released the next day.

Understandably he was rested for the next race at Indianapolis, where his place was taken by some chap called Sebastian Vettel. Kubica was back for the French Grand Prix though and showed his resilience by qualifying and finishing fourth, ahead of his teammate. Not bad!

His accident in Canada hadn’t helped, but in 2007 Kubica was (somewhat surprisingly) generally outpaced by Heidfeld. Keen to redress the balance for 2008, Kubica upped his game. He was on the front row in Australia and finished in a strong second place in Malaysia. By the time of the third race in Bahrain it was clear that BMW Sauber were genuine contenders.

In qualifying Kubica didn’t disappoint, and he took an historic pole position – the first for a Polish driver, and the first for BMW Sauber (to date, it is the only pole for Sauber in its 25 years of F1). Any hopes of a win were quickly dashed though, as it emerged he’d qualified with less fuel than those around him and as a result he dropped back in the race. He still finished third though, just five seconds behind Felipe Massa’s winning Ferrari.

One year on from his horrendous accident at the Circuit Gilles Villeneuve, the same track would be the scene of Kubica’s first and only victory.

It was a thoroughly crazy race. Hamilton led the early stages but Adrian Sutil’s stricken Force India prompted a safety car. The leaders headed for their stops at the same time and Hamilton lost out to both Kubica and Kimi Raikkonen. A red light held them up at the pit exit, but for some reason Lewis failed to spot both the light and the two parked F1 cars and ploughed into the back of Raikkonen, with Nico Rosberg doing the same.

Kubica escaped unscathed and BMW Sauber were eventually left in the strong position of having both its cars at the front. Heidfeld was ahead but on a one-stop strategy, so he allowed Kubica (on a two-stopper) to take the lead so as not to wreck his strategy. Kubica made the most of the clean air and gained enough time to pit again and emerge ahead of his team mate. Despite the track breaking up, he cleared off into the lead to win the race.

This wasn’t only the first win for Kubica and BMW Sauber, it also put the Pole into the championship lead. But the team then took the bizarre decision to cut back on development for the rest of the year and focus on 2009. There were plenty more strong results for Kubica in 2008 but the team slipped behind McLaren and Ferrari, and he finished the championship in fourth, level on points with Raikkonen.

BMW Sauber’s decision to focus on the rule changes for 2009…didn’t work. At all. Although Kubica was on course for a podium in Australia until he collided with Vettel, it quickly emerged that the F1.09 wasn’t the most competitive car. Heidfeld managed a slightly fortunate podium in Malaysia, but it wasn’t until the second half of the season that the team regularly scored points.

Even with the improvement in pace, Kubica’s performance at the penultimate round in Brazil was completely unexpected. He qualified eighth, which doesn’t sound all that impressive until you learn that he was on a low downforce setup – and qualifying was held in the wet.

Then in the early stages of the race he found himself in third and able to keep pace with the leaders, Rubens Barrichello and Mark Webber. Incredibly Kubica was able to maintain his pace throughout the race, and third place became second as Barrichello slipped down the order.

To add to all of that it turned out he’d been nursing an overheating engine from very early in the race. Without that he might have even been able to mount a challenge for win, but it didn’t really matter, because it was still one of the finest performances from anyone throughout the whole year.

BMW withdrew from F1 in 2009 and Kubica headed to Renault for 2010. In a very close season that saw Red Bull, Ferrari and McLaren fighting it out at the front the Renault was probably only the fourth or fifth fastest car, although some of Kubica’s performances made you wonder otherwise.

Throughout his career Robert was always very good at street tracks. He won at the Norisring on his Formula 3 debut in 2003, scored a double podium at Pau in 2004 and finished second at Macau the same year. In 2008 he ran Hamilton close for victory at a wet Monaco, but it was in 2010 where he had his finest weekend at the Principality.

He absolutely wrung the neck of his Renault in qualifying to plonk it on the front row, splitting the Red Bulls. Only an in-form Mark Webber could keep him off pole. In the race he finished third after losing out to Vettel at the start, but it was still an outstanding performance across the weekend.

There were plenty more great drives that season, such as second place in Melbourne and third at Spa. Though he failed to finish he also ran well at Suzuka, showing that when it came to the tracks where the driver can really make a difference, Kubica was always right up there.

His performances in 2010 led to him being talked about as an equal of the likes of Hamilton, Vettel and Alonso as one of the very best drivers on the grid, and more than capable of challenging for championships. Sadly on the eve of the 2011 season he almost died in a rallying accident, and was left with severe injuries to his arm that left him unable to drive an F1 car again. Or at least, so he thought…

After a couple of years of recovery from his accident Kubica decided to get back into motorsport by doing the very thing that has nearly cost him his life – rallying.

Remarkably he drove with the same sort of ‘maximum attack’ attitude he had during his F1 career, leading to several spectacular moments, such as in 2013 when he seemed to develop a particular dislike for foliage.

During his time in the WRC Kubica was very impressive. He won the WRC-2 championship in 2013, and in the full-on WRC he scored points on a number of occasions and won several stages. But ultimately he was too inconsistent and too accident-prone to win a rally outright, or even finish on the podium. In 2016 his funding ran out and he went back to what he knows best – circuit racing.

Kubica’s return to circuit racing was at the 2016 Mugello 12 Hours and he qualified an impressive third, but his race was ruined by an early suspension failure.

Later in the year he went to Spa to race in the Renault Sport Trophy. He finished on the podium, thanks to an impressive lunge at the Bus Stop chicane.

That seemed to spark his interest in making a proper return to circuit racing, something he admittedly found difficult to do soon after his accident as it brought back memories of his seemingly lost F1 career.

A test for the ByKolles team almost saw him join the World Endurance Championship for 2017, though he backed out of the drive shortly before the season was due to start. Then he tested a GP3 car, a Formula E car, an LMP2 car and then – most excitingly – an F1 car, when he did a couple of tests for Renault.

Things went well, although it didn’t end in a race seat with the team, Williams has been showing an awful lot of interest in him and we’re seriously hyped to hear whether he’s going to get the drive next year. 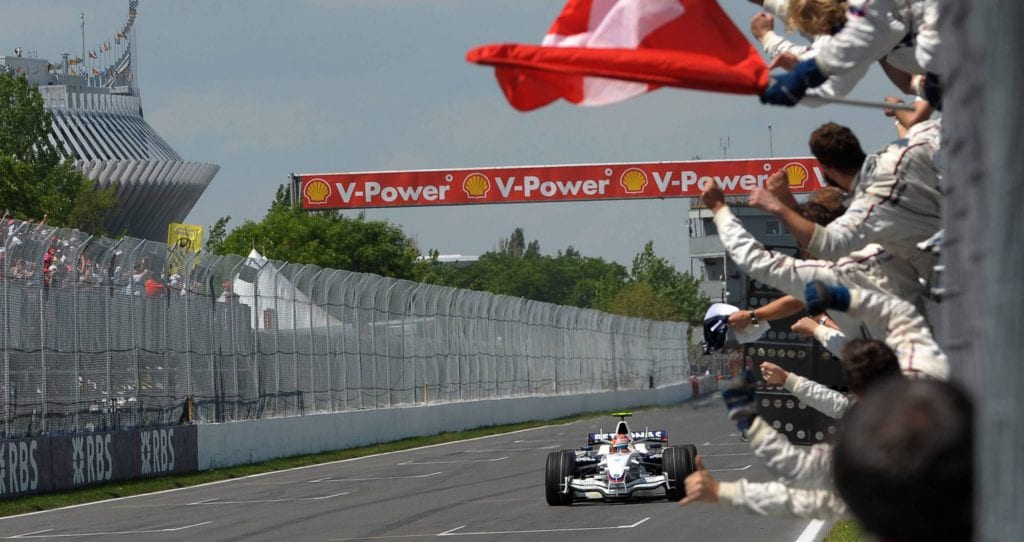