10 Of The Best Takuma Sato Moments

Takuma Sato didn’t get the motor racing bug until he was 19-years-old. Up until that point he’d wanted to become a cyclist, but after trying out a go-kart he decided to make the switch to four wheels. In 1997 he won a racing scholarship at Suzuka but passed up a fully-paid seat in Japanese F3 to head to Europe.

Now, 20 years later, Sato finds himself as the winner of the biggest race in the world, and along the way he’s provided plenty of classic moments. Here are 10 of the best.

Sato quickly worked his way through the junior formulae to end up in British Formula 3. By the end of 2000 he was proving himself as one of the quickest drivers, and at the end of the year his Honda backing led to a test with the Jordan team. In 2001 he did more F1 testing for the BAR team whilst continuing to compete in British F3.

He dominated the season, taking 12 wins from 26 races to win the title ahead of future team mate Anthony Davidson, and he also dominated the F3 Masters race at Zandvoort. The combination of his speed and Honda backing was enough to secure him a race seat at Jordan for 2002, but even so he wasn’t done winning yet.

At the end of the year he headed to Macau, arguably the most prestigious race on the ladder to F1, and guess what? Yup, he won that too. Little did he know it would be another 12 years before he’d win another major race.

Sato’s first year in Formula 1 was a difficult one. He showed flashes of speed but was also somewhat erratic, and he was lucky to walk away from a horrible accident in Austria when Nick Heidfeld’s Sauber speared into the side of his car.

Although teammate Giancarlo Fisichella did his usual trick of putting in some giant-killing drivers Sato wasn’t being completely destroyed by him. But heading into the last round of the season he hadn’t scored a single point, whereas Fisichella had seven.

The final round was Sato’s home race at Suzuka , and spurred on by his home crowd he put in a sensational lap in qualifying to start from seventh. He drove well in the race too, and by the time of the chequered flag he was up in fifth, scoring his first F1 points and equalling the teams best result of the season. Perhaps more impressive however was the fact that he was still on the same lap as Michael Schumacher’s winning Ferrari!

After a year out testing for BAR Sato was promoted to a full time race-seat for the team for 2004, alongside Jenson Button. At the start of the season it was Button who was getting all the results for the team but Sato frequently showed his speed.

In the first qualifying session for the European Grand Prix at the Nurburgring Sato laid down a blistering lap of 1:27.691, the fastest ever around the track. With F1 looking unlikely to return to the Nurburgring any time soon it looks like being a record that could stand for some time.

In qualifying itself Sato was second, the best ever by a Japanese driver, and in the race was fighting for a podium but a bit of classic Takuma over-exuberance left him without a front wing, and his engine popped soon afterwards.

If you could hope to sum up Sato’s F1 career in one single lap, then this would probably be it.

A monster first sector sees him looking like a threat for pole, but then he throws it away with some sick powerslides through the chicane. It should still be good enough for somewhere on the first few rows, but he takes ridiculous liberties with the kerbs at the final chicane and spins, somehow keeping his car out of the wall of champions.

It’s everything we love about him. Pure speed, excellent car control, and over-aggression. And despite the spin, his lap was still faster then Zsolt Baumgartner’s Minardi.

Sato finally managed to convert his speed into a podium at Indianapolis, despite the BAR team going with completely the wrong strategy. He started third and when the team decided not to pit it’s cars during the safety car (which had been deployed for Ralf Schumacher’s crash on the banking) it meant that Sato would emerge from his first stop way back in the midfield.

From then on though Sato went on a rampage and passed several cars, going from 11th to seventh in just five laps.

He continued with strong pace and caught up to those ahead, continuing to make ground after the second round of stops. On lap 61 Sato caught and passed third-placed Trulli and kept it together to take his first (and only) F1 podium. I suspect it’s no longer his happiest memory of Indianapolis though…

Sato was dropped from BAR after a bad season in 2005, but he kept a place in F1 for 2006 thanks to the newly formed Super Aguri team. With the team using four-year-old Arrows chassis it was a tough year for Sato, but things slowly improved and towards the end of the season the team were edging ahead of Midland.

In the last race at Interlagos Sato demonstrated his pace with the kind of performance we all love to see from a fast driver in a slow car. Although he only qualified 20th he managed to rise up to 10th by the finish, ahead of the likes of Red Bull and Toro Rosso.

Probably the most memorable moment of Sato’s F1 career came at the 2007 Canadian Grand Prix. That year’s Super Aguri was based on the 2006 Honda, so it wasn’t a bad car, as shown by his 10th place in qualifying for the first race in Australia and eight place in Barcelona to score the teams first point.

But the absolute high point came in Canada. In a crazy race Sato found himself on the right tyres at the end of the race and put moves on Ralf Schumacher and then Fernando Alonso to finish sixth, his best result since 2004 and Super Aguri’s best result ever.

Unfortunately for Takuma the team folded just a few races into 2008 and he was left without a drive. After losing out to Sebastien Bourdais for a Toro Rosso seat in 2009 he turned his attention to IndyCar.

Sato races by the philosophy of “no attack, no chance”, and he completely lived up to his words during the 2012 Indy 500. In the closing laps he emerged as something of a surprise challenger for victory, and going into the final lap he was in prime position to make a challenge for the lead.

Ideally he’d have waited for turns three and four to make his move, but that isn’t Satos way, and as soon as he saw a chance he went for it. He tried to go under Dario Franchitti in turn one and lost it, spinning out of the race. If there’s one thing you absolutely can’t criticise Sato for, it’s holding back!

Just as with his F1 career, Sato was frequently showing speed in IndyCar but not the results to back it up. Sure, there were a couple of podiums and pole positions, but there were also a fair few crashes and incidents. That all changed in 2013 however when he took his first major win since his Formula 3 days when he triumphed at Long Beach. He started fourth on the grid and at the first round of stops he took a lead he would never relinquish, becoming the first Japanese driver to win an IndyCar race.

As a bit of an aside, at the next race of the championship in Sao Paolo Sato once again found himself leading. This time he was under a bit more pressure however, and would play a part in one of the most exciting races in recent years.

All that pressure, all the effort of defending the lead only to lose it on the last corner, and he still applauds the winner on the slow down lap? Sheer class, Taku. Sheer class.

With all eyes on Fernando Alonso at the 2017 Indy 500 it was easy to overlook…well, everyone really. Sato was one of those who flew a bit under the radar all month, even though he qualified right up there in fourth.

He was a contender for much of the race too, and with five laps to go he took the lead from Helio Castroneves and in very un-Sato like fashion, he kept a cool head and held on to take an immensely popular win.

Seeing young drivers do well is always great, because it offers a glimpse into the future. Seeing the best-of-the-best do well is also great, because we all love to see those at the top of their game performing. But seeing Takuma Sato – who at 40-years-old is surely in the autumn of his career – win the biggest race in the world is just a little bit special. Especially as he did so not through luck, not through strategy, but because he was damn fast and on that day in history, he simply did a better job than anyone else.

Given his popularity, his love for racing and all his efforts over the past 15 years of top-level motorsport, I can think of no driver who deserves this success more. 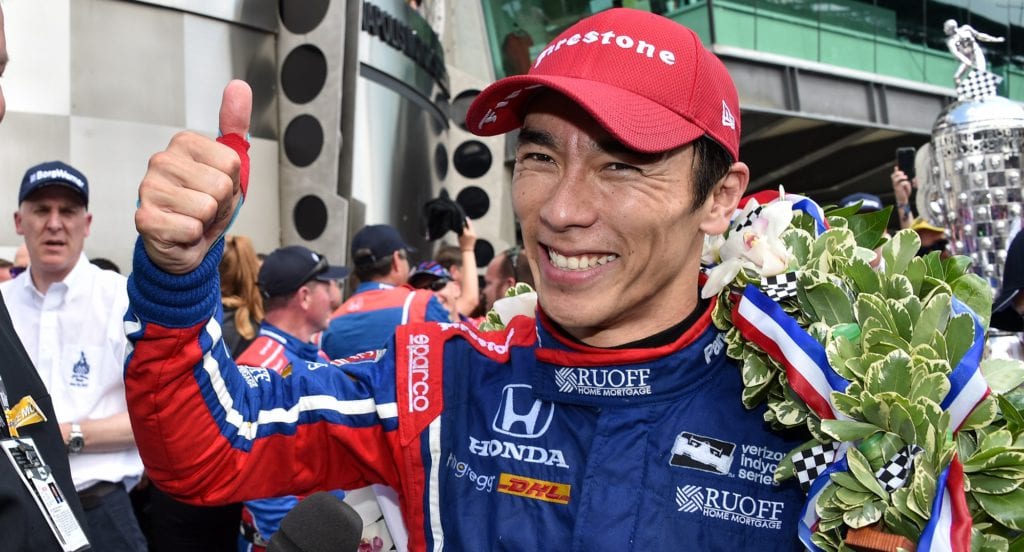