Is it just us, or have drivers and engineers been extra sassy over the radio this year? Not that we’re complaining, because they’ve given us some absolutely brilliant soundbites over the course of the season. Here are 10 of our favourites.

“I don’t need f***ing drinks! There is enough concentration to keep the car on the track!”

In a damp Chinese GP and with a Honda engine which was unbelievably awful, Fernando was doing everything he could to try and wring some kind of result out of it. Therefore he wasn’t overly happy when his engineer thoughtfully reminded him to have a drink.

When Jenson Button said he was going to keep Alonso’s McLaren seat warm, we didn’t know he meant like this! Despite being over in Indianapolis, Fernando patched in to wish Button luck for Monaco, giving us this absolutely brilliant conversation.

During the red flag period in Baku, Kimi Raikkonen wanted something. We’re not quite sure exactly what it was he wanted, but he seemed pretty agitated to get it judging by his tone over team radio.

“What the f**k is this Williams doing? If he can’t see me behind him then he should stick to the reporting”

On most F1 weekends Paul di Resta wields a microphone for Sky Sports F1, but when Felipe Massa was taken ill in Hungary he donned his helmet as a stand-in at Williams. During the race Kimi came up to lap him and, unhappy at being held up, delivered this savage line.

During his charge through the field at Monza, Daniel Ricciardo came out with this hilarious (if slightly creepy) response when told that the next driver he was due to pass was all on their own.

Fernando was seriously annoyed when Jolyon Palmer passed him by cutting a chicane and didn’t feel the five-second penalty handed out was harsh enough. When he later found out that Jolyon had retired there was no sympathy whatsoever from the McLaren driver.

“What an idiot, haha. Hulkenberg was right!”

Nico Hulkenberg was less than happy with Kevin Magnussen in the Hungarian GP and called him “the most unsporting driver”, which lead to the infamous “suck my balls” retort from K-Mag.

In Malaysia, Alonso got a taste of what Nico was on about when he battled past the Haas driver and wasted no time in agreeing with him.

Romain Grosjean has developed a reputation for moaning about everything (he even ran a special helmet at COTA joking about it) but he more than lived up to it at the end of the race. He was complaining to his engineer that one of his tyres was so worn he should retire the car, but his team principal was so fed up of his moaning he interrupted and simply told him to shut up.

Vettel’s pole lap in Mexico was pretty epic but his celebration was downright weird. Unsurprisingly it was almost instantly subjected to the remix treatment across the internet.

“Daddy I’m so proud of you, I will support you wherever you go. I love you. By the way I loved your start!”

Felipe Massa’s second final home race was much better in terms of result than it had been in 2016, but it wasn’t quite as emotional. Well, that was until his son came on the radio after the race. I’m not crying, you’re crying! 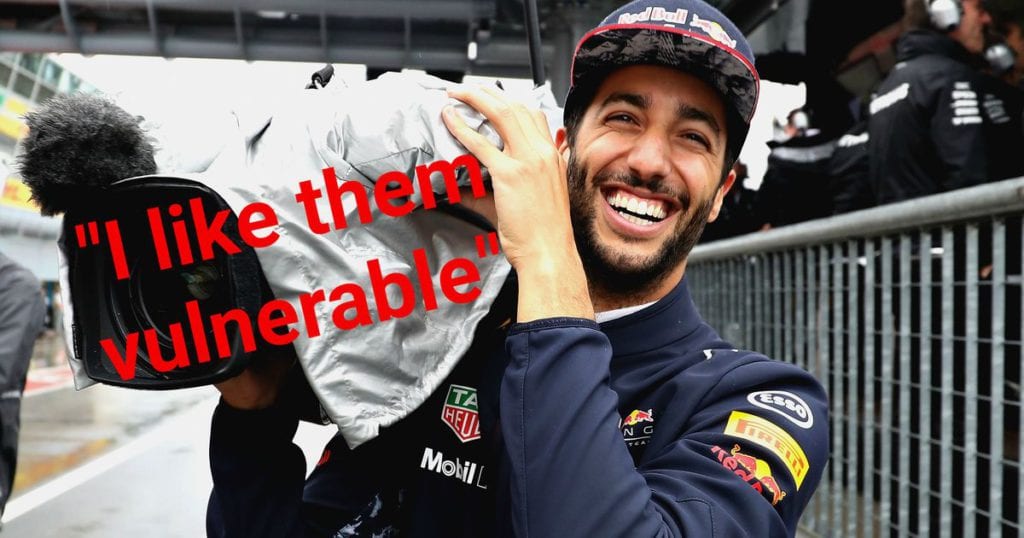