10 Of The Most Inspirational Women In F1’s History – WTF1
Skip to content
×
Feature , Formula 1 , Opinion
4 comments

10 Of The Most Inspirational Women In F1’s History

It’s well documented that motorsport is considered ‘male-dominated’. As it stands, on this 2021 International Women’s Day, all the drivers in F1 are male, the same for the team principals and a great deal of the workforces within the teams.

Things are changing, though, with more and more female talent making their way into the sport year on year. Ever since the idea of motor racing was founded, incredible and empowering women have always been there and always will be.

In this feature, we take a closer look at just a handful of wonderful women who have had serious influence in the F1 we all know and love today.

Also known as ‘Ginny’, Lady Virginia Williams was a huge part of the success of the Williams F1 Team. Married to Frank Williams, she helped guide the team and made several sacrifices to help the team succeed – including selling her flat!

Thanks to her passion, understanding and dedication, the team became one of the best in F1 history. Ginny also became the first woman on a post-race F1 podium, collecting the team’s silverware at the British Grand Prix in 1986.

Having graduated from the University of Cambridge Department of Engineering, Ruth went to work with Ferrari before joining Haas as their strategy engineer. She later joined Sauber Motorsport AG, and as a result, is the Head of Race Strategy at the Alfa Romeo team.

Making the important calls from the pit wall, her work has helped the Sauber and Alfa Romeo teams secure a wealth of top ten finishes over the last few seasons.

In 1958, Maria Terese de Filippis became the first woman to compete in an F1 Grand Prix. Over her short F1 career, she participated in five World Championship events and raced alongside Graham Hill, Mike Hawthorn and Jack Brabham, to name a few.

Speaking in 2006, de Filippis said that five-time F1 world champion Juan Manuel Fangio once told her, “you go too fast, you take too many risks”.

Daughter of Virginia and Frank Williams, Claire inherited the enthusiasm and passion for motorsport that both her parents held. Having graduated from university, Claire went on to be a press officer for the Silverstone circuit before making her way up to the Deputy Team Principal of the Williams F1 team.

One of F1’s first press officers, Ann Bradshaw is one of the most experienced and respected people in the paddock. Not only is she often regarded as the inspiration for many press officers in the industry, but she has also been a hugely influential personality in the F1 world since 1985.

Working with drivers like Nelson Piquet, Nigel Mansell, Damon Hill, Ann is hailed as the best around in her media role.

Working at Mercedes as their Trackside Fluid Engineer, Stephanie made history at the 2020 Styrian Grand Prix, becoming the first black woman on an F1 podium. Encouraging women to work in Science, Technology, Engineering and Maths (STEM) careers is something Mercedes has been actively trying to achieve.

Earlier today, Mercedes announced a new four-month mentoring programme for young women from ethnic minority and low socio-economic backgrounds to match with experienced Mercedes F1 engineers to guide them towards a STEM career.

One of just five women to have competed in F1, Desiré Wilson is the only woman to have won an F1 race of any kind when she took victory in the British Aurora F1 Championship in 1980. Held at Brands Hatch, Wilson now has a grandstand at the circuit named after her.

Susie Wolff became the first woman in 22 years to participate in an F1 weekend when she drove during FP1 for Williams at the 2014 British Grand Prix. Wolff was already the development driver for Williams, a role she had been in since the 2012 season, and retired from F1 and her role at Williams at the end of 2015.

Overall, Wolff competed in four FP1 sessions for Williams. After her racing career came to an end, she helped found the non-profit organisation Dare to be Different, now known as FIA’s Girls on Track, to inspire young women into motorsport. Susie is also a respected and successful team principal in Formula E.

Michelle is a Race Team Composite Technician for Aston Martin in F1 and previously worked with the team when they were Racing Point. Frequently seen on television broadcasts in the garage, she works with the team on their composite materials such as carbon fibre.

An F1 pit lane reporter, Natalie Pinkham is a well-established presenter and Sky Sports team member. Originally working with BBC Radio 5 Live for the 2011 season, Pinkham jumped to Sky, where she has remained ever since. In 2020 she became the first-ever female anchor of Sky’s F1 coverage.

This list could be endless, with so many exceptional women working in F1 over its 70-year history. Do you have a particular favourite or someone who inspires you? 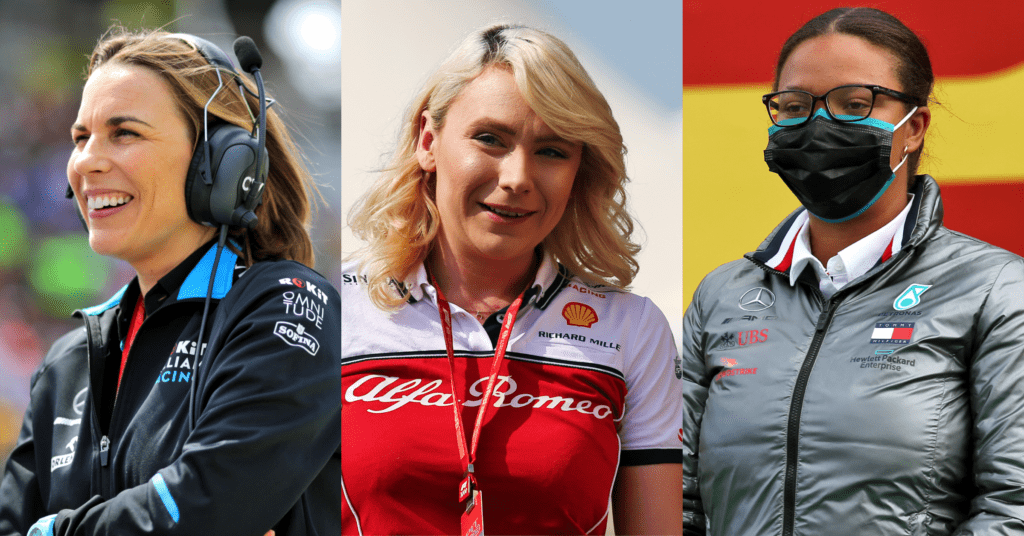