We’ve already seen the times when great teams built unexpectedly bad cars, but what about the other way around? It does happen. Sometimes teams you’d traditionally expect to see in the middle or at the back of the grid can come up with a seriously competitive car, seemingly out of nowhere, only to drop back down the order in years afterwards.

March had a fairly low-key time in F1 in the 1970s, and again briefly in the early 1980s. After success in America, the company returned for a third F1 stint in 1987. Results were initially pretty meh and it looked like March was going to continue to just make up the numbers. But the team’s 1988 car, the 881, was an absolute gem. Why? Two words: Adrian Newey.

It was his first F1 car design. Once the kinks had been ironed out the 881 started to put in some serious performances, particularly in the hands of Ivan Capelli. He was on the podium at Spa and in Portugal raised eyebrows when he qualified third, finished second and spent much of the race putting pressure on eventual winner Alain Prost.

Then, at Suzuka, the 881 became the first naturally-aspirated car to lead a lap of a race in five years when Capelli briefly got ahead of Prost.

Even though Newey designed cars for the team (then known as Leyton House) for the next two seasons, they never managed to work as consistently well as the 881 had.

BAR made all sorts of ridiculous promises when it first entered F1 in 1999, like saying that it would win on debut. Unsurprisingly BARs own hype backfired and the team remained stuck in the midfield for years, ruining Jacques Villeneuve’s career in the process.

In 2004, all that changed as the 006 was an enormous improvement. There were no wins, but with a dominant Ferrari taking 15 victories from 18 races there’s no shame in that!

Jenson Button came close a couple of times though, eventually taking 10 podiums and a pole position on his way to a comfortable third in the championship. Teammate Takuma Sato also had a number of strong drives and the team ended the season second in the constructors’ title.

BAR was finally the team it had claimed it would be in its first season, but it couldn’t carry on the momentum. It slipped back to sixth in the constructors’ in 2005, not helped by a race ban for an illegal fuel tank, and the team was completely taken over by Honda for 2006.

Ligier was a decent F1 team in the late 1970s and early 1980s, before slowly slipping back into the midfield. Things continued to get worse – between 1987 and 1991 the team only scored five points and endured three seasons without scoring at all – not great for a team that had once challenged for championships. At times, simply qualifying for races was a challenge.

Things improved slightly in 1992, and then in 1993 things improved rather a lot. With Mark Blundell and Martin Brundle driving, Ligier scored 23 points and took fifth in the constructors’ championship, just a few points behind Ferrari, and was also on the podium three times.

As the junior Red Bull team, not much was expected from Toro Rosso when the team took over from Minardi for the 2006 season. After scoring just a single point that year, 2007 threatened to be entirely pointless until Sebastian Vettel and Tonio Liuzzi finished fourth and sixth in a wet/dry Chinese GP.

There wasn’t much happening in 2008 either – well at least until the team introduced the Adrian Newey-designed STR3. It was basically the same car as the Red Bull RB4 except that, embarrassingly, Toro Rosso did much better with it. Vettel became a regular points scorer and took an utterly dominant victory at Monza.

It was the only time Toro Rosso beat Red Bull in the championship, a feat made more difficult since because Red Bull has become a top team and also because the practice of customer cars was banned at the end of 2009, putting an end to Toro Rosso’s ‘shortcut’ to getting a decent car.

You couldn’t help but love Minardi. For more than 20 years the team struggled along at the back and on the rare occasion a Minardi driver scored points it was like they’d just won the championship. Every now and then, however, Minardi would build a car that would thrust the team from backmarkers to the dizzy heights of the lower midfield.

Perhaps the best of those cars was the M189. Designed by Aldo Costa (the guy behind Mercedes’ dominant cars of recent years) the team introduced it a few races into 1989 and once it actually started finishing races, it finished them well. Pierluigi Martini scored points with it on three separate occasions, with Luiz Perez-Sala also scoring a point at the British GP, giving Minardi it’s only ‘real’ double-points finish.

That wasn’t the only reason the M189 was a memorable car for Minardi. At the Portuguese GP that year Martini led a single lap – the only time Minardi ever did so – and when the car was used at the start of 1990, Martini managed to plonk it on the front row at Phoenix for the team’s best ever grid slot. A few hundredths quicker and he’d have been on pole!

If there was an award for the most disappointing team in F1 history Toyota would be a strong candidate for winning it. It had all the money, all the resources and some pretty decent drivers, yet in eight seasons didn’t manage a single win. From 2002-2004 just scoring points was an achievement, but in 2005 Toyota had built what was probably the second fastest car in the first part of the season.

The TF105 was a pretty handy machine and Jarno Trulli took a brace of podiums in the first few races, proving to unexpectedly appear to be Fernando Alonso’s closest challenger in the championship until McLaren and Kimi Raikkonen came good.

Trulli’s form tailed off but Ralf Schumacher went on a points-scoring binge, and it would probably have been enough to nab the team third in the constructors’ championship had Ferrari not come away with a free 1-2 in the mess of the 2005 US GP.

After 2005, Toyota went back to its role as occasional points scorers and though a brief resurgence in 2009 saw better results, the team was gone at the end of the year.

Osella competed in F1 from 1980 to 1990 and never managed to qualify for every race in a single season. It’s not exactly a great record – the closest it came to making every race was in 1984, which saw just one DNQ in what was probably Osella’s most competitive season (though I use the term ‘competitive’ loosely).

The car was loosely based on the Alfa Romeo 183T from the previous year and as a result wasn’t entirely terrible. Piercarlo Ghinzani used it to finish fifth at Dallas – the only points he scored in his entire 111-race career. Teammate Jo Gartner also managed a fifth place in the team’s home race at Monza, but because he wasn’t nominated to score points, neither he or the team got any.

Osella continued to update the FA1F throughout the years but unsurprisingly, it didn’t do the team much good. There would be no more points scored, plenty more failures to qualify (and pre-qualify!) before morphing into Fondmetal for two years and eventually folding.

Of course, Tyrrell wasn’t a bad team – it had won championships and been regular race winners for much of the 1970s. But during the turbo era it plummeted down the order and never really recovered until the team was taken over by BAR in 1998.

The 019 of 1990 was an absolute peach of a car, though. It was the first F1 car to feature a high nose, a design feature that became universal within just a few years. As well as seriously efficient aerodynamics it also had a great chassis and a young Jean Alesi was a regular feature in the top 10, be it in qualifying or the race. The high point came at Monaco, when Alesi started third and finished a very close second to Ayrton Senna.

Had he not made so many errors he could have racked up a serious points tally by the end of the year, but as it was the team only scored the same number of points as it did in 1989. Tyrrell picked up a few more solid results in subsequent seasons, but the cars weren’t as consistently competitive or as revolutionary as the 019 had a been. It was a final throw of the dice from the once-great team.

Jordan often punched above its weight and in the late 1990s, it wasn’t an uncommon sight to see one of the glorious yellow cars on the podium.

In 1999 however, Jordan found itself as something of a surprise championship challenger. As Mika Hakkinen did his best to throw away the title and Ferrari had to put all its eggs in Eddie Irvine’s basket, Frentzen consistently racked up the results, scoring a couple of terrific wins in France and Italy. Damon Hill wasn’t having such a great time and only scored seven points all year, but the Jordan 199 was a terrific car that marked the high point of the teams time in F1.

Ferrari and McLaren were too strong in the end and Frentzen and Jordan had to settle for third in both championships, but it was still a mighty effort.

Legendary chassis builders Lola paired up with a variety of F1 teams throughout its history but never really made an impact. By far its longest association came with the Larrousse team, who it designed cars for between 1987 and 1991.

Results were unremarkable, but in 1990 came the team’s purple patch. The Lamborghini V12-powered LC 90 not only looked stunning, but was also very fast. Aguri Suzuki and Eric Bernard scored 11 points throughout the season giving Larrousse its best constructors’ championship finish of sixth. Or at least, it would have done – Larrousse had told the FIA that it was the constructor, but because the cars had actually been built by Lola the team was disqualified from the championship, though it kept all of its points and results.

And what results they were too. The British GP was a great weekend for the team, with Bernard and Suzuki qualifying eighth and ninth and going on to finish fourth and sixth. The high point came in Japan though, with Suzuki taking a remarkable third place at his home circuit.

That was as good as it got for Lola, though. A year with Scuderia Italia in 1993 was very poor, and then there’s the nightmare of the Mastercard Lola team of 1997…. 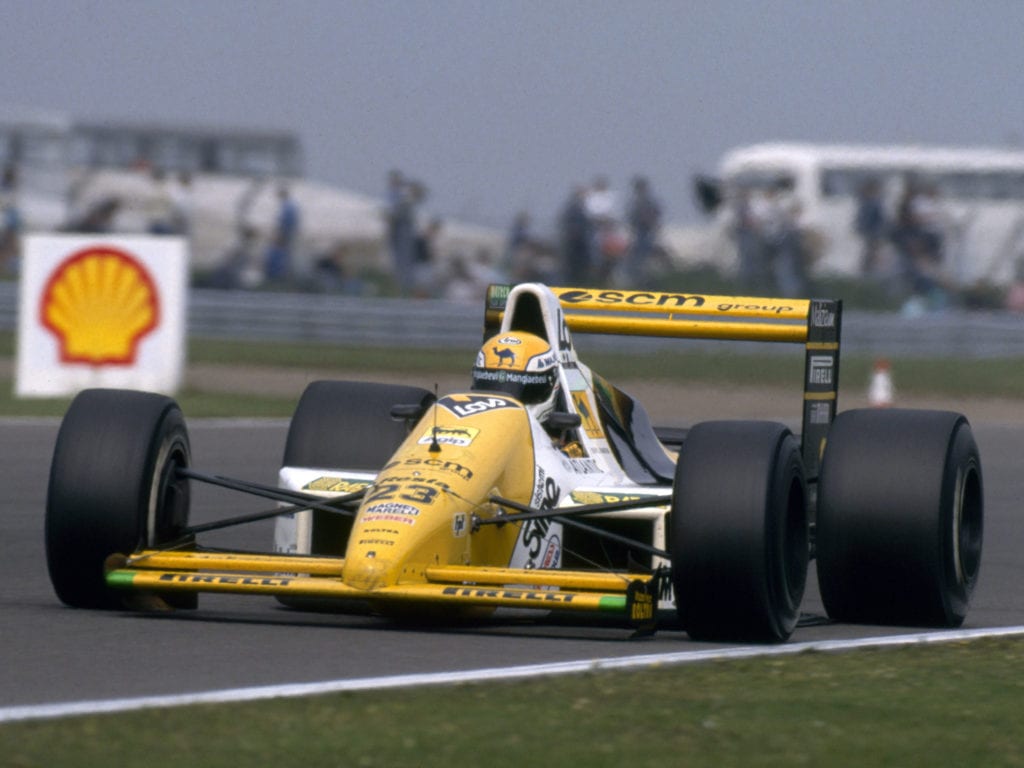