It’s Halloween today, so it’s time for a tenuously-themed article with a which links into the frightening festivities.

This year we’ve picked out some F1 cars which are a little bit scary because they’re so utterly disgusting to look at. If you’re of a nervous disposition, please, avert your eyes now.

Earth dreams? More like earth nightmares. The RA107 was bad enough, but 2008’s RA108 somehow had an even more disgusting livery. It was also the year when F1 designers crammed on as many winglets and aerodynamic devices as possible, even on the wheels. That made the cars particularly hideous, and the Honda was the worst of the lot.

No, that’s not an early version of the Halo, it’s a mirror. The 1970s was full of weird and wonderful creations as the Cosworth DFV powerplant pretty much allowed pretty much anyone with a pencil, a few mates and a bit of money in their pocket to have a go at making their own F1 car. One of those was caravan manufacturer Günther Hennerici, who hired Italian designer Luigi Colani to make some swoopy aerodynamic bodywork for the March 721 he’d bought. Not only did it look kinda hideous but it was also worse than the car it was based on.

Trojan was another brief entrant in F1 in the 1970s with this, the Trojan T103. Just look at all those angles! And the airbox placed crudely on top of the engine. It’s like it’s made of Lego – and not even something from an actual kit. Imagine stepping on this barefoot in the dark…

Oh yes, it’s the walrus nose Williams. Looking back now it actually seems kinda cool but at the time it was really rather shocking to see such a radical nose design. It certainly looked pretty mean (especially with Juan Pablo Montoya at the wheel) but it didn’t really work and the team reverted to a more normal nose at the end of the year.

The 2014 regulations results in a whole range of long, thin, phallic noses, and even an unusual asymmetric two-pronged design from Lotus. However, backmarkers Caterham went all-out for weirdness with this solution. It looked like the front of the car had accidentally been made too short, so the nosecone from a late-1980s Eurobrun had been glued onto the front in order to make it long enough. What’s really scary is that Marcus Ericsson made his debut in this car – yes, he really has been around for that long…

1995 had some seriously good-looking cars. The McLaren MP4/10 was not one of them. Featuring a weird engine cover/shark fin/central wing combo, it also had a tall, narrow nose and a cockpit so small that it had to be rebuilt just so Nigel Mansell could fit inside it. Big, burly Nige trying to extricate himself from a car that’s too small… now there’s an image for you!

The Ferrari 312T4 that won both championships in 1979 wasn’t exactly a looker, but 1980’s 312T5 was somehow even worse. That front wing plonked on top of the nose, way out in front of the rest of the car is just incredibly ungainly. The performance was appalling, too, which meant Gilles Villeneuve had to drive even more aggressively than usual to get any sort of result out of it – and his driving was already scary enough…

This was known the ‘lobster claw’ Brabham because… well, you can probably see why. The front wing-mounted radiators look like they used to be mounted on the sidepods, but accidentally slid forwards and got stuck on the front wing.

Oh yeah, and the wing itself looks like it’s being eaten by the shark-shaped monocoque. And apart from lots of other things, what’s scarier than a shark?

There’s nothing wrong with the looks of the F2004 – quite the opposite in fact. No, the reason it’s so scary is that it reminds everyone unlucky enough to be F1 fans at the time just what a boring season it was. Seriously, who wants to see the same driver win 12 of the first 13 races? It made the championship a foregone conclusion pretty much from race one and to this day, we live in fear of something similar happening again. 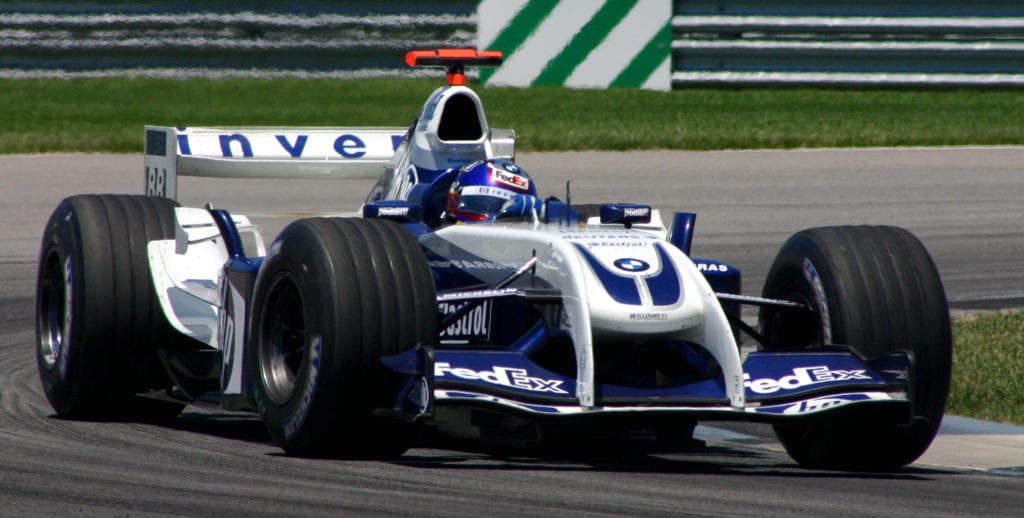