F1 was back to its best in Shanghai, with a race that had it all – changeable conditions, great overtakes, feisty battles, crashes, clashes and a back-of-the-grid-to-podium drive.

Yep, Australia was underwhelming and there were concerns about overtaking, but they were all proved wrong in China with a great race.

It really was a thriller, especially the first half, and there were plenty of quirky, dramatic and exciting moments as Lewis Hamilton took victory. Let’s take a look back at them…

Sebastian Vettel was weirdly out of position at the start of the Chinese GP, for some reason, but it went ahead regardless. All drivers were on intermediates apart from Carlos Sainz Jr. who gambled on super-softs. Plenty of spray was kicked up and there were some big winners from the first lap…

The driver who gained the most places on lap one was Max Verstappen. Somehow, he went from 16th to seventh in the space of 16 corners. In wet conditions too, with drivers sliding around and spinning off. Amazing. Just, amazing.

Williams rookie Lance Stroll’s race didn’t last long. He was forced to walk away from his car on the opening lap after a clash with Sergio Perez damaged his car and spun him off into the Turn 10 gravel. Oops…

Stroll’s beached Williams brought out the virtual safety car but when that ended, the full safety car was deployed because of a heavily damaged Sauber on the front straight. Antonio Giovinazzi shunted hard at the last corner in qualifying and he crashed at almost the same place again.

He lost the rear on the wet part of the track just by the finish line and smashed into the pit wall. It was a massive impact but he’s OK, which is the main thing. But it’s been an expensive weekend for Sauber…

Drivers pitted for dry tyres under the safety car but that meant drivers struggled for tyre temperature. Valtteri Bottas perhaps tried too hard warming them up and spun, falling to 12th. An awkward error, that’s for sure.

How amazing was Verstappen all race? By lap 11 he was up to second with some great passes, mainly into the Turn 6 hairpin. Go Max!

Vettel took the fight to Daniel Ricciardo for third and disposed of the Red Bull in the finest style possible – a wheel-banging move around the outside of Turn 6. Glorious.

Stoffel Vandoorne retired from the race relatively early on with a fuel problem and Fernando Alonso had to pull off after the half-way mark with a driveshaft issue. He was running in the top 10 too, so it was the second race in a row he ‘DNFed’ while on course for points.

Mercedes accidentally called Bottas ‘Nico’ over team radio in the closing stages, which probably didn’t help his mood after a disappointing race.

Things calmed down in the final laps, except for the battle for third between Verstappen and Ricciardo. The team-mates were allowed to race (yay) and it was a close scrap but Verstappen held onto the podium.

Hamilton crossed the line in first place to win his fifth Chinese GP, secure the 54th victory of his career and draw level on points with Vettel in the championship. Vettel was P2, Verstappen P3 and Ricciardo P4, ahead of Raikkonen and Bottas. 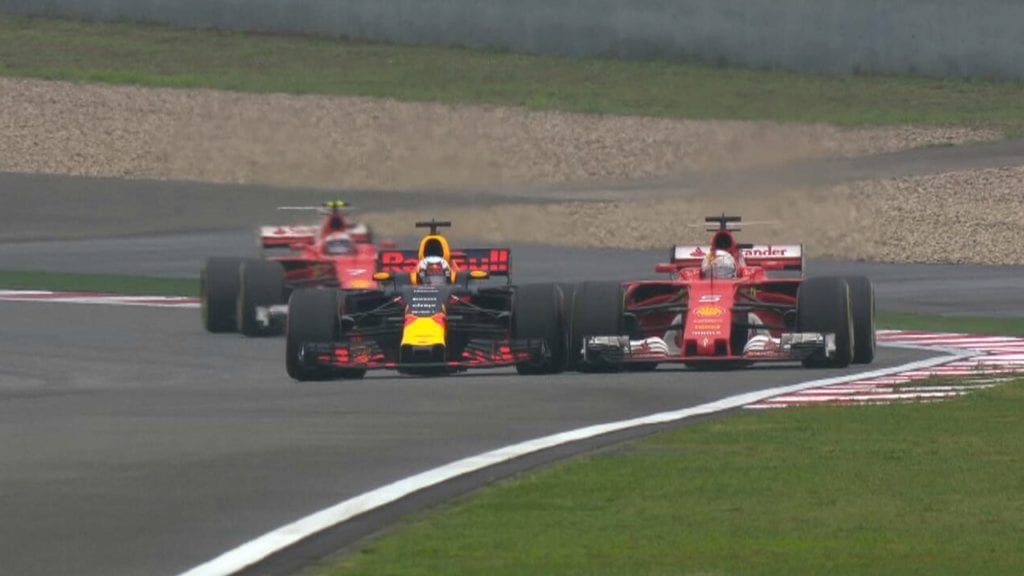