The completely bizarre crash between Sebastian Vettel and Lance Stroll on the slowing down lap of the Malaysian Grand Prix is the sort of thing that doesn’t happen often. And when Vettel caught a lift back on the sidepod of Pascal Wehrlein’s Sauber, it meant we got to enjoy another thing which doesn’t happen often – the F1 taxi ride.

After all, when drivers stop out on the track towards the end of the race or after the chequered flag has fallen, why would they walk back to the paddock or endure a wild ride on the back of a marshal’s moped? The track is literally populated with some of the best drivers in the world – why not catch a ride with one of them?!

It’s created some iconic moments over the years as rivals, teammates and pals have all shared a car. Here are just 12 examples.

As Nigel Mansell took yet another crushing victory on home turf, Ayrton Senna’s McLaren ran out of fuel on the final lap. But instead of making him take the long way back, Mansell stopped to give his title rival a lift back.

Marshals tried to pull Senna from the car but he wasn’t having any of it, and the two made their way back to the pits together, giving us one of the most iconic motorsport images of all time in the process.

Gerhard Berger was an absolute beast at Hockenheim, and in 1996 he was looking set to win until the Renault engine in his Benetton cruelly blew up with just three laps to go.

Now getting left way out in the woods of the old Hockenheimring layout isn’t exactly ideal, especially when you’ve just seen a win slip away, but thankfully teammate Jean Alesi was on hand to give Berger a ride back.

Another guy to put the ‘mate’ in teammate was David Coulthard after the 2001 Spanish Grand Prix. Mika Hakkinen had suffered a fate even more cruel than Berger’s when his engine popped on the very last lap whilst leading, so DC stopped and gave him a lift back.

Lewis Hamilton won a thrilling German Grand Prix at the Nurburgring in 2011 after a race-long battle with Fernando Alonso and Mark Webber. On the slowing down lap Fernando’s Ferrari stopped, and Webber being the total dude he is kindly gave him a ride back to the pits on his sidepod.

At the Singapore GP a couple of years later, Fernando got his chance to return the favour, thanks to Webber’s car failing just before the end of the race.

Unfortunately this time the stewards didn’t see the funny side. Alonso was reprimanded for stopping in an unsafe place, and Webber was reprimanded for entering the track without permission. For Mark, it was his third reprimand of the season, resulting in a 10-place grid drop for the next race in Korea. Maybe that was Fernando’s tactic all along…

Fresh from his first F1 victory, Rene Arnoux’s Renault ran out of fuel on the slowing down lap at Interlagos in 1980. Luckily for him, Riccardo Patrese was around to offer his Arrows as taxi service to the podium.

Another driver who needed a lift after winning his first race was Jean Alesi. The luckless Frenchman finally had things go his way for once on the way to what was his only F1 win, but his Ferrari ground to a halt on the slowdown lap.

Michael Schumacher had been on course to win the race before he dropped back with a gearbox issue, but he felt no malice towards the guy who’d inherited his win and gave him a ride back. It was also Alesi’s 31st birthday – he’d had quite the eventful day!

Loads of people were running out of fuel towards the end of the 1986 German Grand Prix, as the combination of the long straights and tight fuel limits took its toll on fuel consumption. Whilst Nelson Piquet and Ayrton Senna made it to the end (just!), Alain Prost stopped in sight of the finish line.

Teammate Keke Rosberg also ran out on the last lap but he was far too cool to bother with such trivial things as walking, so he grabbed a lift back with race-winner Piquet instead.

Is this the coolest F1 taxi of all time? Well, obviously, yes.

After the 1986 Mexican GP Stefan Johansson and Rene Arnoux tried to get a lift back on Philippe Alliot’s Ligier. But when that ran out of fuel, Johansson, Arnoux and Alliot all decamped onto Nelson Piquet’s passing Williams, making it four drivers in/on one F1 car.

Yup, it’s Hockenheim again! Giancarlo Fisichella could have won the 1997 race before a puncture spoiled his chances. Then a few laps from home his car broke down, leaving him stranded somewhere out at the back of the circuit.

Luckily for him though he didn’t have to trudge back through the woods as Schumacher picked him up, and a helmetless Fisi rode back astride the engine cover, hair blowing in the wind.

Until 2009 this was the closest he got to a Ferrari stint but even if you include that nightmare stint at the end of that year, this was still probably the fastest he ever went in a red F1 car…

The sole F1 race around the streets of Dallas was a real test of endurance for the drivers as temperatures soared and the crumbling surface tested concentration to the max.

Jacques Laffite was one of just seven cars still running at the finish. Crossing the line didn’t mean his work was done, however, as he decided to pick up the stranded McLaren drivers of Niki Lauda and Alain Prost (who’d retired sometime earlier) and fans were treated to the awesome sight of the three of them bombing back to the pits without their helmets on.

Usually F1 taxi lifts involve drivers sitting on the sidepods or the airbox, but where do you sit if the car doesn’t have sidepods, and perching on the airbox would just be…painful?

The rear wing of course! At least, that’s where Ronnie Peterson plonked his bottom when Carlos Pace gave him a ride on his Williams-March at some point during the 1972 French GP weekend. 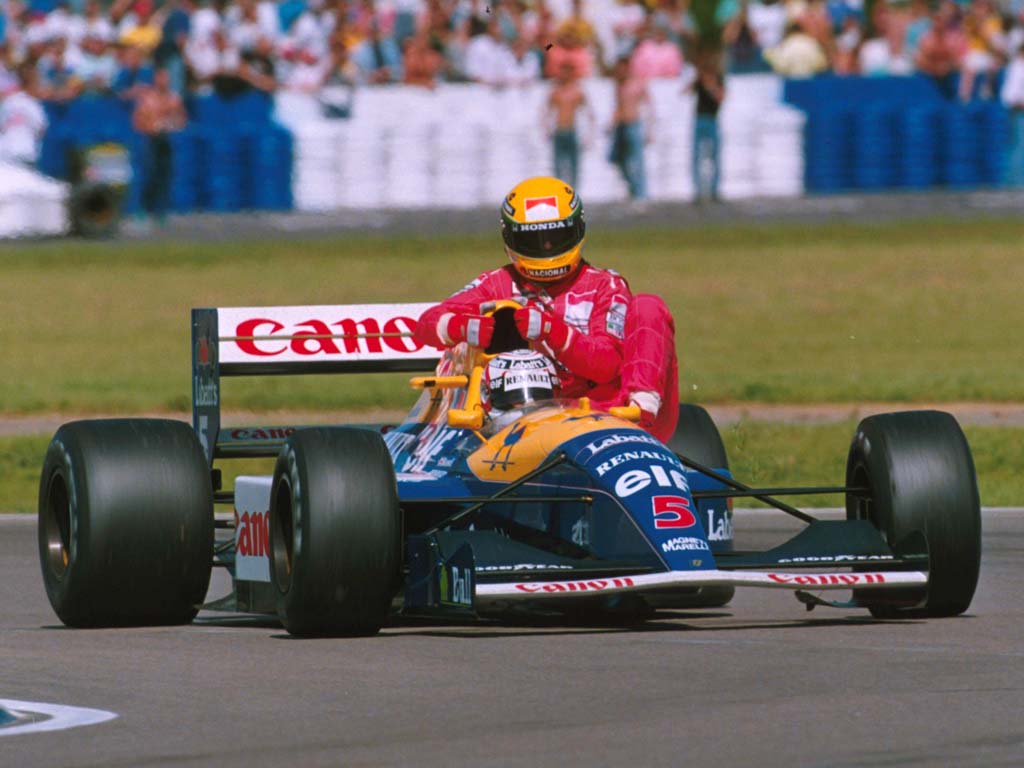