12 Dramatic Moments From The 2017 Australian GP

F1 delivered a fascinating first race of the sport’s new era at Melbourne’s Albert Park track. It wasn’t the most dramatic or action-packed race we’ve seen, but it still featured plenty of memorable moments.

It did, however, deliver a surprise winner. Lewis Hmilton took pole position on Saturday and many expected him to scamper off into the distance, but it was Sebastian Vettel who eventually won (disproving Max Verstappen’s pre-race theory).

Let’s reflect on the major moments and most exciting action from the Oz GP:

This TV graphic had us all a little confused for a moment. Had the Sauber suddenly got three times bigger and stopped on the circuit? Ah, no… just a graphic.

Daniel Ricciardo probably wasn’t smiling under his helmet after this moment… an electrical and sensor issue sticking his car in gear on his way to the grid. Red Bull got him out eventually but he was two laps down.

The new season got off to a… delayed start after a few issues (Sergio Perez apparently lining up wrong, the light by Daniil Kvyat’s car going off for some reason). Lights out was aborted and another formation lap took place. A bit confusing.

F1’s back! How good does that feel? The start is always a tense time but Hamilton stormed clear, as Vettel held off Valtteri Bottas.

The first on-track collision of the 2017 season came thanks to Kevin Magnussen clanging into the side of Marcus Ericsson’s Sauber on lap one at Turn 3. Oops…

Hamilton’s early lead caused him to join Michael Schumacher in the record books. They’re now the only two F1 drivers in history to lead over 3000 laps in their careers. Impressive!

How awesome was Romain Grosjean’s qualifying performance? He started sixth and spent the first part of the race well inside the top 10 but smoke pouring out of his car signalled his retirement on lap 15. K-Mag retired late on too, making it a double Haas DNF.

Hamilton only had a slim lead over Vettel when he pitted to go from ultra-softs to softs on lap 18. But he got caught in traffic and Vettel stayed out until lap 24. The overcut worked and there was a new race leader, and the car was red!

Perez and Carlos Sainz Jr’s battle for P8 got feisty with the mid-point approaching. The pink Force India dived around the outside with the help of DRS but not before chopping across Sainz’s front wing.

Dany Ric then retired just a few laps after the half-way mark with an engine failure. A truly woeful and heartbreaking end to his home event. He joined Grosjean, Jolyon Palmer and Ericsson on the sidelines.

Who says you can’t overtake with these new F1 cars? Fernando Alonso held P10 for most of the race but he lost two places in one straight when Esteban Ocon and Hulkenberg attacked – things got VERY close!

Ferrari returned to the top step of the podium for the first time since Singapore 2015 with Vettel getting the team’s season off to the best start possible. The fans poured onto the circuit as the cars recovered to the pits, with Vettel victorious by 10 seconds from Hamilton and Bottas – a solid performance on his Mercedes debut. 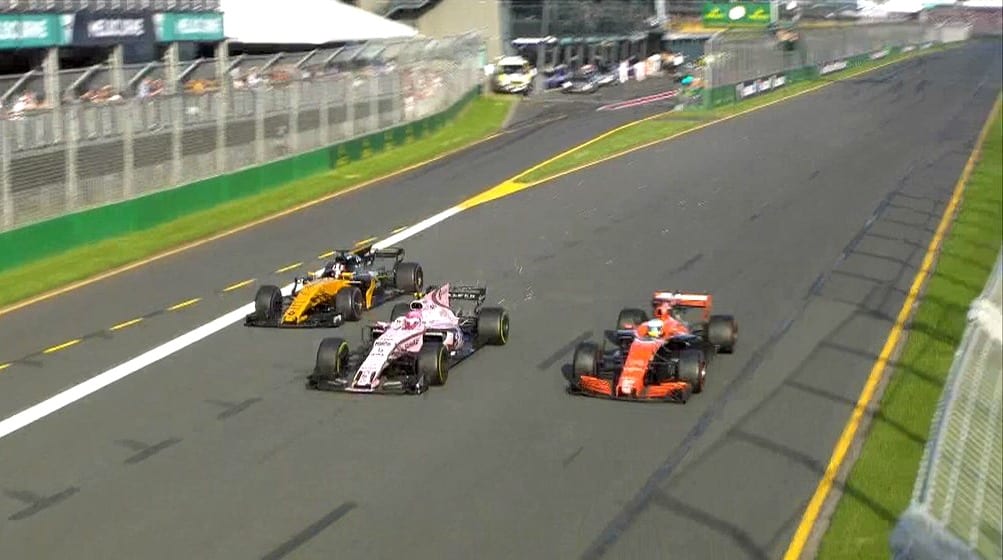