It isn’t exactly going Alonso’s way in F1 at the moment, with McLaren and Honda’s struggles continuing. Plus, he was on the pace at the Indianapolis 500 before retiring with – you guessed it – a failing Honda engine.

But, while he’s not quite achieving the same success as his early F1 career, he’s definitely keeping his spirits up. His sense of humour still remains, so with the 29 July 2017 marking his 36th birthday, we thought it’s the right time to take a look at his funniest F1 moments.

Who can forget the HUGE #PlacesAlonsoWouldRatherBe meme that was sparked from Alonso’s car breaking down during 2015 Brazilian GP qualifying.

With nothing else to really do, Alonso managed to find a deck chair at the side of the track, and then sat in it, majestically letting the wind flow through his hair as he watched the session.

He even gave us this now iconic cheeky wink.

The 2015 season was a very good one for radio messages, largely thanks to a very frustrated Alonso. During a frustrating Japanese GP where the Spaniard was down on power, he uttered these famous words:

Following on from the deckchair moment at the Brazilian GP in ’15, Alonso and his then team-mate Jenson Button decided to gate-crash the podium. It’d been a while since both had been up there…

Another hilarious radio message from 2015, this time the Italian GP. He was told Romain Grosjean was on old tyres and he could possibly catch him.

He just laughed. He knew it wasn’t possible.

Alonso basically broke the internet for a second time when his car ground to a halt during Brazilian GP second practice in 2016, and he went on the hunt for another deckchair.

During this second #PlacesAlonsoWouldRatherBe episode, Alonso managed to get his hands on a TV camera and gave it a go. Sure, it wasn’t the smoothest shot, but he tried it out. And it was hilarious to watch.

The 2005 and 2006 F1 champion is without doubt the meme king of F1 and this one from five-a-side football match before the 2016 Italian GP sparked some brilliant edits.

Ex-F1 driver and always-controversial Sky pundit Johnny Herbert said early in the 2016 season that Alonso should maybe retire from the sport. But, Alonso hit back with the most brilliant burn – and it was all on live TV, too.

Even though he DNFed from the 2017 Indy 500, Alonso definitely made his mark and was awarded ‘Rookie of the Year’. He got up to give a speech at the post-race banquet and it was absolutely brilliant.

When suggesting during the 2015 Spanish GP weekend that his ERS system wasn’t charging, his McLaren engineer told him that wasn’t the case. He replied:

“Maybe you have a virus on your computer, because it isn’t charging anything”

Sometimes, F1 drivers in adverts can be a little awkward. This Mercedes promo with Alonso and Lewis Hamilton – when they were team-mates in 2007, before it all went wrong – was a bit weird but overall was a good laugh.

A non-McLaren Honda-related radio message, surprisingly. Alonso was ranting over the radio long before that. Here’s a classic from the 2014 Brazilian GP weekend.

What’s your favourite Alonso moment? Let us know in the comments! 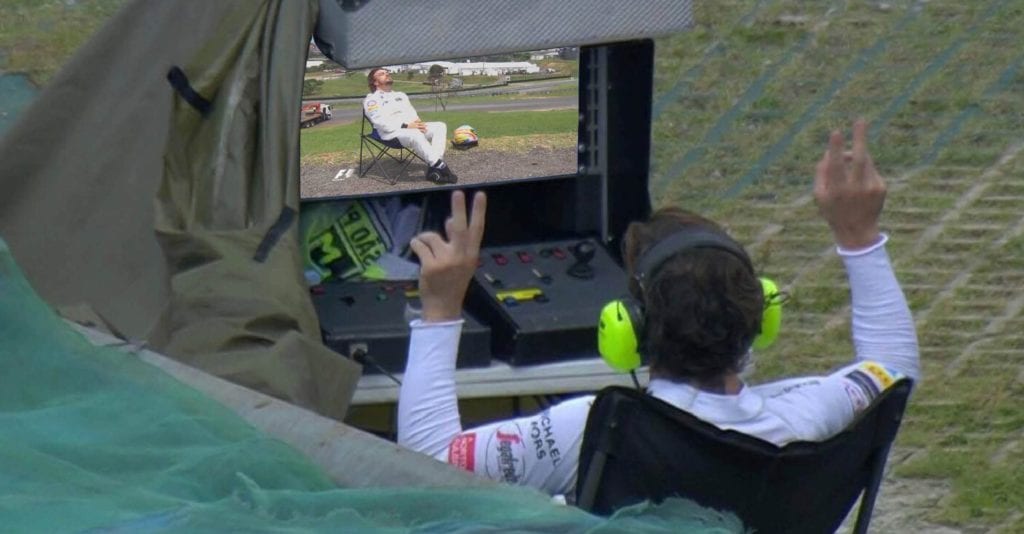