Every year the Goodwood Festival of Speed delivers the goods when it comes to the runs up the hill. Whether for their prowess in showboating, sheer speed from a gutsy driver, or an unexpected touching moment, there’s always plenty on offer to leave your eyes a little wider – or in one specific case this year, wetter.

We’ve already shared the clips of Esteban Ocon’s smoky demo run in the 2017 Mercedes and Romain Dumas’ record-smashing runs in the Volkswagen I.D. R, so here’s a selection of some of our other highlights from this year’s event.

OK, so driver Luis Perez Companc isn’t giving it the full beans, but there’s still something incredibly special about seeing – and hearing – the glorious Ferrari F2004 being driven. It was kind of a hard car to appreciate in its era seeing as Michael Schumacher was busy using it to win everything and make the sport a little bit boring, but now? We want to see more. More! Thankfully, we won’t have to wait too long – Mick Schumacher will be demoing the car during the German GP weekend in a few weeks.

Sticking with the theme of dominant F1 cars, here’s Indy 500 winner Takuma Sato (I’ll never tire of saying that!) giving Ayrton Senna’s title-winning McLaren MP4/4 plenty of stick up the hill. What’s really cool about this, however, is that this isn’t a car owned by McLaren. That means it’s still resplendent in its full Marlboro livery – and it just looks right.

F1 drivers doing their thang in an F1 car is cool an’ all, but what about when you give them a front-wheel drive Renault Megane to entertain in? Daniel Ricciardo succeeded in that task when he simply drove up most of the hill with the handbrake on. ‘I think I cooked the pads and the clutch’, he said afterwards, to the surprise of no one.

If it’s a bonkers high-speed run you want, then look no further than Petter Solberg’s son Oliver ragging a Rallycross Supercar up the hill in damp conditions at all sorts of unreasonable angles.

There are many, many reasons why it must be awesome to be an F1 driver, but getting to drive some wild machines from your team’s back catalogue has to be up there with one of the best. Both Carlos Sainz and Lando Norris got to have a turn in that monster that is the 670bhp Can-Am-spec McLaren M8D from 1970 – a car as fast as, if not faster than F1 cars of the time – but since Lando got to do his run in the wet, it gets the nod for being slightly more spectacular.

Whatever you think of the concept of motorsport without drivers, you can’t deny that the tech involved in autonomous cars is pretty cool. Roborace’s Devbot 2.0 did a few semi-driverless demos over the weekend, culminating in this fully-driverless run – and at a surprisingly decent lick as well.

The Festival of Speed is a great opportunity for drivers to be reconnected with their former steeds and double World Champion Emerson Fittipaldi got to drive the Lotus 72 he won the 1972 championship with. If you wanna know how much a car can mean to someone, just see how emotional it made Emmo.

A very emotional @emmofittipaldi was almost brought to tears after reuniting with his legendary championship winning Lotus 72 at the @fosgoodwood #FOS pic.twitter.com/eWFVKTtHM2

I’m not crying, you are!

Speaking of reunions, Damon Hill had the pleasure of being acquainted with the car that beat him in the 1994 championship – Michael Schumacher’s Benetton B194. It’s an unusual sight, sure, but we can definitely get behind F1 drivers having a go in the machinery of their former rivals.

(Tough luck if you’re expecting jokes about traction control or ‘Option 13’ – they’ve all been made already!)

Drifting has become a core attraction at FoS in recent years and while it’s always pretty cool, if you’re not into drifting, it can be kind of same-y. But when the vehicle doing donuts and sliding around has 1000bhp and weighs 10 tonnes, we’ll make an exception. Here’s the Kamaz Dakar truck showing off in a video which will make you be able to smell the tyre smoke and diesel fumes.

With Ocon potentially in the frame for his seat next year, Valtteri Bottas has to do everything in his power to prove that he’s the best choice for Mercedes. Apparently, that also includes doing the best show runs. Ocon’s were good, but given the state of his tyres and the fact his car appeared to break at the end of the run, Bottas probably just edges it.

The Brawn BGP 001 became an iconic F1 car almost immediately and it’s hard to believe that it’s already been 10 years since its fairytale title-winning season. For the first time since 2009, Rubens Barrichello got behind the wheel of the car that revived his F1 career and gave him a shot at the championship. It was a good-looking car then, and it’s a good-looking car now!

We’ve saved the best for last. All weekend, there were celebrations surrounding the 50th anniversary of Sir Jackie Stewart’s first world championship and also his 80th birthday. This involved regular runs of a convey of his three title-winning cars – Jackie in the 1969 Matra MS80, followed up by his sons, Paul and Mark in his other two championship winners, the 1971 Tyrrell 003 and 1973 Tyrrell 006.

That was great in itself, but on Sunday the Festival of Speed saw perhaps its most touching moment ever. As well as being joined by Dario Franchitti in another one of Jackie’s cars, the 1966 BRM P261, the three-time champion stopped on his way up the hill to hand a rose to his wife and childhood sweetheart, Helen, who is currently battling dementia – a cause which Stewart is currently tackling with the same level of determination as he did to his racing career and his campaign for safety. 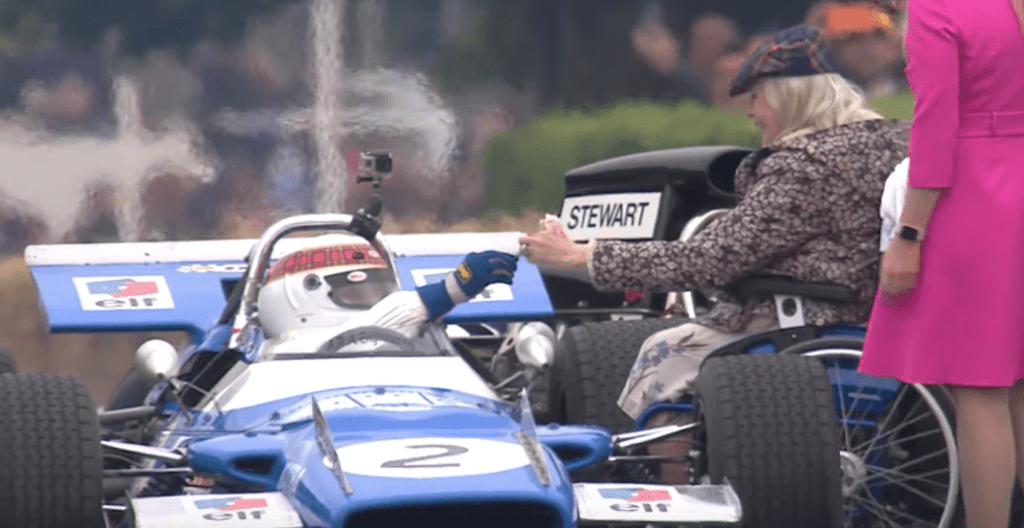