Can you believe that the season is almost over? From starting with cancellations in Melbourne, to sixteen races that spanned across various tracks in Europe and ending in Asia, this F1 season has been unusual but totally unforgettable. In this listicle, we say our emotional goodbyes to those that won’t be joining us for 2021.

Now technically, no teams are leaving F1 at the end of this year. In fact, nobody is going anywhere until after 2025 as all ten teams signed the Concorde Agreement in August reaffirming their commitment to the sport.

However, we’re going to experience some important name changes going on over the winter break.

Say goodbye to that iconic pink livery, as Racing Point rebrands to Aston Martin Racing for 2021, embracing both a ‘British racing green’ livery and a fresh driver lineup.

With Sergio Perez out of a drive, Sebastian Vettel will be departing the Ferrari squad and heading to pastures new with this team. Partnering with Lance Stroll for 2021, the team will have high expectations with a four-time world champion on their side as well as recently securing a win and third place at the Sakhir Grand Prix.

Aston Martin have been able to re-enter F1 60 years after they last competed thanks to Lance Stroll’s father, Lawrence, who has invested £182 million into the British manufacturer and taken a 16.7% in the company.

Anyone else going to miss that funky pink-panther-inspired car, or is it just us?

Having re-joined as Renault back in 2016, the team will once again bid farewell to the famous name and instead race under Alpine; a french manufacturer owned by the Renault Group.

Alpine will also be entering 2021 with a swanky new driver duo of Esteban Ocon and two-time F1 champion Fernando Alonso, who has returned from his departure from the sport in 2018.

Being well established in motorsport, with success in rallying and with a victory in the Le Mans 24 Hours, the Alpine rebrand will also see Renault ditch the black and yellow livery and instead opt for a red, white and blue colour scheme in homage to the French flag.

With a second-place podium finish thanks to Ocon at the Sakhir Grand Prix, as well as Daniel Ricciardo’s two podium finishes so far this year, Alpine will hope to continue this success in the next step of their motorsport journey.

Both Haas drivers announced their departure from the team towards the end of the season, with it quickly being quite evident that neither of them would be able to find a 2021 seat at such short notice.

For Romain, his season ended much more abruptly than any of us wanted after his serious crash at the Bahrain Grand Prix.

Grosjean has been racing full-time in the sport since 2012, but did compete in seven races in 2009 with Renault. He’s entered 181 Grand Prix and has been on the podium ten times throughout his F1 career.

Although he did at times have a bit of a reputation on the racetrack, overall he had heaps of talent and always seemed to be smiling around the paddock. He’s a big part of F1’s DNA and I think it’s fair to say that most of us will miss him around.

Similar to Romain, Kevin has also been booted out of his race seat at Haas to make way for a younger driver pairing of Mick Schumacher and Nikita Mazepin.

Magnussen made a big impact in the sport when he finished second place in his debut, but unfortunately the hype didn’t last long and he’s never visited the podium since. Kevin confirmed that next year he will be competing in the IMSA Sports Car championship with Chip Ganassi Racing. It’ll be a shame to see Kevin leave F1, and seems far too soon with him being just 28-years-old.

Kvyat has still yet to sign his contract for next year, and with reports that F2’s Yuki Tsunoda will be racing next year alongside race-winner Pierre Gasly, the future doesn’t look very bright for Daniil.

His time in F1 has certainly been more disorganised and sporadic than most, to say the least. He was promoted from Toro Rosso to partner Ricciardo at Red Bull, before being involved in a few crashes and being given the nickname ‘torpedo’ by Vettel.

He was demoted back to Toro Rosso, before being kicked out of that race seat mid-season, before making a comeback for the 2019 season with Toro Rosso again. Despite putting on some impressive performances with AlfaTauri this season, it looks like he will be replaced by Tsunoda and be out of a drive once again.

Despite being F1’s latest race winner, it seems like Checo will not be competing in F1 next season. Although being in contract with Racing Point in 2021, he announced his departure from the team to make way for Vettel.

I’m sure Sergio, as well as everyone else, expected another racing opportunity to have come his way by now; whether that had been with Haas, Red Bull or even Williams. However, as the season draws to a close, it appears that Checo will indeed be out of a drive and not returning to F1 in 2021.

He promises he has deals to come back in 2022, using next year as a sabbatical, but we’re still in shock at a driver with as much talent (and money), Sergio won’t be joining us on the grid next year. Madness.

There are others who look like they won’t be making a return to racing next year, with the most obvious being Nico Hulkenberg. He was the ultimate super substitute when both Racing Point drivers were struck down with COVID-19 over the course of the year, and was heavily rumoured as going to Red Bull to replace Albon.

Which brings us nicely onto another driver who is still without a confirmed drive next year: Alex Albon. He has had a tough year and has consistently underperformed next to his teammate Verstappen throughout the year. With talent like race-winner Perez out of a drive, many have questioned if he will be dropped by the team. Just rumours, but we await an announcement.

They might not be leaving the sport for good, but there are also some driver swaps which we should include too.

Ricciardo will go to McLaren for 2021, partnering Lando Norris. Carlos Sainz joins the Ferrari family, alongside Charles Leclerc. Finally, Sebastian Vettel ends his time with Ferrari and makes the change to Aston Martin. What a game of musical chairs!

In addition to drivers and teams heading for big change next year, we will also see certain technical regulations being banned including the revolutionary DAS system Mercedes brought in for the 2020 season. ‘Dual-axis steering’, or DAS for short, effectively adjusted the toe of the front wheels down the straights and in-between corners to help reduce the wear of the tyres.

The 2020 season has been so weird for so many reasons, but one of the more notable changes has been the calendar. Obviously heavily influenced by the global pandemic we’ve all experienced, F1 has visited some special circuits over the year.

Expect this to very much be a one-off and say goodbye to any hopes or dreams of a return to Portimao next year, for example. What can you expect is a very predictable and recognisable calendar, which will probably be the same for the next few seasons.

It’s been fun whilst it lasted.

What thing are you most sad about leaving behind in 2020? Let us know in the comments below. 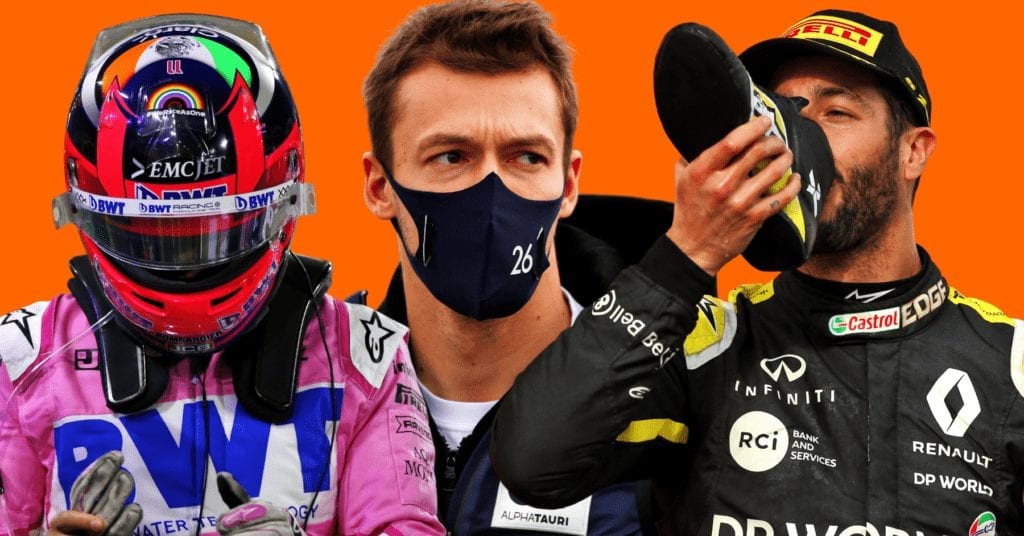