When you look at the dominance of Mercedes over the last few years it seems like there’s no end in sight. But in the past, top teams have, for one reason or another, produced a pretty awful car out of nowhere. Here are just 12 examples.

Lotus is known as one of the most innovative and forward-thinking teams in F1, with a long list of amazing cars. But that innovation sometimes backfired, and the Lotus 76 is just one such example.

Introduced in 1974 to replace the all-conquering Lotus 72 which first had first raced in 1970 (and won Lotus three out of the last four constructors’ titles), the 76 wasn’t actually an updated car at all, but just a heavily revised 72 with a few new innovations.

One of those was an electrically-operated clutch intended to speed up gearchanges – years ahead of its time, but it didn’t work, was very heavy, and the drivers hated it. The team also tried a biplane rear wing to try and get more downforce (again, it didn’t work) and the car struggled to get heat into its front tyres, meaning it had colossal understeer.

Drivers Ronnie Peterson and Jacky Ickx tried it for three races but didn’t record a single finish, so went back to the 72, which Ronnie used to win three races. The 76 reappeared towards the end of the year and Peterson managed a fourth place at the Nurburgring, but the team had to accept the concept didn’t work and went back to the 72 for 1975.

The designer, Mauro Forghieri, was removed as technical director and a ‘new’ 312B3 was designed. This turned out to be worse than the B2 had been, only scoring three points all year and being so bad that Ferrari couldn’t be bothered to turn up to some races in the middle of the season.

Forghieri was then brought back as technical director and repurposed the ideas from his ‘spazzaneve’ concept for 1974, which went on to win three races and take 10 pole positions, a year later than it otherwise might have done. Oh, Ferrari…

How about a car so bad that it never even raced? After a drubbing at the hands of Ferrari in 2002, Ron Dennis demanded the team go radical for 2003. With Adrian Newey onboard that should have resulted in something mega, but in a rare ‘off-day’ for Newey, it didn’t work at all.

It failed crash-tests twice, and in testing was proving to be both unreliable and difficult to work on thanks to its incredibly tightly-packaged rear end. A number of car failures kept causing accidents in testing and the drivers started refusing to drive it.

Most of the season had gone by before the project was abandoned, and to make matters worse Kimi Raikkonen was challenging for the championship in an updated version of the 2002 car. If they’d spent more time developing that and not chasing the MP4-18, who knows how the 2003 season could have gone?

BMW-Sauber went from a midfield team in 2006, to best of the rest behind McLaren and Ferrari in 2007, to winning a race and challenging for the championship in 2008.

But for BMW, winning the title in 2008 wasn’t part of their plan, and even though it looked like Robert Kubica could have given Felipe Massa and Lewis Hamilton a run for their money across the season the team pretty much sacked off the rest of the year to focus on the new car and the rule changes for 2009.

Big mistake. Kubica had good pace in the first race in Australia, but it was a false dawn because the F1.09 was awful and the team spent much of the season languishing in the lower-midfield. Results improved towards the end of the year but any hopes of hitting the ground running in 2010 were dashed when BMW announced it was pulling out of F1.

Williams has had far worse seasons than it did with the FW20 in 1998 when the team finished third in the constructors’ championship. But what makes the FW20 such a shocker was that it came off the back of seven seasons spent challenging for (and usually winning) titles.

The team was suffering from having lost Adrian Newey at the end of 1996 and Renault’s withdrawal as a works engine supplier. As a result, 1998 ended up being the first season where Williams failed to win a race since 1988 and only the third time since 1977. Yeah, it was an awful year.

Jacques Villeneuve drove the wheels off the thing all season, but could only muster a couple of podiums and was never in with a shout of defending his championship as Ferrari and McLaren dominated.

There were plenty of times when Williams were slower than Benetton and Jordan, too, and it was only really consistency that enabled it to stay ahead of them in the constructors’ battle. Apart from a brief revival during the BMW-era (and with Pastor Maldonado’s win, obviously) thing haven’t got much better since.

A quick look at the stats for the Brabham BT26 tells you that it was on pole five times, won two races and finished runner-up in the 1969 constructors’ championship. But a fairly important part of any car is its engine, and when the BT26 had a Repco unit in the back in 1968, it had a truly woeful reliability record.

Repco engines had powered Brabham to back-to-back titles in 1966 and 1967, with Jack Brabham and Denny Hulme taking a drivers championship apiece. But with the Cosworth DFV coming on strong for Lotus, Repco felt it needed to up the power of its own engines and in doing so completely ruined the teams chances.

In fact, the car only saw the finish twice all season – at the Nurburgring, when Jochen Rindt was third and Brabham himself fifth, and the team was only eighth in the championship – not great for any team, especially one that had won the last two championships! It was such a disaster that Repco withdrew from F1, leaving Brabham to put Ford engines in the BT26 the following year, transforming it into a race winner.

Speaking of bad engines ruining cars, we have to mention the McLaren-Honda saga. 2017 was a bad year for the team having shown signs of improvement in 2016, but the chassis at least looked good. The first year of the partnership in 2015, however…

Sure, no-one expected Honda to get it right first time, but even so, 2015 was a catastrophically bad year for the team.

Yes, the engine was underpowered and unreliable, but even at tracks where power wasn’t as much of an issue the MP4-30 was horribly uncompetitive, resulting in McLaren’s worst season since 1980, beating only Marussia in the constructors’ championship.

Another Lotus failure, the 80 followed on from the highly successful 78 and 79. Those cars utilised ground effect to generate enormous downforce from the underbody as well as the wings, but with the 80, the idea was to turn the whole car into one big wing.

The car tested in early 1979 and had no wings at all, the theory being that the underbody aero would provide so much downforce that wings would just produce drag. However it was quickly discovered that the long nose section (complete with its own mini set of skirts) was easily damaged, so it was replaced with a conventional front wing. A rear wing was later added too, making the car look much more conventional than originally planned – apart from the sidepods, which extended all the way to the rear wing.

At high speeds the car worked great, but at low speed it was all over the place, as it was prone to suddenly losing and then regaining all its downforce as the air pressure moved around – an effect known as ‘porpoising’.

Carlos Reutemann refused to drive it but Mario Andretti gave it a shot, finishing third in the Spanish Grand Prix, but after two more outings it was decided that it was no better than the older 79 and the project was canned.

There’s a theory that racing cars that have atrocious liveries are going to be slow. It’s obviously a joke, but judging by the Renault R27, you might wonder if there’s some truth to it.

After winning back-to-back titles with Fernando Alonso in 2005 and 2006, Renault had very much established itself as a top team. Even with Fernando leaving for McLaren in 2007, you’d have expected Renault to still be somewhere in there with the experienced Giancarlo Fisichella and promising youngster Heikki Kovalainen, but it just wasn’t.

BRM was one of the top teams in the mid-1960s, winning both titles with Graham Hill in 1962 and then finishing runner-up in the constructors’ from 1963-65.

Things were going pretty well in 1966 too. Although its car, the P261, was now into its third season of competition, Graham Hill finished regularly on the podium and Jackie Stewart won a race. With three races to go, there was still a (very) outside chance of both titles.

However, BRM had been trying to introduce a new car all season, the P83, the centrepiece of which was its H16 engine – basically just two 1.5-litre eight-cylinder engines plonked on top of each other. It made its debut at Monza, and whilst it was fairly powerful it was also very heavy, complex, and unreliable. When mounted in the car it was so high up that it ruined the weight distribution. Basically, BRM had replaced it’s old, capable but outdated car with one that was slower, heavier and less reliable. Quite the gamble!

Neither BRM driver finished another race that year (although a H16-engined Lotus somehow managed to win the US GP in the hands of Jim Clark) and Hill was so frustrated he left for Lotus for 1967. The team carried on with the H16 concept that year and whilst it improved a bit (Stewart took a podium with the car at Spa) the project was ditched for 1968.

The 1979 success was particularly impressive given that ground effects were now definitely a thing in F1 and the big, wide flat-12 engine Ferrari was using didn’t help in that regard. So, for 1980 the 312T4 was updated into the 312T5, Ferrari hoping to get one more season out of the car whilst it developed a turbo-engined machine for 1981. However, aerodynamics had moved on so much that Ferrari went from champions to virtual backmarkers.

Scheckter only made it into the points on one occasion and even failed to qualify in Canada, leading him to retire at the end of the year. Even the great Gilles Villeneuve could manage nothing with the car, scoring just six points all year as Ferrari slumped from reigning champions to 10th in the constructors’ championship.

After four straight titles for Sebastian Vettel and Red Bull from 2010 to 2013, Red Bull suffered a bit of a setback at the beginning of the turbo era as Mercedes stole a march on everyone. The team had still managed three wins though and though the Renault engines weren’t great, the chassis was still good enough to compete when pure horsepower was less of an issue.

For 2015 we expected Renault to catch up to Mercedes in terms of power and thrust Red Bull back into title contention. That didn’t happen though; Renault got things wrong and was even further behind than it had been in 2014. No worry though, Red Bull would make up for it with a well-sorted chassis and good aero, right?

Wrong. The RB11 was a bit of a mess all around and at the start of the season was even struggling to beat sister team Toro Rosso. Things picked up as the season wore on, but the team only scored three podiums all year in what was Red Bull’s worst season since 2008. 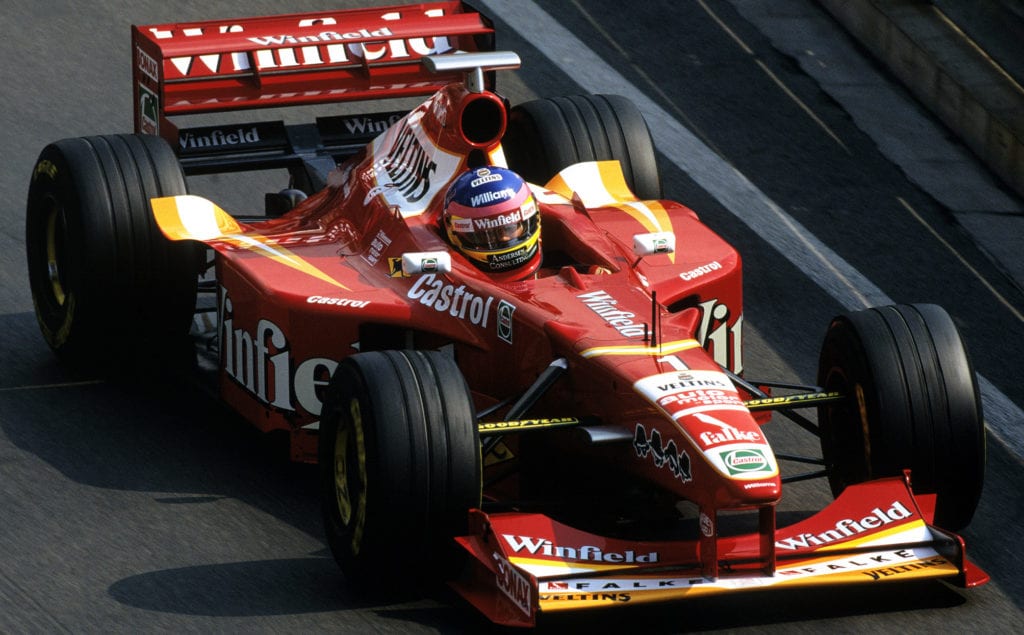