13 Ridiculous Sponsors That Have Been In Motorsport – WTF1
Skip to content
×
Fun , Gallery , Retro , WTF
4 comments

Sponsors are an essential part of motorsport. Although some industries gravitate towards sponsoring in motorsport, there have also been several somewhat random names and logos that have adorned past racing liveries. These are our favourites.

In 1997, the struggling Tyrrell team coined a deal to coincide with the UK’s new TV channel, Channel 5. Now, I don’t know about you, but when I think of F1 and tv programmes, the first thing that comes to mind is definitely not Xena: Warrior Princess.

However, that’s exactly what was displayed over the Tyrrell car’s engine cover, with Xena on one side and her sidekick Gabrielle on the other. Unfortunately, their battling skills did little to help the team and they disappeared from the grid the following season.

Everyone’s favourite ‘I’m not entirely sure what that is’ meat product, SPAM. This pre-cooked canned pork delight appeared on Lake Speed’s #9 NASCAR in 1995.

Although for many the thought of SPAM makes you feel nauseous or of James May, the sponsor appeared in NASCAR more than once.

Not content with the exposure gained, they returned in 1997 but this time for the #91 of Mike Wallace. Mmmm, delicious.

Markus Pommer has competed in the now-folded Formula 2 championship and F3 championship with sponsorship from this rather interesting site. This website’s content definitely comes with a heavy NSFW warning and has nothing to do with car restoration…

Over to America again, and this time for a skin cream remedy for diaper redness by the name of Boudreaux’s Butt Paste. Seriously. The decision to have this company’s logo on a car certainly wasn’t a rash one *ba-dum*.

It appeared on the car more than once, notably on the #24 of Kim Crosby and most recently on the #04 of Jeremy Clements. It’s gone down as one of the cheek-iest sponsors in the series.

This famous men’s magazine sponsored Hesketh Racing during the second half of the ’70s. The publication was a mix of urban features, softcore pornographic pictorials and featured a model as their ‘Penthouse Pet’ of the month.

The magazine worked alongside another sponsor, Rizla, and showed a Penthouse pinup girl holding up the popular rolling paper on the side of the car. An innovative combination of two sponsors and certainly gives off very ’70s vibes.

DON’T WANNA CLOSE MY EYESSSS- oh, sorry. I was just in a moment.

In 2001, rock band Aerosmith adorned the Heritage Motorsports car of Jeff Ward for that year’s Indianapolis 500. It was all part of the promotion for their new album. Sadly for the team, there was no ‘Sweet Emotion’ as Ward finished the great race in 24th.

Behold, one of the most famously controversial sponsors in F1.

Condom company Durex sponsored the Surtees team in 1976. Although we might find it funny now, back then it caused a massive inconvenience for television broadcasters. The sponsorship deal was so contentious that almost all of the season was deemed unsuitable for broadcast on the BBC, including the British Grand Prix.

The Winner Takes It All? Not for Slim Borgudd.

Borgudd, an occasional session drummer for ABBA, made his F1 debut in 1981 with ATS. He chucked the ABBA logo along the side of the car in a hope to attract more investors. Despite scoring a point in that year’s British Grand Prix, eventually, the ‘Money Money Money’ ran out, and the era of Swedish pop group sponsorship was over.

Back in 1999, the Arrows F1 team found an investor in the shape of a Nigeran Prince. Prince Malik claimed to be from his native Royal Family and have previous experience with Le Mans 24 Hours. Malik wanted fame too, even hiring a PR agency to make him as well-known as Eddie Jordan.

Through the T-Minus brand he created, Malik promised that money would be made by selling an energy drink and related merchandise. Sound familiar?

We’re not claiming to be marketing professionals by any stretch of the imagination, but surely creating a brand and THEN deciding what it should sell is the wrong way round?

Oh, you knew we had to include this gem. Rich Energy is the drinks company that thinks it’s bigger than most competitors on the market even though nobody has ever heard of it. When this brand became a title sponsor of the Haas F1 team several years ago, everyone raised their eyebrows about where this ‘Rich Energy’ had appeared from.

There was very little information online, and nobody had ever heard of or let alone tried the drink. Of course, the odd person claimed that their next-door neighbour’s husband had a friend whose cousin twice-removed knew someone who had tried the energy drink, but generally, the whole drink seemed to be a total myth.

Their involvement with F1 was a total disaster and will go down in history as one of the sport’s weirdest sponsorships. Worryingly, it appears Rich Energy could be making a comeback to F1 with an announcement expected in February 2021.

There’s nothing outwardly strange about the 1995 Le Mans-winning McLaren F1. It looks relatively normal. That was until you looked into its main sponsor – ‘Tokyo Ueno Clinic’.

It turns out it’s a Japanese plastic surgery clinic with a speciality in, uh gentleman’s genitalia. Presumably winning the world’s most famous endurance race was great publicity for them, and hey, at least they didn’t make a complete cock of themselves… or maybe they did?

On that subject, let’s talk about this next special sponsor. Goodness, there are so many puns that could be used here, but we don’t know how long we could keep it up.

In the early 2000s, Mark Martin raced in NASCAR with Viagra sponsorship. Martin has had a long-lasting career but has since retired, although memorabilia of the iconic livery is still a trendy collector’s item.

NASCAR again, and two words we certainly never imagined would be in the same sentence: Juan Pablo Montoya and Taylor Swift.

In 2012, everyone’s favourite hot-headed Colombian ran a livery with a giant Taylor Swift face on the bonnet as promotion for her album, Red. I’m not sure NASCAR fans are Swift’s target audience, but hey, that’s marketing for you!

I suppose this ‘Love Story’ was better than leaving a ‘Blank Space’. It’s okay; we will see ourselves out.

[This article was originally published on March 28th 2013 by Dan Thorn, but has been modified and updated.] 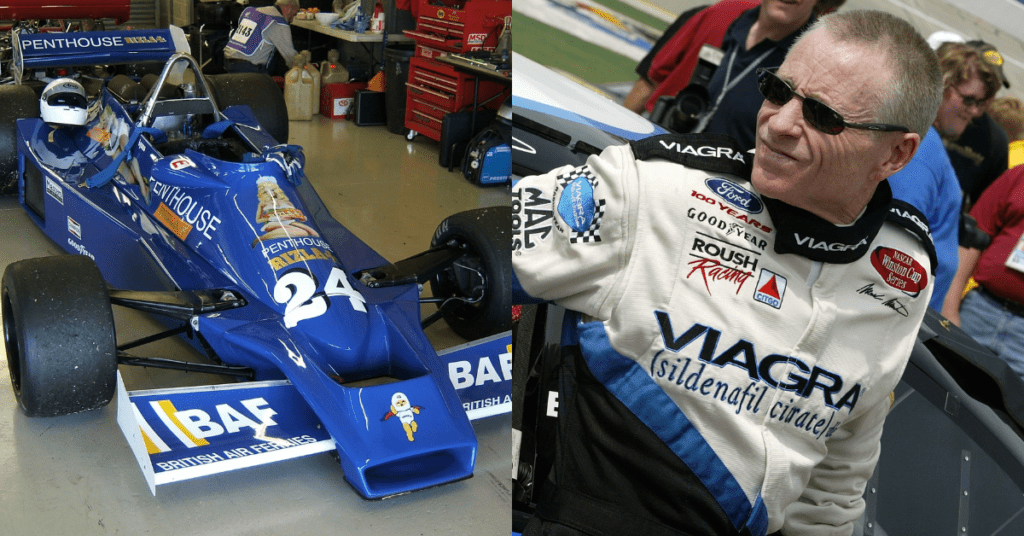