Well, here we are again. We’re well into December and (with a couple of exceptions) most of the major championships are done and dusted. It’s been a pretty exciting year for motor racing – here are some of the most memorable moments.

Kris Meeke was comfortably leading Rally Mexico when, right at the end of the very last stage, he made an error and speared off the road. Disorientated, Meek then had to navigate his way through a car park before finally finding his way back onto the stage. He still won!

Pitting on purpose in the sprint race in Formula 2 was pretty much unheard of until this year, when Charles Leclerc and Prema decided to do just that in Bahrain.

He had eight laps to make up 20 seconds and recover from 14th to first – which of course he did. It was his first win in the series and set him on course to win the championship in dominant fashion. Thanks to drives like this, the hype for him at Sauber next year is very, very real.

Remember when people said Sebastian Vettel couldn’t overtake? He’s long since disproved that, but even so, his pass on Daniel Ricciardo in China was something special.

Lunging around the outside, he was wheel-to-wheel with the Red Bull at the exit of turn six. He got ahead, but not after a bit of wheel-banging. “I’d be lying if I said it wasn’t intentional” Ricciardo cheekily said afterwards.

Tyres are heavy old things, but you wouldn’t know it from watching this Porsche mechanic at work in the WEC. He became something of a cult hero after he was spotted removing a wheel with one hand and putting a new one on with the other in a single beautiful, effortless, sweeping motion. Those things weigh almost 20kg each!

One of the most entertaining races of the year? Probably. The best Formula E race of all time? Almost certainly.

It had everything, from incredible overtakes to clumsy spins and dramatic accidents. Somehow Lucas di Grassi managed to make his battery last for longer than should even be possible and win, despite having to pit for damage early on.

Losing a win on the last corner of a race must suck, but to lose it because of a track blockage that you had absolutely nothing to do with? Ouch.

Unfortunately, that’s exactly what happened to GT LM class leader Antonio Garcia, who was in the wrong place at the wrong time on the last lap and dropped from first to fifth as teammate Tommy Milner took the victory.

Perhaps the biggest ‘how on earth did they walk away from that?!’ moment of 2017 was Scott Dixon’s terrifying accident in the Indy 500. He was hit by an out-of-control Jay Howard and sent flying into the air, landing on top of the barriers. Incredibly he managed to walk away with little more than a sore ankle.

All the hype of the Indy 500 was around Fernando Alonso, and he was delivering on it until his Honda engine expired towards the end of the race.

Takuma Sato put in a stunning performance to go on and win. It was a pretty special moment, which like most moments in motorsport, is made infinitely better by the addition of Japanese commentators, who in this case were going bonkers for their own countryman.

This year’s Le Mans 24 Hours was absolute chaos as each LMP1 crew did their best to try and not win the race, almost handing overall victory to LMP2.

The GTE class was as close as ever though, and in the closing laps it came down to a battle between Jonny Adam in the Aston Martin and Jordan Taylor in the Corvette – and a mega battle it was too!

It’s been another epic season in MotoGP and although Marc Marquez ended up taking his fourth world championship, for much of the year it was a pretty close run thing between him and Ducati’s Andrea Dovizioso.

They’d already had one last lap, last corner scrap in Austria and presumably had so much fun that they did it again at a soaking Motegi in Japan, with the same outcome – Marquez trying something, and Dovi keeping his cool to stay ahead.

The nature of ovals generally means that if a driver gets sideways in an IndyCar, they’re heading straight to the scene of the accident, because it’s incredibly difficult to save a slide.

Someone forgot to tell that to James Hinchcliffe though as he somehow managed to recover from this colossal slide during the race at Pocono. Just…how?!

If you think Hinch has save of the season locked down, wait until you see this. Unlike IndyCar, you expect to see plenty of sideways action in historic racing but even so, there’s still such a thing as too sideways, as Richard Meaden found out during the Goodwood Revival. Somehow he not only managed to keep his Alfa Romeo Giulietta on the track, but recovered to go on and win, too!

Every year you get some kind of bonkers accident happening at Macau and 2017 was no different. During the qualifying race for the GT World Cup, Dani Juncadella lost it whilst running in fourth place, triggering this spectacular 16-car pile-up.

The iconic Macau F3 race saw perhaps it’s most spectacular finish ever this year, too. Ferdinand Habsburg gave it everything to try and take the lead away from Sergio Sette Camara on the final lap, but a final corner lunge ended up with both drivers in the wall and Dan Ticktum coming through to win.

Ahh, the battle that made us happy and sad at the same time. Happy because it was so good, and sad because we should have been seeing so much more of this over the last few years, but which thanks to Honda engines hasn’t really been possible. It was a mega fight – let’s hope we see more of it in 2018!

What have been some of your favourite motorsport moments from this year? Let us know in the comments! 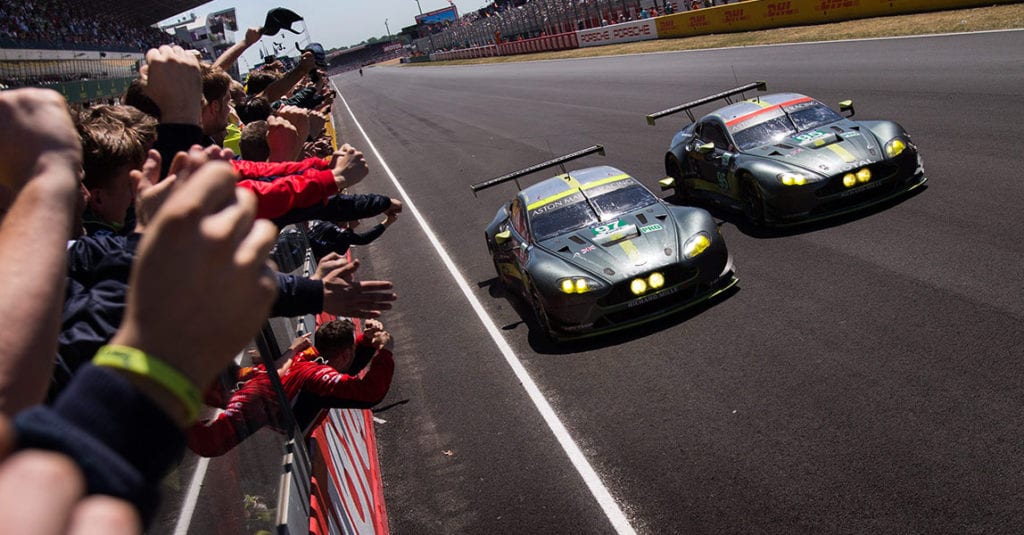