16 Cars Were Involved In This Ridiculous Daytona 500 Crash

The Daytona 500 is one of the most significant events on the NASCAR calendar. However, no sooner had the 2021 race kicked off, 16 cars were involved in a colossal crash. To top that off, lightning strikes were reported near the circuit, and the race was suspended until the storm passed.

A chilled return to racing then…

With 40 cars running in the Daytona 500, the 16-car pile-up saw 40% the field involved on the 15th lap of the race, with big names like Ryan Newman being forced to retire.

Fortunately, nobody was harmed in the crash caused by driver Aric Almirola getting their car sideways after being hit by Christopher Bell.

David Ragen, one of the drivers taken out in the crash, was able to jump onto social media during the red flag to vent his frustrations.

“That is not where we wanted to be. At the start of these 500-mile races, every driver says ‘I’m going to take it easy to begin with, I’m going to feel my face car out, and I’m going to make it to the end and try to win the race’.

“I don’t know what happens, but when they drop the green flag, most guys lose their minds and start pushing, shoving and side drafting.”

Mr. Worldwide, our stage is yours!@pitbull delivers the command to start the engines at the #DAYTONA500! (📺: FOX) pic.twitter.com/0h1OCZL88I

Before the race, Pitbull, the new co-owner of the Trackhouse Racing NASCAR team, gave an energetic rendition of the “start your engines” command. Unfortunately, it didn’t help bring any luck to his driver Daniel Suarez who was involved in the early collision.

Either way, it’s a totally bonkers way to start a race, and we’re so glad to see all drivers walk away. 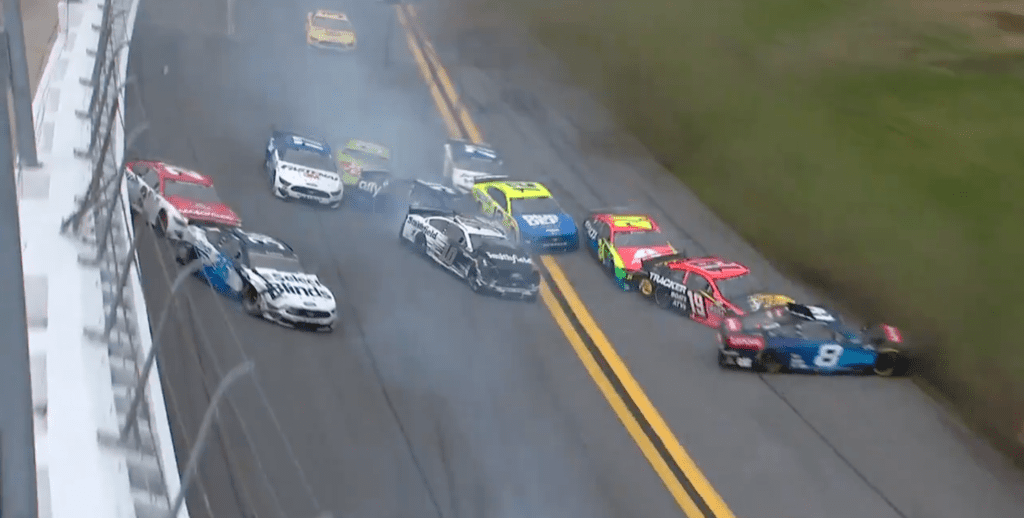