With 35 cars trying to qualify and only 33 places on the grid, there were always going to be two incredibly disappointed drivers at the end of Saturday’s qualifying session – but nobody was expecting one of them to be James Hinchcliffe.

Aside from being one of the top drivers in the series, he’s also pretty handy at Indy – you have to be to take pole position, as he did in 2016. In a day disrupted by rain Hinch was the first car out on track after one of the delays, which meant track conditions were less than ideal and his four-lap run left the Schmidt Peterson Motorsports driver right down at the bottom of the timesheets.

A couple of late improvements saw him drop below the threshold and he had to run again, but a wheel vibration meant he had to abort his second attempt and pit for new tyres. With other drivers also out trying to improve their position, time ran out for another run and Hinch, shockingly, was left as a non-qualifier for this year’s race. It’s kinda like if Daniel Ricciardo failed to qualify in Monaco next weekend – that’s how huge it is.

Hinchcliffe was joined by Pippa Mann, which is perhaps even more heartbreaking given that this is her sole IndyCar race of the season.

Despite failing to qualify, all might not be lost for Hinchcliffe. The other three SPM cars of Robert Wickens, Jay Howard, and Jack Harvey made the field, and if the team wants, it could withdraw one of the drivers and replace him with Hinch. It’d be seriously harsh, sure, though a similar thing happened back in 2011 when Ryan Hunter-Reay lost out, but car-swapped with Bruno Junqueira in order to make the race.

Aside from the dramas at the back, the drivers in ‘Fast Nine’ (who’ll go on to compete for pole tomorrow) features plenty of the usual suspects, including all four Penske drivers. Helio Castroneves topped the times from Indy specialist Ed Carpenter, followed by Simon Pagenaud, Will Power, Sebastien Bourdais, Spencer Pigot, Josef Newgarden, and Scott Dixon. Oh yeah, and Danica Patrick – not bad for someone who hasn’t raced an IndyCar for seven years! 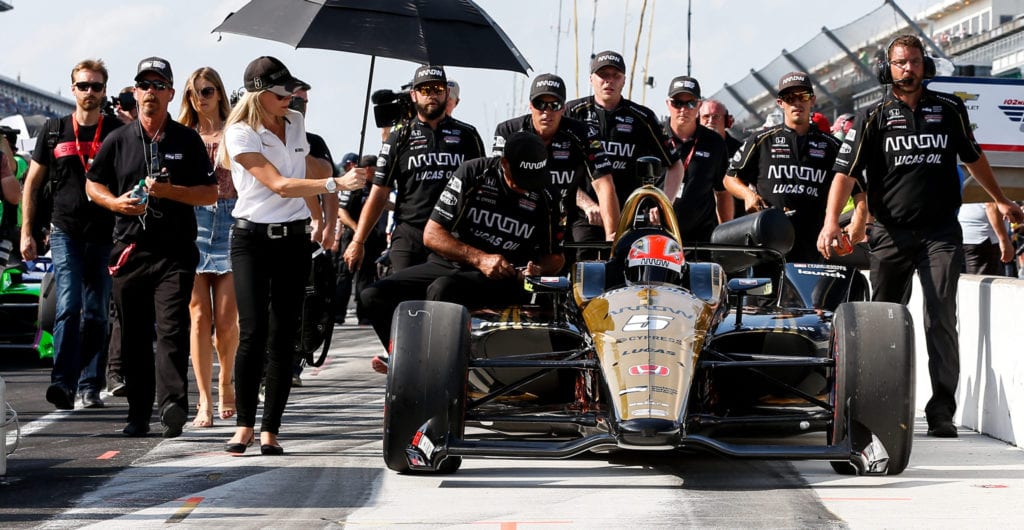