After he won his fifth title in 2018, we took a look at which of Schumacher’s records he could beat at some point in the future. Thanks to another strong championship-winning season, Hamilton has already beaten one of them (the most races led, which he broke at the 2019 Russian GP) and is well on the way to smashing out a few more in 2020.

Of course, all this is assuming that Mercedes can produce another brilliant car. And even though the trend of 2019 hints that 2020 could be one of the most competitive seasons for years, the fact that Mercedes hasn’t been beaten since 2013 would suggest that they’ll probably be the team to beat again. Plus, with a record 22 races next season, he’ll have plenty of opportunities to tick off the achievements.

The big one is almost certainly going to go in 2020: if Hamilton wins more than eight races, he’ll have more grand prix wins than any other driver. There was a time when winning that many grands prix in a season was a rare occurrence but, since 2014, he’s won more than 10 races in each season apart from 2017, when he ‘only’ took nine victories.

When will he break the record? Well, 2019 was the first time Hamilton managed to win eight races before the summer break as he usually gets stronger as the seasons go on. If he starts the season as well as he did last season then he’ll be getting close by the Hungarian GP in August. But chances are it’ll be closer to the end of the season when he breaks it – perhaps sometime around Singapore, Russia, or Japan.

This one should be dealt with pretty easily to the point where if it takes him more than five races to beat this one, we’ll be thoroughly shocked. OK, maybe six races if you account for one slightly sub-par performance.

But whether its five or six races, that should make either the Dutch or Spanish GP the point where he’s stood on more podiums than anyone else. But if it takes him seven races to achieve the five podiums he needs, that would mean he breaks the record in Monaco – which would be a rather special place to break a record, wouldn’t it?

Hamilton has only failed to score in one race over the last three years – the 2018 Austrian GP, when his car broke down. Therefore, it seems reasonable to believe that it’ll only take him until the ninth round in Canada to break this record… however, there is a slight chance that may not be the case.

You see, at the moment, Hamilton is currently joint second on the list with Kimi Raikkonen, who has also scored points in 213 races and is also racing in 2020. If Alfa Romeo builds a surprisingly excellent car and Kimi can score points in every race up until Canada, Hamilton will have to share his record until Raikkonen fails to finish in the top 10. Alternatively, if Hamilton has a DNF, Kimi could even be the one to break Schumacher’s record. I wouldn’t bet on it, though…

Schumacher qualified on pole eight times at the Japanese GP, while Hamilton has eight pole positions in Australia. Ayrton Senna also shares this record, having taken eight poles for the San Marino GP at Imola.

That means this record should be the first one Hamilton beats in 2020 since the Australian GP is the season opener. And since he’s been on pole there for the last six years in a row, it’s hard to see anyone stopping him.

Schumacher won 72 of his races for Ferrari and the other 19 for Benetton, while Hamilton started with 21 victories for McLaren before adding 63 (and counting) for Mercedes. 10 more wins at the wheel of a Silver Arrow would see him usurp Schumacher as the most successful driver/team combination of all-time. Of all the records he could break in 2020, this is likely to be the most difficult one for him to achieve – though that’s not to say it’s altogether unlikely.

While the other records all seem very much within reach as long as his car is at least roughly in contention, winning 10 of the 22 races could be a bit of a stretch. If Mercedes, Ferrari and Red Bull all come out with evenly matched cars, then there are four or five drivers (or maybe six, if Alex Albon hits the ground running) who will be regularly vying for wins and making it harder for Hamilton to rack up the victories. This is pretty much what happened after the summer break in 2019 as Hamilton ‘only’ won three of the last nine races.

If he does beat this record, it’ll probably happen right near the end of the season in Brazil or Abu Dhabi. If not, he’ll have to wait until 2021 – unless he makes that rumoured switch to Ferrari, anyway…

Schumacher has some other records which Hamilton could theoretically break in 2020, but are highly unlikely.

Hamilton needs eight hattricks – pole, win, and fastest lap in the same race – to overhaul Schumacher’s tally. But seeing as how Hamilton ‘only’ has 15 in his whole career (and just one in the last two years), that one might have to wait a while – and possibly forever.

Hamilton also needs to lead another 616 laps to beat Schumacher. However, the most laps he’s managed to lead in a single season was 587 during 2015 – his most dominant championship win. He generally manages just over 500 laps in the lead per year and, even with the extra race on the calendar next season, it’s him leading enough to see this record fall in 2020.

There are also two major records which he could equal this year, but can’t beat. The first is for the most wins at the same grand prix. Schumacher won the French GP an incredible eight times and if Hamilton can win either the Canadian or Hungarian Grands Prix in 2020, he’ll match the record.

The other one is probably the most important of the lot: if Hamilton wins the title, he’ll join Schumacher in having won seven World Championships. For all the other records within his reach, that’s surely the one that would mean the most. 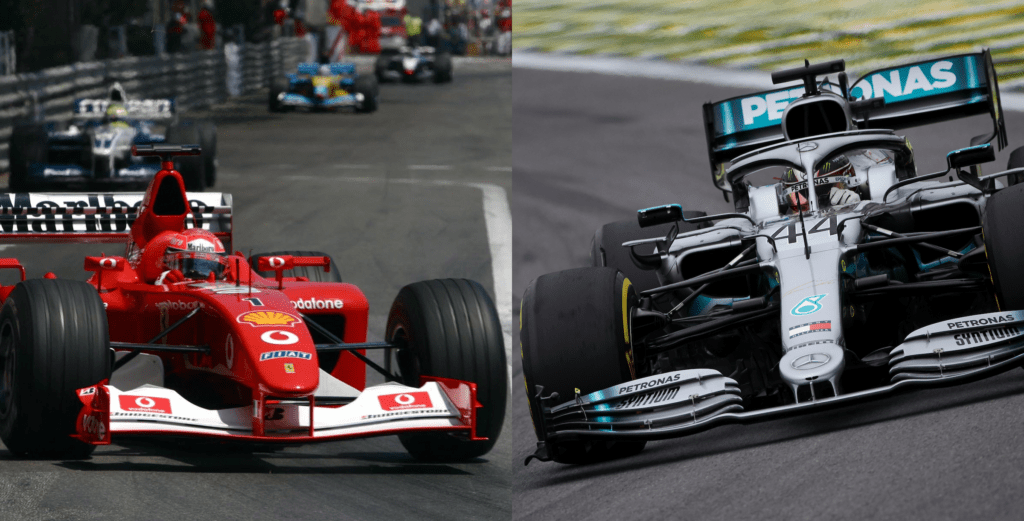