Fans love to use teammate comparisons as a way of deciding which drivers are best. “Lewis Hamilton beat Fernando Alonso in the championship in his rookie season so that obviously means he’s the better driver!” But while you can learn a lot from comparisons, they never tell the whole story.

If you start judging drivers using the relative performances of their teammates, where do you stop? To highlight that, we’ve come up with some teammate ‘chains’ which show just how ridiculous it can get.

Think Ralf was just Michael’s less successful younger brother? Think again! Although Michael has all the titles and most of the wins, amazingly it turns out that if the two had ever been teammates, Ralf would have come out on top.

How do we know this? Well, between 2010 and 2012 Michael was teammate to Nico Rosberg and in all three seasons, Nico finished ahead in the championship: a comprehensive defeat. After Schumacher, Rosberg spent the next three seasons being beaten at Mercedes by Lewis Hamilton.

2000, Ralf was driving for Williams alongside debutant Jenson Button. He finished fifth in the title that year with three podiums and 24 points, while Button scored just half that amount. Fast-forward over a decade to 2011 and Button is teammates with Lewis Hamilton, beating him by a massive 43 points in the championship.

When Hamilton joined Mercedes in 2013 he beat Nico Rosberg for three seasons in a row, and Rosberg had spent the three seasons before that beating Michael in his return to the sport. And that’s the link – Ralf beat Button, who beat Hamilton, who beat Rosberg, who beat Michael, proving that Ralf was definitely the best Schumacher brother.

We’ve always had our suspicions, but this confirms it. Will Stevens made his F1 debut for Caterham in the final race of 2014 and finished 17th, while teammate Kamui Kobayashi didn’t even make the chequered flag. 1-0 Stevens.

It was no mean feat given that Kobayashi beat the legend that is Nick Heidfeld when they were paired at Sauber at the end of 2010, and Heidfeld himself beat Felipe Massa at the same team in 2002. Massa then of course went on to join Ferrari, and in 2008 he beat Kimi Raikkonen. So there you go. Proof that Will Stevens is better than the 2007 champion. If only he’d been given a better chance.

Karthikeyan was dropped from HRT midway through 2011 in favour of Daniel Ricciardo. But when Karthikeyan returned for his home race in India (in place of the other HRT driver, Tonio Liuzzi) he instantly showed that the team had been wrong to drop him, finishing 17th, one place ahead of Ricciardo.

Danny Ric progressed through Toro Rosso and into Red Bull, and in his debut season with the team famously trounced four-time champion, Sebastian Vettel. Vettel was unaccustomed to being beaten by Aussies, having spent five seasons solidly beating Mark Webber, who in turn had spent two years finishing ahead of David Coulthard in the championship before Vettel came along.

No, really, he is. During his final season with Lotus in 2011 he finished ahead of Heikki Kovalainen in the championship, and Kovalainen beat Giancarlo Fisichella at Renault in 2007.

Fisi beat Button at Benetton in 2001, Button outscored Hamilton at McLaren in 2011 (as we’ve already established), and Hamilton famously beat Fernando Alonso on countback during the 2007 season. Alonso was teammates with Trulli for a couple of years and beat him in 2003, thereby proving that Jarno Trulli really was better than Jarno Trulli.

Despite their obvious similarities, Maldonado doesn’t have a complete teammate chain back to Ayrton Senna. But thankfully, there’s a much more concrete connection which proves that he was faster.

Ayrton once said, “If you think I’m fast, just wait until you see my nephew Bruno.” There’s no way Ayrton would lie about his young nephew being faster than him, so you have to say that it’s a given that Bruno Senna is better than Ayrton was. And who was Bruno’s teammate at Williams in 2012? Maldonado. And who ended the season with the most points? Maldonado. Therefore, Maldonado is better than Ayrton. It’s a fact.

Can you come up with any ridiculous teammate chains that ‘prove’ which drivers were better than others? Let us know in the comments! 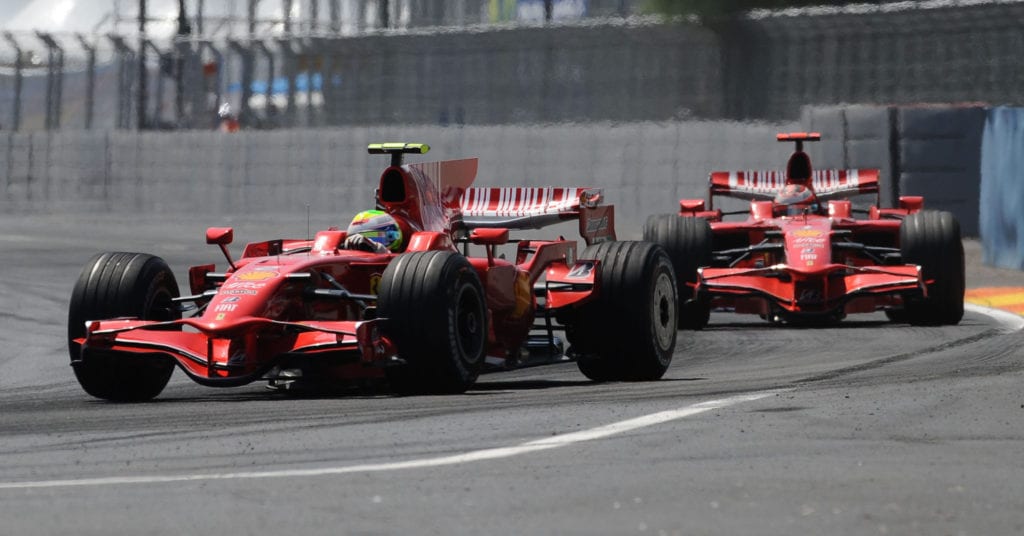