Adrian Newey is one of the most accomplished designers on the grid. His cars have an almost symbiotic relationship with success and whilst his modesty reminds us that he works with a large number of technical personnel, his directive seems to be a constant for various Formula 1 teams. Here are six cars designed by Adrian Newey that are the among most innovative and successful seen on a race track.

Aside from a brief stint at Fittipaldi, Adrian Newey’s career took off not in F1, but in sportscar and IndyCar with March Engineering. After working as a race engineer for the company he turned to design and his first creation, the March GTP sportscar, ended up winning two consecutive titles.

This prompted a door to open into more significant projects within the March motorsport empire, and eventually led to the design of the March 85C. This model would go on to win the 1985 CART title and also the Indy 500 in the same year as rival marque Lola only won two races all season.

The following year’s 86C was also a title winner. These successes were a sign of things to come and transferred Newey’s status from race engineer to designer.

Not just one of Newey’s best designs, but also one of the most iconic cars in F1 history, the FW14B dominated the 1992 season and the FW14 and FW14B won a combined 17 races and secured 21 pole positions.

The increased downforce generated by the FW14B was well suited to Nigel Mansell’s aggressive driving style and the innovative active suspension technology on the car created a scenario of complete dominance. This was realised at its maximum during qualifying for the British Grand Prix. Mansell registered a lap time that was two seconds quicker than his teammate Ricardo Patrese, who in turn was a second quicker than Ayrton Senna in the McLaren.

Newey’s switch from Williams to McLaren had occurred in 1997, but his first fully integrated design for McLaren came in 1998 with the championship-winning MP4/13. There had been some drastic regulation changes, namely much tighter aerodynamic specifications and the introduction of grooved tyres and it was clear early on that Newey had interpreted these changes more efficiently than others.

Even though the FIA had prevented the MP4/13 from having the advantageous second brake pedal that had been found on its predecessor, the 1998 McLaren emerged as a dominant car in the opening race. Mika Hakkinen and David Coulthard finished 1-2 having lapped the entire field.

Coulthard revealed that the car felt like it was understeering in slow corners and this was because Newey had designed a car in which aerodynamic grip superceded mechanical grip. Whilst Ferrari did get closer as the season progressed McLaren secured both titles, and the promise that many had seen in Mika Hakkinen when he’d out-qualified Ayrton Senna on his McLaren debut in 1993 was finally realised.

The predecessor to this car, the RB5, was Red Bull’s biggest step forward in terms of performance and the team emerged as the only consistent rival to the incredible Brawn BGP001. The arrival at the sharp end of the grid in 2009 foreshadowed what was to come – a micro-era of Red Bull dominance.

The RB6 secured the teams first constructors’ title at the Brazilian GP, a remarkable feat given that it was only its sixth year in F1. Adrian Newey became the first designer to oversee constructor titles with three different teams, but the drivers’ championship was still up for grabs with a record four drivers in contention heading into the finale at Abu Dhabi.

After Fernando Alonso got his Ferrari stuck behind the very wide Renault of Vitaly Petrov in the lower reaches of the points positions, the mathematical opportunity for Vettel to clinch the title presented itself. Vettel won the race and found himself at the top of the standings for the first time all year at the point in the season in which it mattered the most, securing an emotional victory and becoming the youngest ever champion.

The RB7 continued the upward curve of performance that the team had experienced in recent years. Where the RB5 had secured victories and the RB6 had narrowly claimed Red Bull’s first ever titles, the RB7 was the first Newey-designed Red Bull to dominate the championship.

The key to the success of the RB7 rested in its exhaust system, which fed hot air into the diffuser even when the drivers weren’t on the throttle. That meant that even whilst lifting through a corner, the diffuser generated downforce. The technology was featured on the RB6, but the RB7 drastically evolved the concept and led to a 2011 season in which the car only ever finished outside of the top five on two occasions. Vettel’s second title was much more straightforward with 11 victories over the campaign.

Unless regulations and wider automotive trends drastically change, the RB9 will go down in history as the last ever naturally aspirated V8 to win the title in F1, and Vettel’s “Hungry Heidi” was particularly dominant in 2013.

Adrian Newey admitted in pre-season that the development for the RB9 has been stalled as the team were forced to work on its predecessor to ensure that the RB8 secured both titles in 2012. This cast a slight doubt on the team in pre-season speculation, but after 19 races the car had won 13 times and secured 24 podiums, 11 pole positions, and 12 fastest laps.

The car didn’t start the season as strongly, but the development was rapid and at the hands of Vettel, the car was unbeatable after the Belgian Grand Prix as Vettel won nine races in a row. Newey conceded that most of the development had occurred at the rear end of the car in order to generate more downforce. The team was accused of several unfounded technical infringements throughout the year, including a flexible floor and traction control effects created from the KERS system. The FIA conducted further tests on the RB9 and didn’t find anything illegal.

Heading into the 2018 season, Newey’s latest design faces stiff competition from Mercedes and Ferrari, who have been a tier ahead of Red Bull in recent years. The RB13 improved drastically over the course of the 2017 season and shows that the design team was able to wrangle performance as the races flew by, but it feels like Red Bull needs to hit the ground running if it wishes to usurp the Silver Arrows and also compete with Ferrari.

Red Bull has hinted that Newey’s involvement on the design of the RB14 has been intense, and it’s worth noting that last year’s RB13 had little involvement from Newey, who opted to take a step back from last season. The odds of Red Bull showing a sharper turn of pace in 2018 are increased dramatically with his presence and as you can see, when Newey gets it right, his cars can be extremely tough to beat. 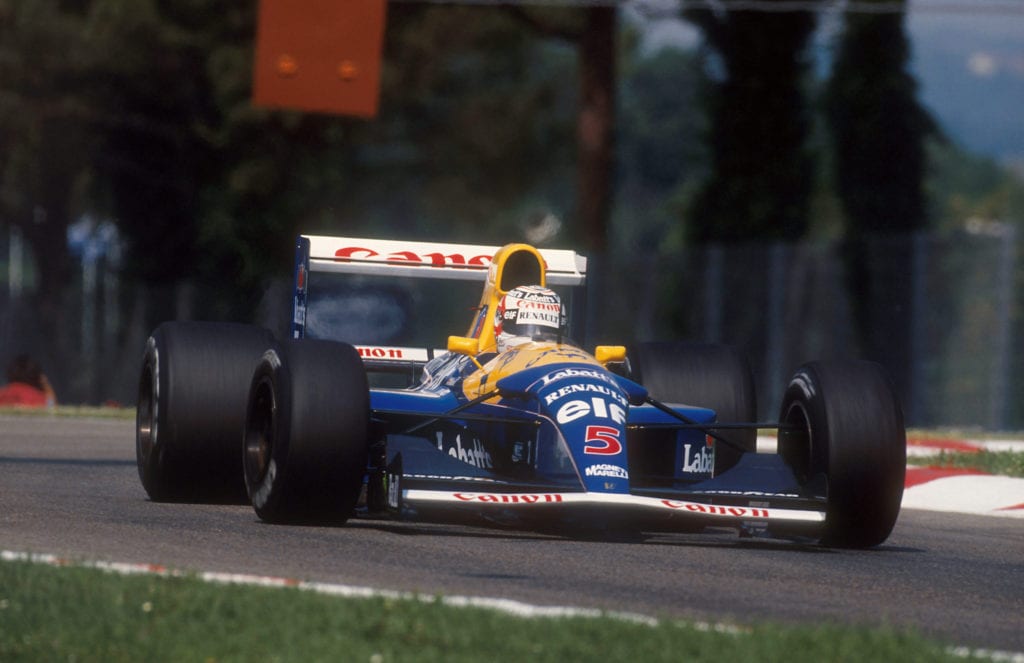