Quite often these took place on circuits that had already been given championship races but there were some that never quite made it to full World Championship status. Here are eight fantastic tracks which would have made great additions to any F1 championship calendar.

F1 cars raced at Oulton Park in the UK a number of times between 1954 and 1982, often competing for the ‘International Gold Cup’. It quickly became one of the most prestigious non-championship events and attracted many top drivers and teams.

Jim Clark, Jack Brabham, Jacky Ickx and many others can all count themselves as winners of the event. In 1961 the event was won by Stirling Moss in a Ferguson P99 – the only time a Formula 1 race has been won by a four-wheel drive car.

The track itself is a high-speed undulating trip through parkland, and has often been described as a ‘mini Nurburgring’. It even has it’s own banked hairpin!

Oulton Park still hosts plenty of high-level national championships, such as British F3, British GT and the British Touring Car Championship. Although some of the more dangerous sections have been neutered by chicanes it still remains one of the UKs best tracks.

From 1962 to 1965 the Enna-Pergusa circuit in Sicily hosted the Mediterranean Grand Prix…and it was a little bit bonkers.

Although the track is now littered with chicanes, back in the 60s it was literally just an oval-ish shaped road around the edge of a lake (which Mike Hailwood ended up crashing into in 1964).

The track was also really, really fast, since it was basically an oval. Despite being more than 50 years ago, drivers used to average almost 140mph across the whole race. 140mph! For comparison, that’s more than any Grand Prix in 2016 except for Monza.

Organisation at the circuit was notoriously bad. In 1992 Rubens Barrichello crashed into a recovery vehicle, splitting his helmet open, and then the ambulance he was going to the hospital in got involved in an accident. Oops.

Although the addition of the chicanes definitely slowed the racing down they didn’t exactly help to prevent incidents, as you can see from this F3000 race in 1998.

That would be the last high-profile single-seater race to take place at Enna-Pergusa. Today the track still hosts occasional GT and touring car races.

Kind of a mix between old Spa and the Nordschleife, the German road circuit of Solitude was mainly a bike circuit until it was widened in the late 1950s. This attracted car racing too and from 1961 to 1964 it held four non-championship F1 events, with crowds approaching 300,000 people not uncommon.

The track itself wound for over 11 kilometres through the forests on the outskirts of Stuttgart and had lots of long sections where cars were either going uphill or downhill. One of the main features of the circuit was a terrifying series of downhill S-bends that were almost flat out in the 1960s, and really separated the great drivers from the merely good.

In 1961 Innes Ireland beat Jo Bonnier by just a tenth of a second having passed him on the last lap. Dan Gurney won in ‘62, Jack Brabham in ‘63, and in 1964 Jim Clark mastered wet conditions to beat John Surtees, who had won there in 1960 on a bike.

In 1965 the track was closed and replaced with the permanent Hockenheim circuit down the just down the road. Although some bits of the Solitude circuit have been replaced the majority of it is still driveable today, and the Solitude Revival historic meeting takes place once a year to celebrate the great circuit.

Today the Pau Grand Prix is one of the most prestigious races a driver can win in junior formulae, but in the 50s and early 60s it was F1 cars that tackled the tricky street circuit.

Formula 2 and Formula 3000 continued to race there for decades, and today the European F3 championship has a round at Pau. The circuit layout itself amazingly hasn’t changed a bit in over 80 years – and there aren’t many tracks you can say that about!

It’s a pity that modern F1 tracks are all pretty much the same, isn’t it? All are roughly the same length and most of the newer ones have pretty similar layouts. That’s not necessarily a bad thing, but in the past tracks were so much more varied.

Even by the standards of the 1960s though, the Roskilde Ring in Denmark was way, way different. It was built in 1955 and was only 670 metres long, but two years later was extended to a whopping 1.38km. For comparison, the Indy circuit at Brands Hatch is almost 50 percent longer!

The track was literally built in a pit, had no real straights and the corners were banked. Because of that it made it great for spectators, who witnessed two non-championship Formula 1 races (called the ‘Danish Grand Prix’) in 1961 and 1962, won by Stirling Moss and Jack Brabham.

After that the track went back to hosting lower-level races before residents started to complain of the noise, and in 1968 the track was closed. Today it’s become a park and aside from a small sign commemorating it, you’d have no idea it was ever a race track at all.

F1 cars have raced all over the UK – after all, there are tons of circuits there – but you might not expect there to have been an F1 race right down in the south west peninsula of Cornwall.

But there was. In 1954 and 1955 the Davidstow airfield held three Formula 1 races, but amusingly no F1 cars actually turned up for either of the races in 1954. That said one of the races that year was won by a Lotus, which technically makes it the first F1 victory for the team. If you squint a bit, anyway. In 1955 however, an actual F1 car did turn up to race – a Connaught – and it won. That was the last race meeting held at Davidstow.

The track was amazing. Although it was on an airfield it was undulating and interesting, with some of the most difficult and fearsome corners in all of motor racing. Oh, who am I kidding, it was just another fairly boring flat airfield circuit. You can still drive it today though, but it’s very bumpy, and remember to watch out for sheep.

No, the real reason I’ve included it in a list of awesome tracks for the selfish reason that I grew up not far from this track. I had no idea of its history until I stumbled across it a few years ago. A former F1 circuit! Right on my doorstep! Who’d have thought it?

So no, the track itself isn’t particularly awesome. But I grew up loving Formula 1, and living in Cornwall meant that it felt like it was a whole world away for me. So to discover that the bumpy old airfield on a remote bit of moorland a few minutes drive from where I live not only had a motorsport history, but a (tenuous) Formula 1 history? That makes it pretty damn awesome to me.

If you think you live miles away from anything to do with motorsport, do a little bit of research and you might just be surprised… 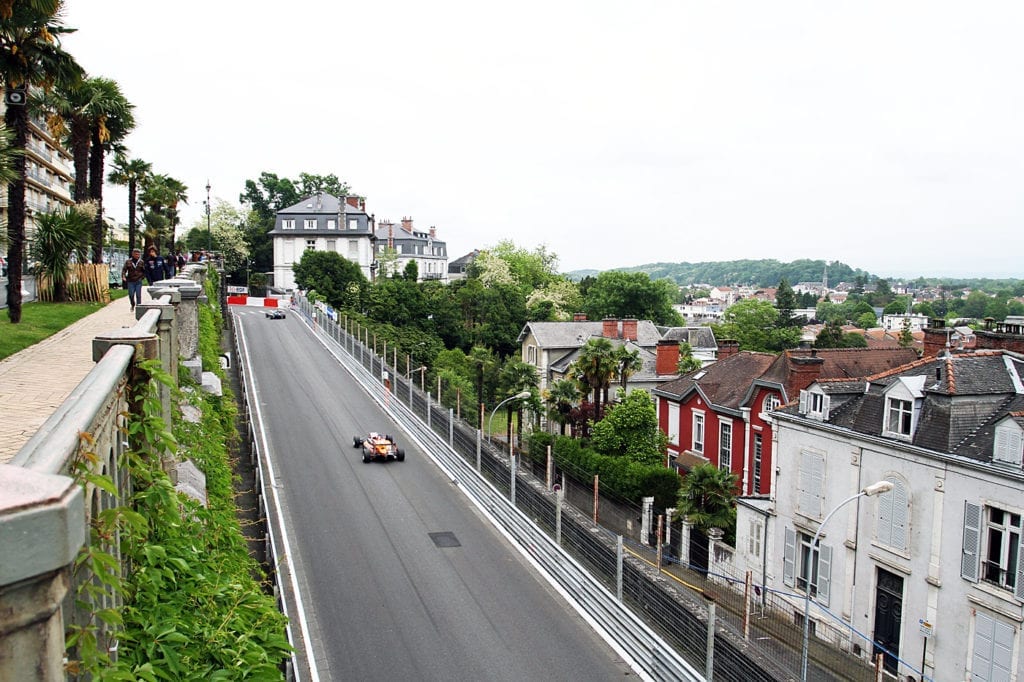