Did you know the likes of Sebastian Vettel and Felipe Massa started their F1 careers through the Sauber F1 Team? In this feature, we look back at the all-star drivers who were given their first F1 opportunity through the Swiss-based team.

That’s right. The four-time world champion made his F1 debut with BMW Sauber at the 2007 United States Grand Prix.

Vettel was promoted to the role of third driver with the team midway through the 2006 season after Robert Kubica was moved up to a full-time race seat to replace Jacques Villeneuve.

During his time at BMW Sauber, Vettel certainly made big impressions by setting the fastest time in practice on his testing debut at the 2006 Turkish Grand Prix. He was also the then-youngest driver to compete in an F1 weekend at the age of 19 years and 53 days and managed to pick up a £500 fine just NINE SECONDS after leaving the pit box. This was a record for a driver starting their F1 career and happened when Seb exceeded the pit lane speed limit on the way to the track. Whoops.

“In the first session I forgot to press the pit lane speed limiter, which is going to be expensive,” he said after the day’s running had come to an end.

After Kubica suffered a big crash at the 2007 Canadian Grand Prix, Vettel was called up to replace him and made his official F1 debut. He qualified well in 7th and finished the race in 8th position – becoming the then-youngest driver to score an F1 championship point.

Just three races later, Vettel was released from his contract with BMW Sauber and allowed to race full-time with Toro Rosso replacing Scott Speed. The rest is history.

After his impressive performance in junior categories, Peter Sauber offered Kimi a test with the team in 2000. Held at the Mugello circuit, Raikkonen didn’t hang about and by the second day of testing was half a second quicker than Sauber’s existing F1 driver Pedro Diniz.

The test, which was held just two days after the 2000 Italian Grand Prix at Monza, was unusual for many reasons. Firstly, gambling an expensive three-day testing opportunity on this young and relatively unknown Finnish driver was a significant risk, mostly as just a year before Raikkonen’s test, he was still only karting.

After such a stunning first impression, and further tests in Barcelona and Jerez that year, Kimi was signed to Sauber for the 2001 season. Then-FIA President Max Mosley voiced his concern about granting a Super Licence to someone so young and inexperienced but he was nonetheless given the FIA document.

During his debut year, the ‘Iceman’ as he is affectionately known as, managed to secure four top-ten finishes, including a sixth-place result at his first race at the 2001 Australian Grand Prix.

Raikkonen made the jump to McLaren for the 2002 F1 season.

After Raikkonen’s departure to McLaren, Sauber brought in a new Brazilian rookie to replace him and partner Nick Heidfeld. Although many mistakes on-track slightly overshadowed his first season, Massa managed to collect four championship points over the year.

One particular incident involving Massa and Pedro de la Rosa during the 2002 Italian Grand Prix resulted in Sauber suspending Massa the following race for his actions. It’s understood that the suspension, plus a series of disappointing results lead to Sauber dropping Massa for the 2003 season.

Massa joined Sauber’s engine suppliers, Ferrari, for the 2003 season as a test driver, before making the return to a full-time race seat with Sauber from 2004 until the end of 2005.

Sauber veteran Nick Heidfeld departed at the end of 2010, allowing another newbie to race for the team in 2011. The fifth Mexican to compete in F1, Sergio Perez, caught people’s attention when he joined F1 and finished seventh in his debut race. He was the only driver on the grid to finish the race with a one-stop-strategy, but both Sauber’s were disqualified post-race for a technical infringement.

He struggled with bad luck and wrestled with making his way up the field in the following races, however, a big crash at the 2011 Monaco Grand Prix saw him miss the next two races due to the heavy impact and subsequent concussion and spraining to his thigh.

Perez returned from injury for the 2011 European Grand Prix and scored many points throughout the season, with it later confirmed that Perez would remain with Sauber for 2012.

In just the second race of 2012, at the Malaysian Grand Prix, Perez delivered an absolute masterclass and almost took the win from Fernando Alonso in a crazy race affected by heavy rain. He finished second, the team’s best result since Kubica at the 2009 Brazilian Grand Prix. Throughout the 2012 season, Perez would earn himself a trio of podium results.

Checo joined McLaren for the 2013 season.

Leclerc tested with Sauber during the 2017 season, before getting the promotion to a race seat the following year after winning the F2 drivers’ title. Charles became the second-ever Monegasque driver to enter F1 and score championship points after finishing the 2018 Azerbaijan Grand Prix in sixth.

He continued to demonstrate his enormous potential for the newly-rebranded Alfa Romeo Sauber F1 Team, with a total of ten point-scoring results over his rookie season. Leclerc was given the call up to Ferrari after just a year in F1 and joined the team from the 2019 season. He’s now signed to the Maranello-based squad until the end of 2024.

Kubica has been a name that has popped up many times over this article, and for a good reason. He stayed with the team for four seasons from 2006 up until 2009 and had many highs and lows with Sauber.

In 2006, Kubica was made Sauber’s official reserve driver. His impressive results in the Friday practice sessions led many to think he would be replacing Jacques Villeneuve at the team within a matter of time.

His debut came earlier than expected, as Villeneuve announced he would miss the 2006 Hungarian Grand Prix as he was still feeling unwell after a crash at the prior German Grand Prix. Kubica got the call-up, becoming the first-ever Polish driver in F1, and would remain in this role as Villeneuve never returned to racing. Kubica achieved a third-place finish in just his third F1 race.

In 2007, Kubica started his first full season as a driver with Sauber. The year started with some great results but came to a sudden halt after a horrendous crash at the Canadian Grand Prix. He missed the following race to recover and returned to racing by securing a fourth-place finish at the 2007 French Grand Prix. Not bad.

Over the next three seasons, Kubica distinguished himself as a considerable talent with a bright future ahead of him. He took his only F1 win at the 2008 Canadian Grand Prix – one year on from an accident that could have ended his career – and achieved another seven podium finishes with Sauber before his move to Renault for the 2010 season. 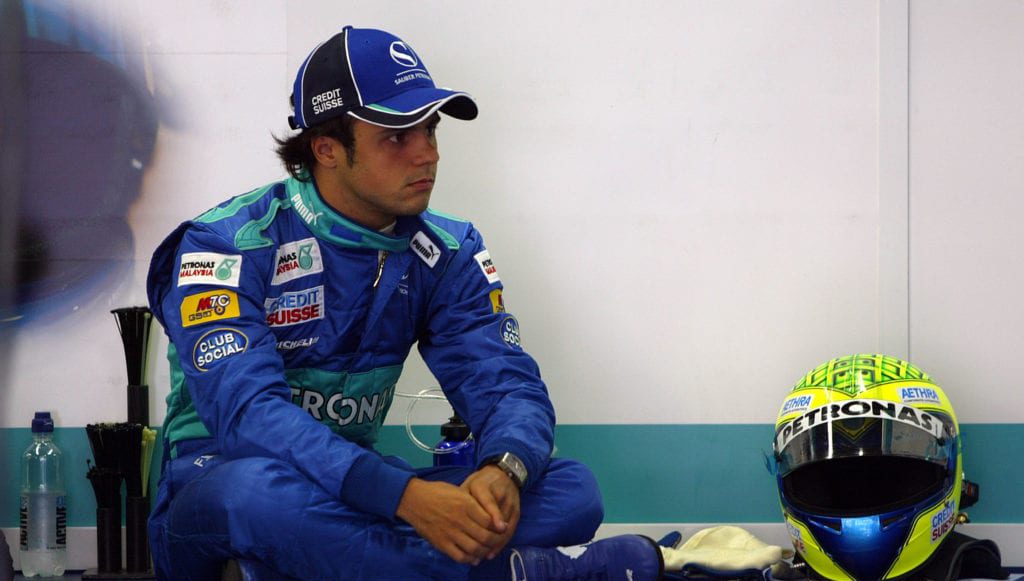