6 Of The Best Ever Williams Liveries

With Williams set to launch its 2018 contender soon the eyes will not only be on how the Halo looks, but also whether we get the same Martini livery the team has sported since 2014. Whilst some new sponsors could mean a slightly different colour scheme another pearly white rendition is expected, so lets look back at some of the Williams liveries that have caught the eye over the years.

The iconic Rothmans livery on the FW16. Driven by Ayrton Senna and Damon Hill in 1994, the car was difficult to drive early in the season, but would eventually develop into a race winner. Whilst the year was dampened by Ayrton Senna’s death at Imola, the team persevered to secure the constructors’ title.

The Cosworth-powered FW28 showed signs of real promise at the first race of the 2006 season in Bahrain. Rookie and reigning GP2 champion Nico Rosberg stunned on his F1 debut with the fastest lap of the race and a double points finish with Mark Webber suggested that the car was going to be competitive.

But the opening race proved to be a false dawn as reliability issues plagued the car, contributing to a whopping 20 retirements over the campaign. Still, whether setting a fast lap early on or stationary at the side of a track drowning in the scent of burning electronics, the livery of the FW28 is very striking. The RBS livery is the deep blue that we link with Williams, and the car is definitely not offensive to look at in a pre-2008 financial crash context.

Sometimes the simpler liveries are the best. It is largely white, which is a bit dull, but the use of blue and yellow around the cockpit visually emphasises the driver at the wheel. The FW10 was also a race winner, with Nigel Mansell and Keke Rosberg picking up two victories each in 1985. This was also the first Williams car that used a carbon-composite monocoque rather than the heavier aluminium honeycomb.

‘B-but the Italian cars are supposed to be the red cars!?’ In 1998, the red-liveried Williams FW20 was designed to defend Jacques Villeneuve’s 1997 title. Whilst the car was competitive enough for podiums, it was no match for McLaren or Ferrari and the team finished a very distant third in the constructors’ championship. This was partly due to Adrian Newey’s 1996 switch to McLaren; he had been a key factor in the team’s edge throughout the decause and whilst he’d had enough time to influence the 1997 car, the red Williams was devoid of Newey’s input.

The drastic shift in colour was due to the chief sponsor and cigarette company Rothmans opting to promote its Winfield cigarette brand, meaning that the iconic white and blue livery was switched for red. It shows that Williams are prone to accommodating the wishes of their main sponsor, but we don’t think Martini are releasing an alcoholic cherryade product in 2018, so the red Williams is unlikely to reappear.

Even if Pastor Maldonado hadn’t stunned the racing world with his victory at the 2012 Spanish Grand Prix, the livery of the FW34 would have assisted the car in standing the test of time. It’s a really classy, clean design, and makes us miss blue Williams cars quite a bit. For how much longer will the FW34 be the last race-winning Williams?

The FW15C was the successor to the infamous, active suspension-wearing, Nigel Mansell-containing FW14B from 1992. This new car for the 1993 season came in two slightly varying tubs because of the height difference between Damon Hill and Alain Prost.

Co-created by Patrick Head and Adrian Newey, the FW15C had 12 per cent more aerodynamic performance than its predecessor and also a possessed a new toy known as the ABS braking system. The car secured 10 victories over the campaign and wrapped up the fourth and final title for Alain Prost, as well as the constructors’ title for Williams. The livery speaks for itself and is emblematic of a golden engineering era for the team. 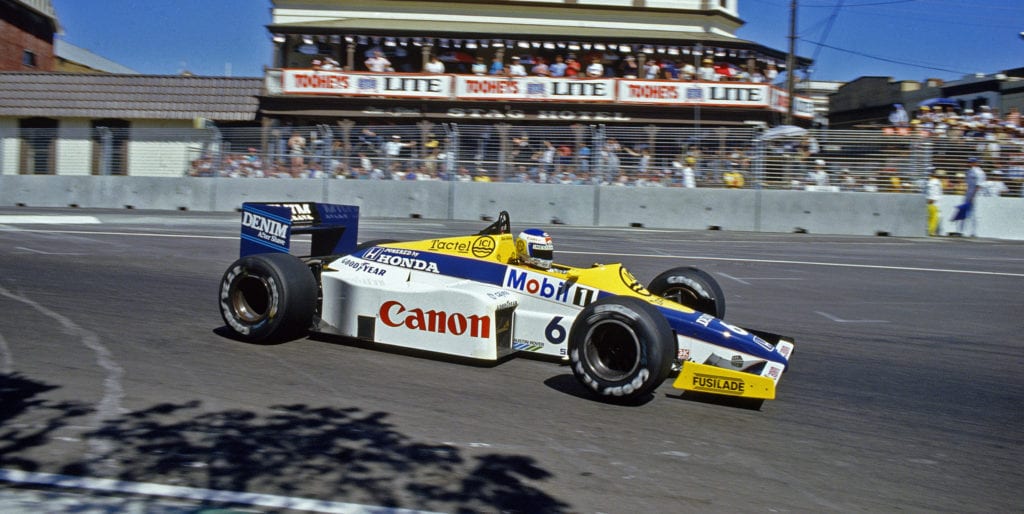