6 Of The Most Memorable Australian Grands Prix

The Australian Grand Prix weekend is always satisfying for the fans. When it’s first on the calendar, it kicks off the season and rides the wave of anticipation that has been building over the winter. Pecking order estimations are tested, and the true pace between teams is finally realised. When it was held at Adelaide as the final round, it saw some of the most dramatic title deciders of all-time.

But there are some races that stand out from the rest. There have been some intense fights around both Albert Park and the Adelaide, where the race used to be held. Leading up to the 2018 race, let’s recap some of the most dramatic F1 races on Aussie soil.

The 16th and final race of 1986 saw a three-way tussle for the title. The Williams drivers of Nigel Mansell and Nelson Piquet were both in contention, as was McLaren’s Alain Prost.

Mansell took pole, but made a poor start and fell down the order to third. He was in the middle of a classic Mansell fightback when one of his tyres famously exploded with 19 laps to go. This left Piquet in a position to take the title, but because his teammate had suffered tyre failure (as had leader Keke Rosberg just a lap before Mansell), Williams was forced into making an extra precautionary pit stop for Piquet. That gave Prost a healthy lead and whilst Piquet’s pace after his stop was rapid, he ran out of laps and ended the race 4.2 seconds behind Prost, giving the Frenchman his second of four titles.

Remember the eruption of controversy last season when Sebastian Vettel thought Lewis Hamilton had brake tested him behind the safety car in Baku and decided to pull up alongside him and give him a whack? The move saw the Ferrari driver rightly scrutinised and it didn’t help his title bid, either. Imagine something of this nature happening at the final race of the season between the only two drivers in contention for the title.

That’s pretty much what happened at the 1994 Australian Grand Prix. Benetton’s Michael Schumacher went into the final weekend of the season leading the championship, with only one other driver in contention. That was Damon Hill in the Williams, who was only a single point adrift of Schumacher’s tally heading into the weekend.

Hill’s teammate Mansell was on pole, but Schumacher and Hill overtook him at the start, and it was the two title contenders fighting for the lead up until lap 36. Schumacher hit a wall at the tight East Terrace corner of the Adelaide street layout, undoubtedly an error caused by the pressure being put on by Hill. Schumacher’s car was damaged from the impact but was a manoeuvrable wreckage. Hill hadn’t seen the off and tried to pass at the next corner. Schumacher veered across the track as Hill entered the corner, taking his rival out and ending the title fight in favour of the German in one swift move.

The race is remembered for this championship defining collision, but it also marked Nigel Mansell’s 31st and final victory in F1.

The 1996 race around Albert Park saw one of the most impressive debuts in recent history. Jacques Villeneuve entered his first F1 weekend as the reigning IndyCar champion, and boy did the Canadian deliver. Securing pole on the Saturday saw the F1 newbie beat his highly-rated teammate Damon Hill. Williams was clearly at the top of the pecking order, Villeneuve’s pole lap time half-a-second up on the best placed Ferrari of Eddie Irvine, who would start the race from third.

Car advantages aside, the fact that a rookie beat Hill to pole and then went on to lead and manage most of the race was beyond impressive. But the fairytale beginning to Villeneuve’s F1 career came crashing back to Earth in the closing stages when an oil leak meant he would have to go into damage limitation mode. Hill overtook him for the race lead with just a few laps to go, but the pace the young Canadian had shown earlier the race prevented him from falling further down the order, and he still finished in second for a Williams 1-2.

The race is also remembered for Martin Brundle’s spectacular crash in the Jordan, which was split in half when it executed a barrel-roll over the unsuspecting McLaren of David Coulthard and Johnny Herbert’s Sauber. The British driver was lucky to emerge from the crash without a scratch, and was cheered the moment he emerged from the wreckage and tried to get back to the pits to jump into the spare car.

Remembered for that huge collision at the start of the race, but also a great underdog story that witnessed an uncompetitive Minardi at the hands of an Aussie debutant secure an unlikely points finish to the admiration of the locals.

The crash at the start of the race, initiated by Ralf Schumacher and Rubens Barrichello, ended up with eight cars out of the race instantly. Michael Schumacher won from Juan Pablo Montoya and Kimi Raikkonen, but the real story of the race took place behind the leaders.

Mark Webber had put his Minardi an impressive 18th in qualifying, ahead of both Jaguars, and was up the order in the race having navigated the chaotic start. He went on to finish a stunning fifth and score the first points for Minardi in almost three years.

There are a few often forgotten details of Webber’s race which only enhance his achievement. He had the pressure of only being on a three-race contract – had he been wiped out on lap one, who knows whether he’d have done many more? And what’s harder than finishing fifth in a Minardi at the Australian GP? Finishing fifth at the Australian GP in a Minardi with a broken differential. Still, he somehow fended off the experienced Mika Salo in the much quicker Toyota, and his compatriots surrounding the circuit soaked up the unlikely result. It was a great day for Australians, underdogs and Webber, who had somehow managed to personify Aussie grit in his first ever grand prix.

The race started in wet conditions with Sebastian Vettel on pole and Mark Webber completing a front-row lockout for Red Bull. Fernando Alonso was third for Ferrari, with Jenson Button fourth, Felipe Massa’s Ferrari fifth, and then the new Mercedes cars of Nico Rosberg and Michael Schumacher rounding out the top seven. This order was scrambled going into the first corner, with one side of the track notably dryer than the other. Button clipped Alonso, causing the Ferrari driver to spin out to the back of the grid and collect Schumacher’s Mercedes for good measure.

Whilst all of this was happening, Vettel was quietly pulling away in the Red Bull, the signature of many years to come. Following an early safety car, Lewis Hamilton (who started 11th after traffic in qualifying) found himself overtaking Button for sixth place a few laps later.

Maybe it was watching his teammate overtake that led to Button making an early call for slicks. It didn’t look promising in the immediate moments following the tyre change, the Brit losing the car in a puddle at turn three, but as the race went on and a dry line developed, it was clear that Button was in the best position.

Disaster struck leader Vettel on lap 26, with brake failure causing him to spin out and retire. That promoted Button into the lead of the race with Robert Kubica in second place, where they remained until the end, with Massa rounding out the podium.

As well as being the first race of the hybrid era, the 2014 season opener was also Daniel Ricciardo’s first race for Red Bull, having earned promotion from Toro Rosso. This race would, like 2002, see an Aussie driver wow the local crowd, but this time it would ultimately end in post-race controversy.

In wet qualifying conditions, Hamilton usurped Ricciardo for pole on his final run, and Mercedes was well placed with Rosberg sitting in third behind the Red Bull debutant. It was Rosberg who had the best start and would lead the entire race, but the battle behind him kept the race interesting. Two big names were out after three laps as Hamilton and Vettel suffered engine problems, the new hybrid power units very much suffering teething issues. It meant that Ricciardo was in a race with the McLarens of Button and newcomer Kevin Magnussen.

Ricciardo absorbed pressure from the chasing Dane and secured his first ever podium on home soil, only for it to be taken away from him after the race. Ricciardo’s RB10 had exceeded the legal fuel flow limit and he was disqualified from the result. It promoted Magnussen to second and Button to third, proving us with something of a false dawn for McLaren – to date, it’s the team’s most recent podium…

What are some of your favourite Australian Grands Prix? Let us know in the comments. 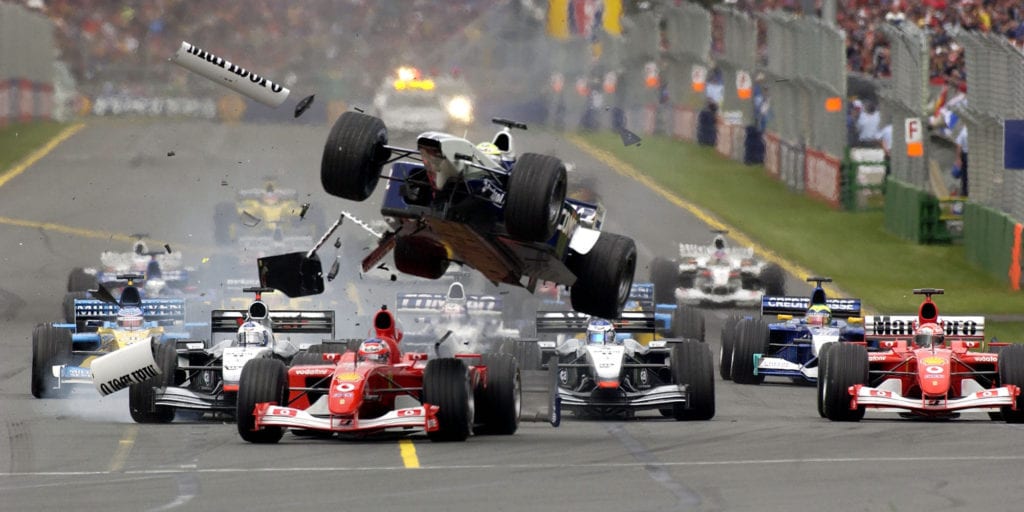