6 Races To Go: A Decade Of Title Fight Comparisons

Sebastian Vettel is quickly running out of races to catch Lewis Hamilton in the fight for five titles. As the 2018 season enters its final six races, we decided to look at the points deficits and results of the final six races from each of the previous 10 F1 seasons to try and draw a better picture in terms of what could happen next in this tense title fight between two greats.

With six races to go, the title fight was once again between the Mercedes of Lewis Hamilton and the Ferrari of Sebastian Vettel. Despite the sense that these drivers have been a bit closer this season, the points gap between Hamilton and Vettel was actually smaller at this point last season. Heading to Malaysia, Hamilton had 263 points against Vettel’s 235, a margin of 28 points separated the duo with six races remaining.

Hamilton outperformed Vettel in this time frame, picking up another 100 points to Vettel’s 82, meaning that by the end of the year, Hamilton took the title by 46 points.

The year that Nico Rosberg pipped Hamilton to the title. The form of Valtteri Bottas in recent years has elevated the awareness around how good Nico actually was, and in 2016 was a tight title fight even at the point in which there were six races remaining. Before Malaysia, Rosberg had accrued 273 points against Hamilton’s 265. This gap reduced in the six races that followed, with Lewis claiming 115 points against Rosberg’s 112. It meant that Rosberg would secure the title with 385 points against Hamilton’s 380. The Brit’s retirement from the lead of the Malaysian Grand Prix was a major factor in the outcome in a year in which Rosberg stepped up his game.

The 2015 season was another battle between Hamilton and Rosberg, but this time the one retirement in the final six races between these two contenders for the title would fall on Nico’s side of the garage. Heading to Japan, Hamilton had a 41 point lead over his teammate and rival. Three wins and three second places later, Hamilton claimed his third title and was able to extend the gap in the standings to 59 points. Rosberg’s retirement in Russia allowed this gap to grow and is the only reason Mercedes didn’t complete six back-to-back one-two finishes in the final races.

The first year of Mercedes dominance in the hybrid era and Hamilton’s first title with the Silver Arrows. In the final six races of the 2014 season, Hamilton was almost faultless, picking up five victories, he was only outscored by Rosberg once in this window, at the Brazilian Grand Prix in which Nico led a Mercedes one-two.

Heading to Singapore with six races to go, the title fight was poised to go the distance with Hamilton only edging Rosberg by three points. Rosberg’s retirement in Singapore and the painful 14th place he had to limp home with at the double-points finale in Abu Dhabi saw the gap extend to 67 points come the end of the year – with standard points, the gap would have been 42.

2013 shows the most convincing title-runaway on this list and not only serves as motivation for Vettel, but is also something that he has admitted he must do in order to beat Hamilton this season. In 2013, Vettel had a comfortable 60-point cushion to the Ferrari of Fernando Alonso with six races to go. This points gap increased race after race with Vettel picking up a maximum 150 points with six back-to-back wins, extending the total streak to nine. Alonso scored just over a third of this tally in his final six races of the year, ending the season on 242 points.

2012 is how far back we have to go to find an instance in which the driver in second place with six races to go went on to win the championship.

Before the Japanese GP, Alonso had 194 points against Vettel’s 165 points. In the final six races, Vettel turned a 29-point deficit into a three-point lead. The German’s hopes were drastically slashed at the opening of the season finale in Brazil, with his Red Bull facing the wrong way and dead last before the first lap had been completed. Alonso finished that race in second place, but Vettel spectacularly recovered for sixth, enough to win him his third title.

In 2011, Sebastian Vettel secured his second title with relative ease. With six races left on the calendar, he had a strong 107-point advantage over eventual runner-up Jenson Button. The Brit was on form in the final stretch and was on the podium for every race barring Korea, in which he came home fourth. But Vettel cruised to the title, outscoring Button in four of the final six races and extending the points gap to a remarkable 122 points by the end of the year.

There were four drivers in contention for the title by the time the season finale at Abu Dhabi arrived. With six races to go, Hamilton was on 182 points against eventual champion Vettel’s 151. In the six races that followed, Vettel scored 105 points whilst Hamilton scored just 56 after crashing out in Italy and Singapore. Alonso actually scored more than either driver in the final six races with 111 points, but his frustrating seventh place in Abu Dhabi saw Vettel take the championship lead for the first time all season – and with it his maiden championship.

The final year of the old 10-8-6-5-4-3-2-1 points system for the top eight finishers. 2009 was largely characterised by the fairytale season of Brawn GP – you probably remember the striking highlighter yellow trimmed cars dominating, right? This didn’t prevent a hungry Sebastian Vettel from closing the gap to Button in the final six races. Prior to the Belgian Grand Prix, Button had 72 points against Vettel’s 47; the German picked up 37-points in the final six races whilst Button picked up 23. Vettel did all of the winning out of these two in this period, but Button’s string of early-season wins was enough to secure the title at the penultimate round in Brazil His final tally of 95-points saw an 11-point gap to second-placed Vettel.

Is that Glock? We all know how close the 2008 title was, and that an overtake on the last lap of the final race of the season at Interlagos defined the championship. Felipe Massa had to settle for second place, but he actually outscored Hamilton in the final six races. Prior to this phase of the season, Hamilton was on 70-points against Felipe’s 64. The Brazilian scored five more points than Hamilton in this window but ended up being a single point shy of Hamilton’s final tally.

In conclusion, there have only been two occasions in which a points deficit has been overturned in the final six races in the last decade of Formula 1. In 2012 when Vettel overturned a 29-point deficit into a three-point lead, and in 2010 when Vettel turned a 31-point deficit to Hamilton into a 16-point lead (Alonso and Webber ended up beating Hamilton, too).

You get a third instance if you go back another year to 2007 and adjust the figures to the current points system, Kimi’s deficit of two race victories would be 50 points today. This means that the 40-point deficit that Vettel needs to make up for in the remaining six races of this season falls within the bracket of what has been overturned in the past decade or so – not easily, mind you, but it is possible.

It’s also worth noting that in these two instances of a championship deficit being overturned, the championship leader has retired on at least one occasion in the final six races. The odds are clearly stacked in Hamilton’s favour, and Vettel has admitted that he must emulate his 2013 record of winning every one of the final six races to overturn his fortunes. But the point has to be that advantages at this stage have been overturned in recent history (by Vettel himself1) and it isn’t over just yet. 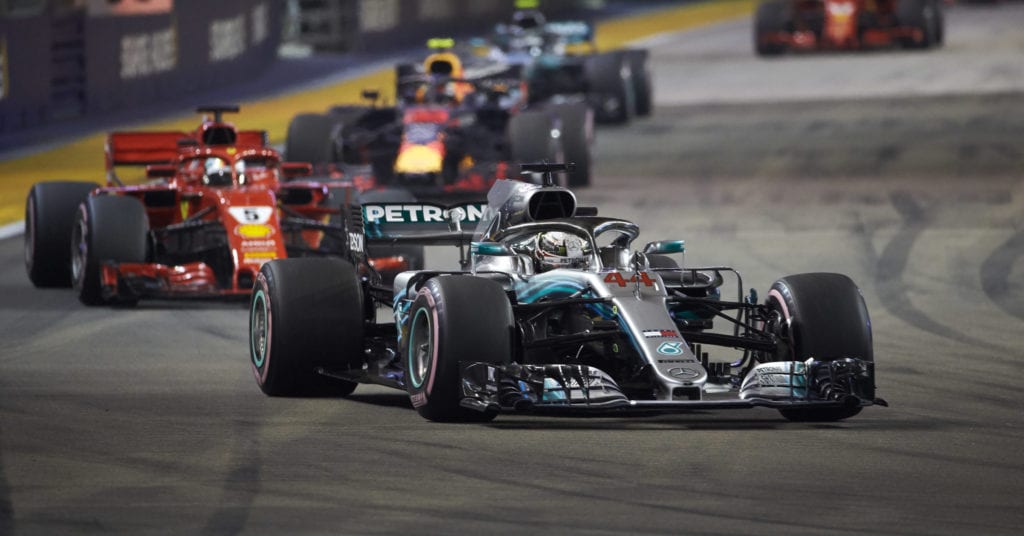