It didn’t take long for Max to exceed his father’s achievements in F1, but that’s not to say that Jos wasn’t a good driver. After a short but successful junior career, 22-year-old Verstappen was signed as a test driver for Benetton, which became an unexpected race seat when regular driver JJ Lehto broke his back in pre-season testing.

He shared the seat with Lehto and Johnny Herbert during the year – which, with Michael Schumacher as his teammate, was never going to be an easy task. Things didn’t go brilliantly, putting his F1 career on something of the back foot and dooming him to race in the midfield for most of the rest of his career. Although perhaps he lacked the proper application and commitment needed to be a top F1 driver, throughout his career he often showed that he certainly had the natural talent – and plenty of it. Here are six races where ‘Jos the Boss’ showed his class.

Verstappen was retained as Benetton’s test driver for 1995, but loaned to race seat with the tiny Simtek team. Despite being something of a backmarker team, Verstappen was able to impress almost from the word go. At the second race of the year in Argentina he qualified a very impressive 14th in the wet (the team had never previously managed a top 20 in qualifying), but went even better during the dry race and was up to an incredible sixth after 17 laps. A first points-score for the team looked like a real possibility but sadly, Verstappen dropped back after a very slow pitstop and then retired with gearbox failure.

After that year’s Monaco GP Simtek went bust, denying Verstappen further chances to prove himself that year – although he’d impressed in his short time with the team.

Jos joined the Footwork Arrows team for 1996 and continued to perform well. In the Brazilian Grand Prix he was sensational in the early stages, leaping from 13th on the grid up to seventh and was, at that stage, the fastest driver on the track. Unfortunately, he was once again let down by the car as his engine failed after just 19 laps.

1996 proved to be a bittersweet year for Jos. He continued to show immense speed – in Argentina he out-qualified both McLarens to take seventh on the grid and finished a strong sixth – but he also made quite a few mistakes. This was most costly in the soaking wet Spanish Grand Prix. He was one of the fastest drivers in the race, setting the third fastest lap, and he was chasing down Heinz-Harald Frentzen for fourth in the closing stages when he spun out.

The worst moment was at Spa, where a stuck throttle caused an absolutely enormous accident coming out of Stavelot, leaving him with a persistent neck injury.

Despite his impressive performances for Arrows in 1996 the sudden availability of Damon Hill left Verstappen without his seat, and he joined the waning Tyrrell team for 1997. As the V10 era truly took hold, Tyrrell was hamstrung with old Ford V8 engines and spent much of the year jostling with Minardi at the back. Verstappen had some promising races, though, and the Canadian GP was one of them.

By this stage of his career, Jos had gained a reputation for being good at starts (in 1996 he gained places on the opening lap in every race but one) and in Montreal shot up from a season-best grid slot of 14th to 10th by the end of the first lap. Despite having a power disadvantage on a power circuit he continued to make places, making an aggressive pass on Rubens Barrichello which included a bit of chicane-cutting and would probably be an insta-penalty nowadays. By lap 15, Jos was up to sixth. He looked set for a sensational result, but bad luck struck again and he retired with gearbox trouble.

After half a season with Stewart in 1998 (as the replacement for the underperforming Jan Magnussen) and a year out testing for the stillborn Honda F1 team project, Jos was back with a full-time race seat in 2000, driving the gorgeous Orange Arrows.

It was a competitive package and Verstappen made the most of it in the wet Canadian Grand Prix, surging through the field late charge where he overtook several drivers. His pass on Alex Wurz was particularly ballsy, sticking two wheels on the grass (in the wet!) heading into Turn 1 and driving around the outside of the Benetton driver. A few laps later he passed Jarno Trulli to run fifth and this time, driver and car held together as Verstappen scored his first points in over four years.

Later in the year he made the most of the Arrows’ slippery aero to finish a strong fourth at Monza.

Verstappen was well known as a very handy wet-weather driver, but his performance in the 2001 Malaysian Grand Prix was something else. He went from 18th to sixth on the first lap – yup, just the 12 places gained – with a start so good that the stewards investigated him jumping it (he didn’t). Verstappen then took advantage of a sudden rainstorm to run as high as second at one point and was even catching David Coulthard for the lead.

However, as the track started to dry he couldn’t help but slip back to seventh by the end, but not without putting up a great fight against like likes of Schumacher, Mika Hakkinen, and Frentzen. It was an amazing performance in an uncompetitive car. Schumacher had nothing but praise for his former teammate in the press conference after the race, saying completely unprompted:

“We had intermediate tyres on compared to some drivers who had rain tyres on and I think that’s a bit of a difference [as to why Schumacher was faster than the others in the wet]. Although, I was behind Jos, and Jos… he was flying! I think on rain tyres he was basically the fastest car out there. I thought it would be a lot easier to overtake him but he was going very well and made it very difficult for me.”

The rest of the year was less sensational though. In the very next race, Jos crashed into Juan Pablo Montoya while being lapped, denying the Colombian rookie a sensational victory. Verstappen was replaced by Frentzen for 2002 and after one final season with Minardi in 2003, his F1 career was over.

Jos found a seat with Team Netherlands for the inaugural A1GP season in 2005/06. Although it was a fairly unremarkable season there was one massive highlight, when he won the feature race in South Africa at the Durban street track, passing Neel Jani for the lead on the final lap having started from the back. It was his first major win in motor racing for nearly 14 years.

That was his last year in single-seaters and he then made the switch to endurance racing, where he won the LMP2 class at Le Mans in 2008, as well as winning the LMP2 championship in the Le Mans Series.

Jos the Boss was far from being a great F1 driver. But on the right day, with the right car and, most importantly, with the right frame of mind, he was as talented as anyone – especially if there was a sprinkling of rain. 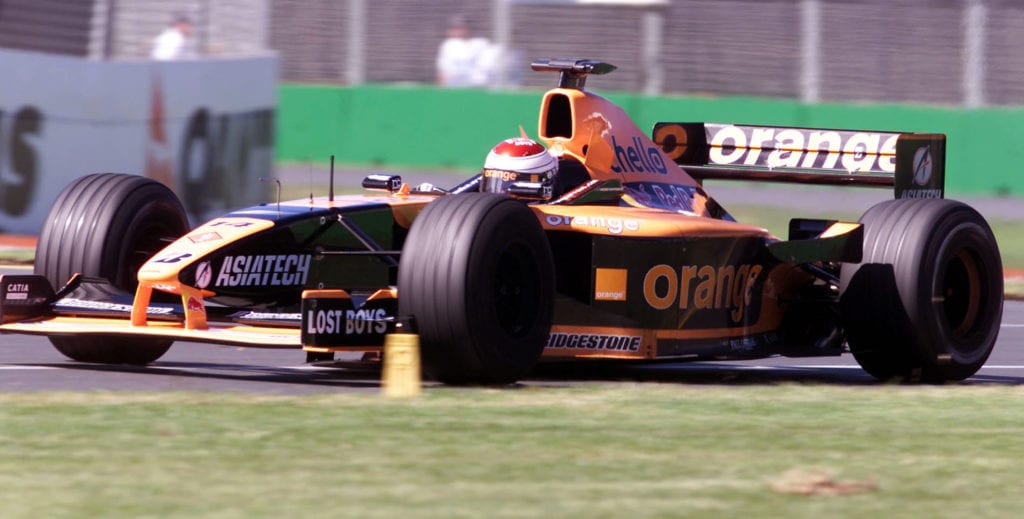