6 Reasons Why Keke Rosberg Was A Total Badass

Nico Rosberg may have been far more successful than his Dad, but it’s probably fair to say he hasn’t had as much of a cultural impact. Not that he’ll care of course, because very few people in the history of F1 can match Keke for coolness. Here are six reasons why Keke was such a badass.

It’s a shame we don’t really see drivers sporting a moustache these days, because on the right driver a bushy bouquet of hair on the upper lip can really be the icing the cake of coolness. For Keke it became iconic, really adding to his ‘give zero f**ks’ attitude.

Keke’s championship win in 1982 was the last for the legendary Cosworth DFV engines as turbos were becoming the thing to have. By 1983 they were well and truly outclassed, but at somewhere like Monaco the difference was much smaller and it allowed Keke to put in one of the truly great drives.

The track was wet at the start but drying, and while most of the front runners decided to play it safe with wet tyres Keke went for slicks in the hope it would dry out.

Keke made a monster of a start to go from sixth to second by turn one (at Monaco!) and by the end of the first lap had passed Prost’s Renault to take the lead. It only got better as the track dried, and after seven laps he already had a lead of almost half a minute.

From then on he mastered the track and the conditions, only losing time when lapping backmarkers (which he encountered as early as lap 10) and despite suffering from an illness all weekend which had put his ability to even finish the race in doubt.

You can almost pick any lap out at random and you’ll see him drifting his Williams around Massenet and Casino Square – spectacular, but totally in control. This virtuoso performance totally ended suggestions that he hadn’t deserved his 1982 championship. Street circuits would prove to be something of a speciality of his, with four of his five career wins coming on them.

The fastest ever lap

When Keke Rosberg qualified on pole for the 1985 British Grand Prix he did so with the fastest ever lap in F1, at an average speed of more than 160mph. The Silverstone circuit back then was much, much faster – even on the slowest part of the track (the Woodcote chicane) cars were still doing well over 120mph.

Rosberg had already set a pretty blistering time early on in Saturday’s qualifying session so spent much of it sitting in the pits with a cigarette. But with other drivers getting close to beating it, with a few minutes to go he strapped some fresh qualifying tyres on his Williams, whacked the turbo boost up and went out to do another lap.

It had started to rain and he had a slow puncture, but he put everything on the line with one of the most spectacular laps ever driven in an F1 car and somehow went even quicker than his previous lap.

Montoya may have beaten it with a pretty mega lap of his own at Monza in 2002, but it was done with none of the style or coolness of Keke’s lap in 1985.

Keke didn’t just look cool and drive like a badass, but he spoke like one too. At Dallas in 1984 the extremely hot weather had caused the track to break up during a support race and the F1 drivers were concerned about the same thing happening to them.

Some of them even tried to arrange a boycott of the race, but Rosberg was having none of it: “I don’t know what all the fuss is about, we’ll all complain and bind right up until the start time and then we’ll go out and race as usual.” he said. “We’ve come all this way and the race is all set up. Track surface or no track surface, you know as well as I do, we’ll race.”

The race was one of the hottest on record, the track did indeed break up and many drivers retired as a result. Who won? Keke of course!

In recent years Keke has chosen to stay out of the spotlight to let Nico forge his own career, but he still comes out with the goods when he needs to. After Schumacher blocked the track in qualifying for the 2006 Monaco Grand Prix Keke made his opinion on the act clear.

When asked about Michael’s antics, he said: “He should resign from the Grand Prix Drivers Association and never mention the word safety again. If he was a real man he would have parked the car in the middle of the road and walked away. We would have thought much better of him. It was the worst thing I have seen in Formula One. I thought he had grown up. He is a cheap cheat. He should leave F1 to honest people.”

Throughout his whole career Keke made a name for himself with his amazing car control, and even when he made a mistake it could be spectacular. His spin at the start of the 1983 US Grand Prix in Long Beach is the stuff of legends.

Everything about it is just awesome. From his powersliding, wheel-banging start to the incredible failed attempt at passing Tambay’s Ferrari, which amazingly only costs him one place.

It wasn’t a one-off either – he did pretty much exactly the same thing in Canada in 1985.

Lewis Hamilton may have come under fire for his ‘slowing down’ tactics in Abu Dhabi in 2016, but it’s got nothing on what Keke Rosberg did in the 1985 European Grand Prix at Brands Hatch.

After being shoved off the road by Senna, Rosberg lost a lap to the leaders after pitting for new tyres. He came back out in front of Senna and didn’t hesitate to badly hold up the Brazilian in the ultimate form of passive-aggressive revenge. The whole thing allowed his team-mate Nigel Mansell to take the lead and head off to his first win. 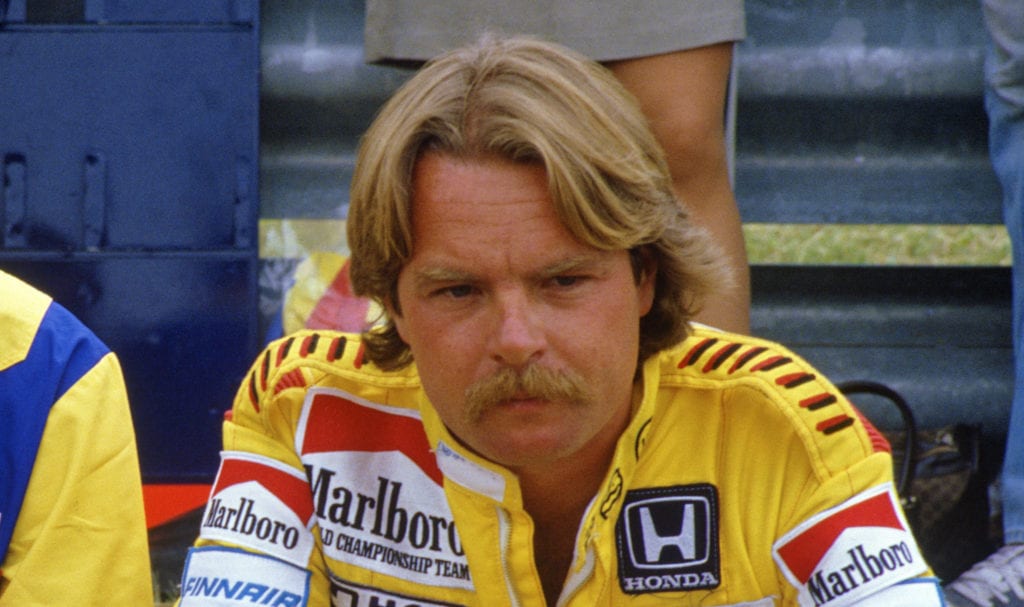