One of the most prestigious races of the year, the Macau Grand Prix is pretty much the young driver equivalent of Monaco, only a little bit more insane. Ever since the first Formula 3 race in 1983 it’s been won by some pretty big names – Ayrton Senna, David Coulthard, Takuma Sato, and the Schumacher brothers to name just a few.

There are also plenty of famous drivers who haven’t won at Macau, because much like Monaco being able to win is often down to more than just speed – you need a bit of luck as well. It’s amazing that a race like this can still exist in 2016, and here are 6 reasons why.

The track is ridiculous

All street tracks are a little bit crazy, but Macau is something special. This onboard with 2002 winner Tristan Gommendy highlights it perfectly – the lap starts with an insanely long straight with fast kinks before climbing up the mountain along some ridiculously narrow and twisty roads. Towards the end of the lap drivers must navigate the Melco hairpin – a corner so tight that there are permanent yellow flags there to prevent overtaking.

The starts are chaotic

Because the lap starts with such a long straight there’s plenty of slipstreaming, with the lead often changing several times before the first braking point at Lisboa.

The 1995 race was packed with recognisable names like Jarno Trulli, Ralf Schumacher, Helio Castroneves and Alexander Wurz. As Trulli and Schumacher battled for the lead all hell broke loose behind them – future Sauber driver Norberto Fontana hit the barrier and flipped over whilst everyone else piled in behind him, completely blocking the track.

The race was restarted and Ralf Schumacher won from Trulli, with Pedro de la Rosa coming home in 3rd.

Yep, definitely be careful at the start

The start of the 2014 race saw a crash very similar to the one that happened in 1995. Contact at Lisboa broke Esteban Ocon’s steering, sending him straight into the wall at the next corner, San Francisco. A few cars got past but Yu Kanamaru wasn’t so lucky, and he went sailing over the stricken cars and ended up perched on the tyre barrier. Luckily no-one was hurt.

As in 1995 the race was restarted, and Felix Rosenqvist went on to to win. Meanwhile Max Verstappen (who had crashed out of 2nd place in the qualifying race) recovered to 7th place having started 24th.

Anything can happen at anytime

The braking zone into Lisboa is difficult enough at the best of times, but in 2004 oil on the track completely changed the complexion of the race. Race leader Nico Rosberg got caught out and went straight into the barrier and out of the race. The driver in 2nd place got caught out too, and who should that be? Why, none other than Lewis Hamilton of course! Hamilton got going again however and went on to finish 14th, whilst Alexandre Premat came through to win the race.

While Macau is undoubtedly a difficult track, as with all racing the biggest challenge out there is often the other drivers. The 1990 race featured this now-legendary battle between future F1 rivals Mika Hakkinen and Michael Schumacher.

Going into the last lap the Marlboro-liveried car of Hakkinen looks to challenge Schumacher for the lead. He gets a nice slipstream, pulls to the right and…that’s his race over – a cheeky bit of weaving from Schumacher ensured he stayed in front. Schuey lost his rear wing but with only a lap to go and a huge gap to the car behind (another Mika – Mr. Salo) he stayed in front to take the win. Funny how rivalries come full circle, isn’t it?

When the flag drops, the racing stops – but the drama doesn’t. When Antonio Felix da Costa won in 2012 it turned out the organisers didn’t have the Portuguese national anthem on hand, which is kinda weird considering that Macau is a former Portuguese colony. The fans, family and team members took matters into their own hands and sung it for him, giving us a brilliantly emotional moment.

While the F3 race is the main event at Macau, the weekend is full of races which are just as bonkers, with touring cars, GT cars and – incredibly – superbikes also taking to the streets. 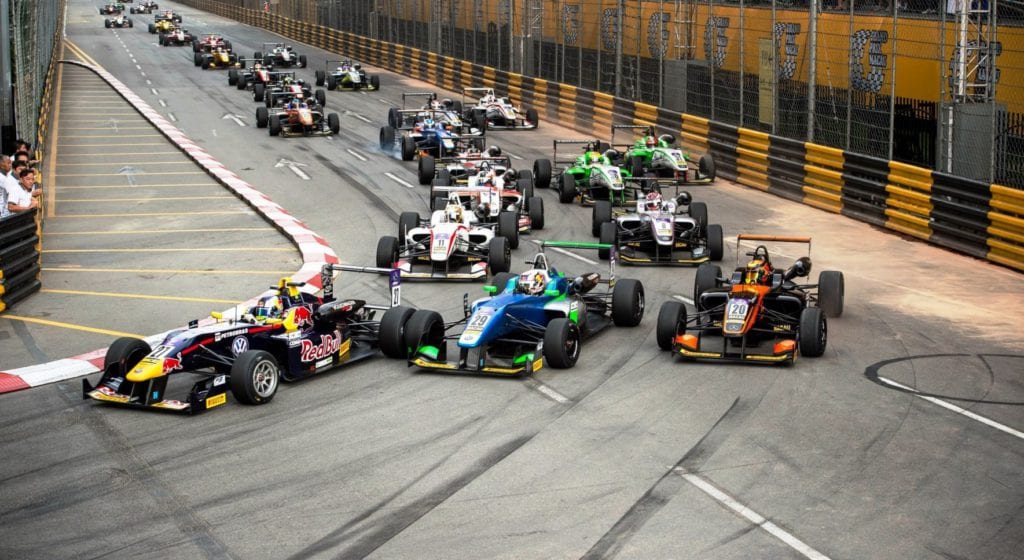