6 Reasons Why You Need To Watch Formula 2 This Year

Formula 2 – formerly known as GP2 – has not only provided F1 with great talents like Lewis Hamilton, Romain Grosjean, Nico Hulkenberg and last year’s F2 champion Charles Leclerc but the racing… oh my word, the racing is just incredible.

With 20 young drivers all looking to prove themselves in front of the F1 elite, it’s no surprise that every race features incredible overtakes, unusual strategy calls and plenty of chaotic crashes.

So with a little help from Renault F1 Reserve Driver Jack Aitken, who’ll be competing in his first F2 season with ART GP, here’s why you need to be watching Formula 2 this year.

Let’s get straight to the number one reason why F2 is so damn entertaining. Overtaking.

Thanks to the simple but beautiful Dallara chassis, cars can follow each other very, very easily, meaning lots and lots and lots of overtaking.

Often you’ll see battles lasting lap after lap and throughout the entire race. You won’t see as much wheel-to-wheel racing in any other single-seater series.

Jack’s view: “There’s lots. Seriously, loads. Great, isn’t it? It’s mostly down to simpler cars and it being a one-make championship.”

Jack’s view: “Two for the price of one (starting to sound like and advert…), but it’s a serious point that allows us young drivers more track time, and allows teams two cracks at it to try different ideas on the same weekend.”

Did we mention that F2 has reverse grids? That’s right, if the second sprint race wasn’t crazy enough already the top eight from the previous race are reversed. With the fastest guys in the middle of the pack, it’s the perfect recipe for a great race.

Jack’s view: “Race 2 is a reverse grid race, meaning you see the top guys fighting in the pack, and midfield runners having a chance to win!”

One of the main reasons Formula 2 sees so much overtaking is due to the varying strategies during the race. Unlike most junior categories, F2 has a mandatory pitstop and like F1 a few years back has an ‘option’ and a ‘prime’ tyre.

Think back to what F1 was like in 2012 when tyres degraded massively during a race and drivers pulled off some audacious strategies to get the upper hand. Last year in Bahrain for example, tyre wear was so bad that Charles Leclerc took a pitstop during the Sprint Race (something you wouldn’t normally see in such a short race) and carved his way through the field on fresher tyres to win the race spectacularly.

Jack’s view: “The pitstops and degrading tyres in F2 make strategy a huge part of Feature Races, and it’s something most of the grid are new to, so it creates a lot of opportunity for exciting races.”

This year the series will be running a new Dallara chassis which looks a lot more like this year’s Formula 1 cars. Despite the change of chassis though, simple aero should still allow the cars to follow each other easily, meaning the entertainment factor shouldn’t change too much.

Jack’s view: “A new car this year (that looks pretty sick, yes, even with the halo) will act as a bit of a reset, it’s very unlikely one team or driver will figure it out quickly, so should see a few different results…”

If you’re wondering who’s going the future stars of Formula 1 then F2 is the place to find them. ART’s Jack Aitken is part of Renault’s Driver Academy and the team’s F1 reserve, while his F2 teammate George Russell is a Mercedes junior. Lando Norris who’ll be racing for Carlin is a McLaren junior driver and so is Prema’s Nyck de Vries.

Lewis Hamilton and Nico Rosberg were both GP2 champions, so whoever takes the title this year, expect them to be in F1 in 2019.

Jack’s view: “Nearly half the grid are on F1 young driver programs, and it’s mostly justified, F2 is the last step and everyone comes here to prove they’re ready for F1, so there’s a very good chance a lot of these names will be around for a long time.” 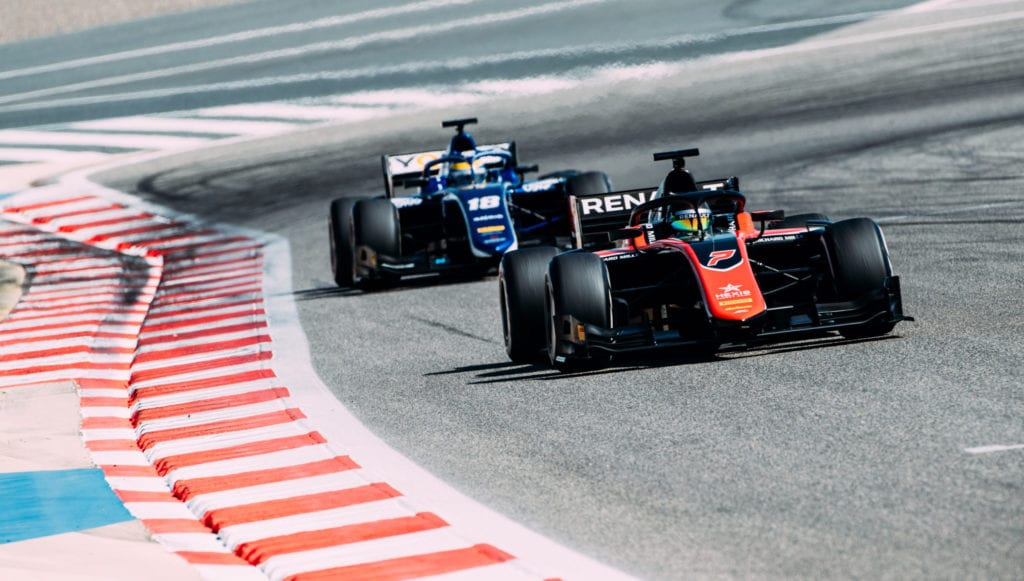