McLaren and Williams are two of Formula 1’s great teams and sadly, both are having a bit of a bad time of things at the moment. McLaren’s decision to take on Honda engines was a disaster, and in 2018 Williams slipped from regular points scorers to being the cars most likely to prop up the timesheets.

With any luck, in 2019 both teams can bounce back and show signs of a return to their former glories. Think it’s impossible? Well, there have been quite a few times in the past that teams have spent a few years in the doldrums before suddenly recovering some form. Here are six ‘comeback’ stories which McLaren and Williams can take solace in.

Throughout its history, Lotus had a habit of making cars which were either utterly brilliant or a bit rubbish. This led to a few fallow periods which never lasted too long because the next moment of engineering genius from Colin Chapman was usually just around the corner.

However, after winning both 1978 championships as a result of pioneering ground effect aerodynamics, the team started the struggle. Other teams made better use of the principles and the cars Lotus made in response were either too radical (such as the banned Lotus 88) or too conservative. The advent of the turbo era didn’t help either, as sheer power suddenly became the thing to have over maximum downforce. But even compared to teams running naturally-aspirated cars, Lotus was falling behind.

Then, in 1983, Lotus finally got its hands on turbocharged Renault engines and halfway through the year introduced the 94T. Suddenly, drivers Elio de Angelis and Nigel Mansell were qualifying and racing towards the front of the grid – in South Africa de Angelis took the team’s first pole in five years and Mansell raced to a podium, taking fastest lap along the way. Lotus was back… sort of.

That late-season upswing in form was the start of a period in which Lotus enjoyed its last genuinely competitive seasons. In 1984 a number of podiums and strong results gave the team third in the constructors’ title (its best result since 1978) and when Ayrton Senna joined in 1985, he and Lotus looked like outside championship bets for the next three years. Unfortunately, when Senna left for McLaren, Lotus’s days of winning seemingly left with him. The team entered another slump – only this time, it would never recover.

In the late 1970s and early 1980s, Ligier proved to be regular race winners and even unlikely championship contenders. The team slipped back during the turbo era but was still a solid midfield outfit, capable of regular points and the occasional podium.

Then, things got dramatically worse. One point in 1987. Nothing in 1988. Three points in 1989, and then nothing in 1990 or 1991. As well as the lack of points, the team regularly struggled to qualify for races and it looked like potentially being the beginning of the end for the French squad in an era where many back-of-the-grid teams started to fall by the wayside.

That all changed in 1992 when the team managed to get its hands on the Renault V10, arguably the best engine on the grid. Though the chassis still wasn’t great, the improvements were enough to lift the team into the midfield and start to score points again with drivers Erik Comas and Thierry Boutsen. The result was six points and eighth in the constructors’ championship – Ligier’s best finish since 1996.

It could have been even better, though. On a sabbatical from F1 after being fired by Ferrari, Alain Prost tested with Ligier with a view to racing for the team in 1992. He eventually decided against it, but reports at the time suggest he was as much as two seconds a lap faster than Boutsen, which would have put the team in contention for podiums once more.

Although it didn’t look it, the 1992 season was the first sign that Ligier was starting to climb out of a hole and back to the midfield. Indeed, over the next four seasons, the team managed a number of podiums (and even a win) before the team was bought by the guy who’d almost been a driver a few years earlier – Alain Prost.

After losing both Honda engines and Ayrton Senna, McLaren entered something of a poor period in the mid-1990s. The team that once came within two laps of winning every race in a season was reduced to scrambling for a few points and race finishes – a strangely familiar scenario.

In 1994 the car was reasonably competitive, but its Peugeot V10 was horribly unreliable. A switch to Mercedes power for 1995 didn’t improve matters as the car suffered from poor handling and though reliability was much better in 1996, the car was still a way off the performance of Williams, Benetton, and even Ferrari (in Michael Schumacher’s hands, at least).

1997 was where things started to really pick up. Now wearing the silver West livery instead of the classic Marlboro orange and white, David Coulthard gave the team its first win in over three years at the season opener in Australia. While the first half the season was pretty poor, McLaren had secured the services of a certain Adrian Newey and as the season progressed, McLaren’s performance improved.

By the end of 1997, the MP4/12 was probably the fastest car in the field. The only weak link was the Mercedes engine which, although powerful, was prone to dumping its contents all over the track, usually while in good positions – Mika Hakkinen alone retired from the lead on three separate occasions. The pace was there for all to see, though – Coulthard won in Monza on merit, and Hakkinen led home a one-two in the season finale at Jerez (with a little bit of help from Jacques Villeneuve and Williams). In 1998, the combination of new rules and Newey having full influence over the car design led to McLaren winning both championships, ensuring the team ended the 1990s with the same sort of success it had begun it with.

Though perhaps more gradual than some of the other teams on this list, you can’t talk about team resurgences without mentioning Ferrari. Although it had come close at times, the team went for more than two decades without winning a drivers’ championship, and almost as long without achieving a constructors’ crown. Things were at their lowest ebb in the early 1990s as even managing podiums became a challenge, despite still being one of the sports biggest and richest teams.

Wins for Gerhard Berger and Jean Alesi crept through but as I’m sure you’re aware, it wasn’t until Michael Schumacher joined the team in 1996 that things really started ramping up. Though there were three wins that year they were mostly down to the driver and not the car, which even designer John Barnard admitted was a terrible car.

For 1997, Ross Brawn joined as technical director and Rory Byrne as chief designer and the situation almost immediately improved. Though the F310B perhaps wasn’t quite up to the performance level of the Williams, the combination of a competitive car, excellent driver and a team now operating as slick at the tyres, Ferrari remained genuine title contenders throughout the year. It was the beginning of an upward curve that didn’t really plateau until the middle of the next decade. That’s some serious compensation for all that time spent not winning anything!

During its short existence, the BAR team went from the back of the grid to challenging at the front before being completely taken over by Honda for 2006. Though the first season as Honda was pretty excellent with Jenson Button taking his first victory, the two subsequent seasons were nothing short of atrocious. The cars turned out to be as slow as the ‘Earth Dreams’ liveries were horrible and very early in 2008, team principal Ross Brawn announced they were basically sacking off the whole season to focus building a car ready for the massive rule changes in 2009. That was going to be the year everything turned around. Honda would be back at the front and the two years of being something of an embarrassment would be a distant memory.

Then, Honda pulled out of the sport. The car was pretty much ready to go but there was nobody to run it and the drivers were out of a job. We’d never know if the Honda RA109 would have been a world beater. Luckily, with less than a month to go before the start of the season, a deal was done which would see the team remain in the championship under the name of Brawn GP, and so began one of Formula 1’s greatest fairytale stories.

Brawn showed pace in testing, but nobody was quite sure whether it was genuine or just a publicity stunt to try and gain sponsors. When the team rocked up to Albert Park for the first race, the truth came out – the car was bloody quick, thanks in part to the controversial double diffuser – a loophole in the regulations which only Brawn, Toyota, and Williams had spotted. Button won the race and claimed five more victories over the next six races, setting up a remarkable championship double for a team operating on a tiny budget with minimal development. The team was then taken over by Mercedes and well… you know the rest.

When the team’s partnership with BMW ended after the 2005 season, Williams slipped back into a true midfield team. There were a few podiums, the odd strong race and of course, that enormous win for Pastor Maldonado, but generally speaking it looked like the glory days were well and truly gone – especially after a woeful 2013 season in which the team scored points in just two races.

For the advent of the hybrid era in 2014, Williams made the decision to drop its Renault power supply for a Mercedes one – and what a decision it proved to be. In that first year, the Mercedes was the power unit to have and Williams made excellent use of it. The team wasn’t just regularly scoring points again, it was taking regular podiums. There was a pole position in Austria and at the season finale in Abu Dhabi, Felipe Massa wasn’t a million miles away from winning as Valtteri Bottas finished first – Williams’ first double podium in over nine years.

It wasn’t all down to the power unit as the FW36 was a handy chassis, especially on fast circuits. All of this combined allowed Williams to finish third in the constructors’ championship, a position it repeated the following year. From there Williams has slowly slipped back to the point where in 2018 it finished last in the championship – the worst result in the team’s history. 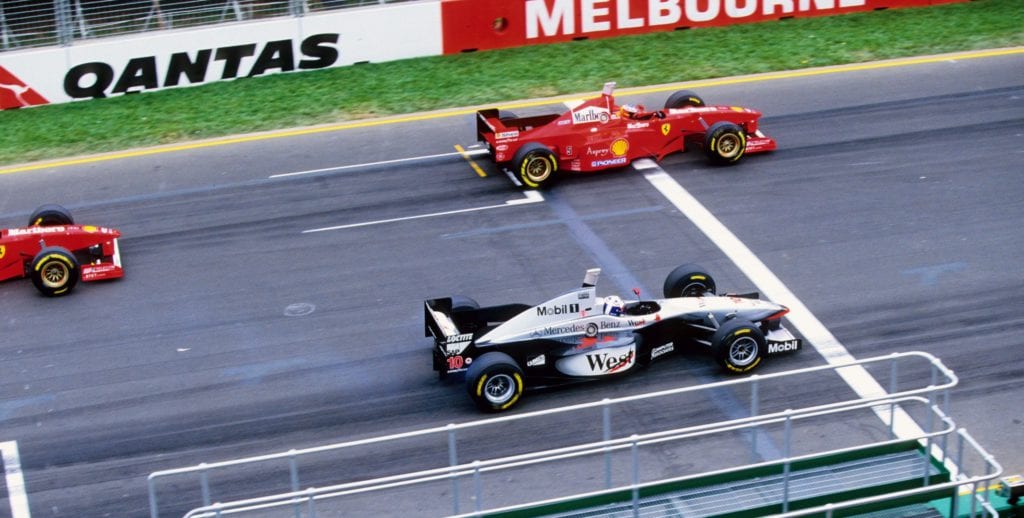