6 Times The Winner Of The First Race Didn’t Challenge For The Championship – WTF1
Skip to content
×
Formula 1 , News

In 68 seasons of the Formula 1 World Championship, the driver who wins the first race has gone on to win the title 35 times. Those that win the first race but not the championship are usually at least in contention for it – think Sebastian Vettel in 2017, Fernando Alonso in 2010, or Eddie Irvine in 1999.

However, there have been a few years where the driver who won the first race barely featured again for the rest of the season. Here are just six occasions.

The first race of 1966 – the Monaco Grand Prix – only had four classified finishers. The highly attritional race saw Jackie Stewart win for BRM, building on the strong debut season he’d had the year before. However, if he’d thought it would kick-start a championship challenge, he was wrong.

This was the first year of F1’s new 3.0-litre engine regulations and BRM went down the disastrous path of developing its overweight and unreliable H16 engine. When that wasn’t working the team had to use an underpowered 2.0-litre unit and as Brabham romped to the title, Stewart never even managed to grace the podium again that year.

Legendary all-rounder Mario Andretti made his F1 debut in 1968, but for much his early F1 career he only entered the odd race here and there. In 1971 he joined Ferrari and promptly took his first F1 victory on his debut for the team at the season-opening South African Grand Prix.

However, although he did the next three races, he didn’t score in any of them (even failing to qualify at Monaco), at which point he put his focus back on his racing commitments in the USA. Andretti returned to F1 and Ferrari for a couple more races that season (fourth at the Nurburgring his only other notable result), but even if he had done the whole season, he probably wouldn’t have been a title contender.

Although the Scuderia had a decent season and finished third in the constructors’ title, Ferrari (and every other team!) was totally outclassed by Jackie Stewart and Tyrrell.

Mansell made the switch to Ferrari from Williams in 1989 but wasn’t expecting much from his first year in red. The team had developed the first semi-automatic paddle-shift gearbox in F1 and although it was clearly effective, it was also horribly unreliable. As a result, Mansell booked an early flight home from the first race of the year in Brazil, fully expecting to retire when the car broke.

Of course, it didn’t break. Mansell took the lead from Riccardo Patrese, led most of the race, and became the first Ferrari driver since Andretti to win on his debut for the team. In true Mansell fashion, there was post-race drama too as he somehow managed to slice his hand open on the trophy.

The predicted unreliability meant Mansell retired from the next four races, but when the car was working, it worked well. A string of five mid-season podiums (including another win in Hungary) helped him to a final position of fourth in the championship, but McLaren once again dominated as the Prost-Senna rivalry reached new heights.

1997 was looking ominous when Jacques Villeneuve plonked his Williams on pole for the first race in Melbourne by a massive 1.7 seconds, but when he was taken out by Eddie Irvine at the first corner, the race was thrown wide open.

Heinz-Harald Frentzen was a threat in the other Williams until a botched pit stop and brake failure ended his chances, and when Michael Schumacher had to make a late second pit stop the pressure was off Coulthard to win for McLaren – the team’s first since 1993.

It was a false dawn, however. For much of the year the car wasn’t especially quick or reliable, to the point when Coulthard had only added four more points to his 10 from Melbourne after the 12th race of the season. By this point improvements had made the MP4/12 among the fastest cars, but another win at Monza and a couple of podiums were nowhere near enough so late into the season with Ferrari and Williams slogging it out at the front.

Yep, it’s Coulthard again! For a few years he’d been something of an outside contender for titles, and in 2003 he started the year off with his second Australian GP victory. Just as in 1997, though, it was something of a fortunate victory as Michael Schumacher, Kimi Raikkonen and Juan Pablo Montoya all threw away their chances.

Although 2003 was a very close season, Coulthard never really threatened at the front again. He struggled with the new one-lap qualifying system and whilst teammate Raikkonen was three points away from being champion, Coulthard only scored two more podiums and finished a lowly seventh in the title race.

Pretty much since his F1 career began in 1996, Giancarlo Fisichella was regarded as a seriously good driver who’d simply never had the chance to prove it in a competitive car. Years of giant-killing performances for Jordan, Benetton, and Sauber were finally rewarded with a seat alongside Fernando Alonso at Renault for 2005.

Things started incredibly well for Fisi with a win from pole in Australia, but he was helped enormously by most of his rivals starting well down the order after having to do one of their two qualifying laps (yep, this was the year of the awful aggregate qualifying system) in the wet.

Whilst Alonso won seven times on the way to his (and the teams) first championships, Fisichella’s challenge came to nothing – he didn’t even make the podium again until the 15th race of the season in Monza. 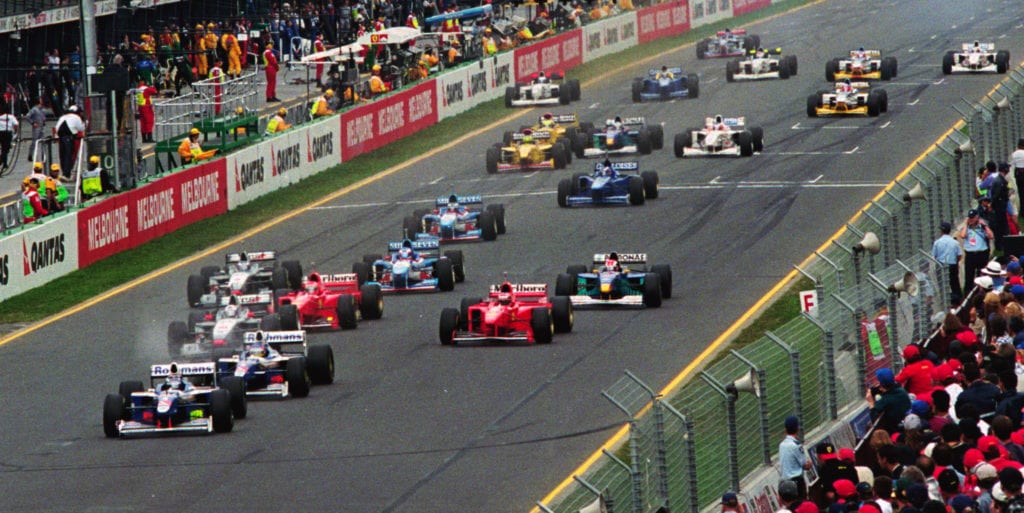