Four pole positions from 256 Grands Prix isn’t a statistic that screams ‘qualifying master’, but Jarno Trulli is one driver for whom statistics alone don’t tell the whole story.

He was never really in a car capable of being regularly at the front, and losing his seat at a Renault team on the ascendancy through petty squabbles with management wasn’t the best moment of his career.

Trulli is also remembered for the ‘Trulli train’ phenomenon – a common sight in the mid-2000s as he would hold up huge queues of much faster cars, unable to overtake because, well, it was the mid-2000s. But the whole reason the Trulli train was a thing was because he’d usually qualified so much higher than expected and come the race, the car simply didn’t have to pace to stay there.

Watching his quali laps back now it’s clear that this was a guy who absolutely knew how to drive fast, because they look absolutely beautiful. So for a few minutes forget about some of his faults and just enjoy his immense qualifying talent, because there are few better.

The 1999 Prost AP02 was a pretty pants car, but if there’s one track where a driver can go someway to overcoming the shortfalls of the car it’s Monaco. Especially when that driver is a bit of a Monaco specialist, and especially when they’re a good qualifier.

Unfortunately we don’t get to see all of it, but Trulli’s lap a was a belter and it was good enough for 7th on the grid, ahead of both Benettons and both Williams. More significantly though, teammate Panis (a winner at Monaco in 1996) was way down in 17th, almost a second slower.

Jarno had a fairly difficult year in 2003, especially considering the meteoric rise of his young teammate, Fernando Alonso. But at the last race of the season in Japan Trulli was absolutely on it. He was fast all through practice and in the first qualifying session he produced this stunning lap to go top of the timesheets.

That meant that in the second qualifying session – the one that mattered – he’d go last of everyone and theoretically get the best track conditions. Unfortunately for Jarno and a few others, before he could set his lap the rain came down. In fact it came down so heavily he didn’t even bother setting a time and he had to start the race from the back. Despite that he still finished fifth in the race though, proving that his pace was no fluke.

Yep, here it is: one of the best pole laps of all time. The speed he manages to carry around the track borders on being unbelievable – it’s just so, so good to watch.

On race day he converted it into his first and only victory, despite the best efforts of a charging Jenson Button.

A week after winning his first race Trulli was on a confidence high, and despite the Renault not being brilliantly suited to the Nurburgring he still managed third on the grid with this lovely lap. He slipped back to fourth in the race, but still finished ahead of Alonso. In fact, Trulli had raised his game so much since 2003 that he was now consistently beating the Spaniard.

Sadly his season unravelled when he was passed by Rubens Barrichello on the last corner of the last lap at the teams home race in France, costing them a podium finish. Relations soured and he failed to score another point for the next five races, at which point he was sacked by Briatore before the season was over – even though at that point he was still ahead of Fernando in the championship…

After the horrible way his time at Renault ended, Trulli bounced back with the Toyota team and put in the same kind of performances as he had at the start of 2004. His qualifying laps at Sepang were absolute beauts, good enough for the front row. His combined time (yep, remember that horrible qualifying format?!) was a second quicker than the next fastest non-Renault.

Trulli carried on being excellent for the next few races – after five rounds he was Alonso’s closest championship challenger and consistently qualified near the front.

As 2005 progressed Toyota slipped behind McLaren and Ferrari, and Trulli slipped behind his team mate Ralf Schumacher. The qualifying laps were still there though, such as this mega lap of Spa. Just two tenths off of pole and a whopping eight tenths up on your teammate? A pretty good day in the office.

2006 wasn’t a great year for Jarno as for the first time ever he was beaten in qualifying by his teammate over the season, but he bounced back for 2007. For some reason Toyota never seemed to do well at Monza but Trulli put the TF107 9th on the grid whilst Ralf was way down in 17th.

This lap isn’t particularly fast but his driving style is just so pleasing to watch. There’s no fuss and no drama, even over Monza’s clumsy chicanes.

Despite rumours of retirement Jarno had mini-renaissance in 2008, and when Toyota gave him a decent car in 2009 we started to see glimpses of the Alonso-beating Trulli from a few years earlier. With the global recession hitting hard however and no real results to speak of, the writing was on the wall and Toyota withdrew at the end of the season, despite some more quality efforts from Trulli.

He was left was nowhere to go but the new Lotus team. Things went ok-ish in 2010 but by 2011 the fire was gone, and when Petrov replaced him for 2012 that was that for his F1 career.

On Sundays you were never quite sure which Jarno Trulli would turn up, but on Saturdays he was rarely anything less than brilliant. A curious character, there’s been no one else quite like him. 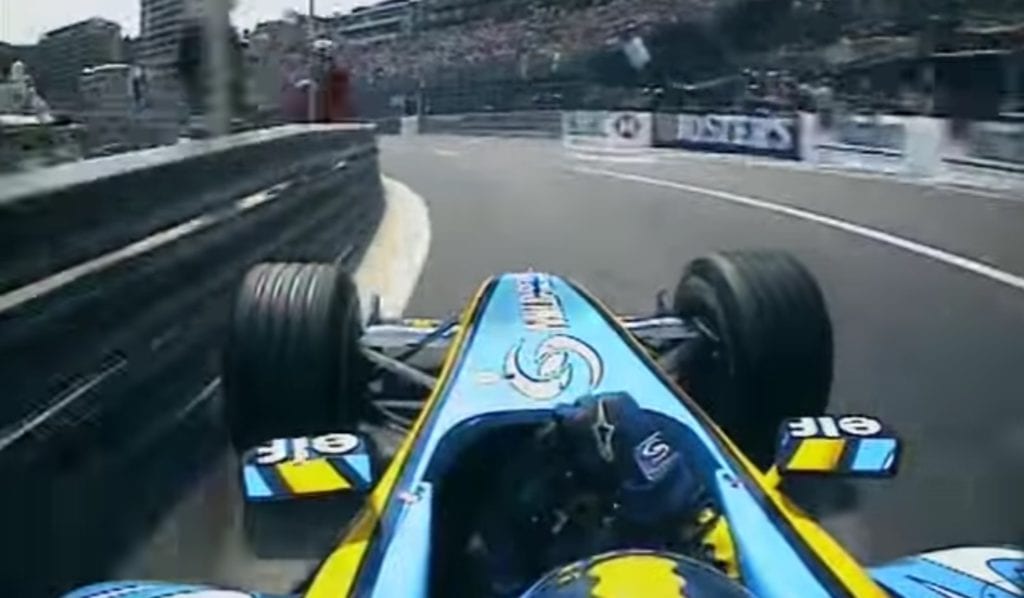