F1 returned to action for eight days of winter testing in preparation for the fast-approaching 2017 season, with running spread out over the last two weeks.

But, while some teams managed plenty of running and drivers enjoyed untroubled testing at the Circuit de Barcelona-Catalunya in Spain, there were also some awkward and not so straight-forward moments.

Williams racer Lance Stroll didn’t get his first test as a fully-fledged F1 driver off to the best start when he brought the team’s running to an early end following a spin through the Turn 9 gravel trap. Repairs had to be made and that cut Stroll’s first day of testing short.

Yep, another tough moment for Stroll. Having spun out on day two of testing, he spun again in the morning on day three and then crashed into the wall on his 99th lap at the exit of Turn 5. Not ideal preparations for his rookie season…

There were quite a few spins during F1 testing but this one was more spectacular than most. New Mercedes recruit Valtteri Bottas gave the wall at Turn 9 the slightest of touches after a high-speed spin at the exit. New overalls were probably needed after that.

Another driver to find the wall was fellow Finn Kimi Raikkonen. He probably wasn’t too fussed by the crash into the barrier, after losing the rear at Turn 3 and spinning off into the wall. “Bwoah” was probably his response but we doubt the rest of the Ferrari team were as chilled about it.

McLaren Honda got through a staggering five engines during the first four-day F1 test. That’s pretty damn awkward… especially considering each F1 car is limited to just four engines in 2017. Unsurprisingly McLaren and its drivers have vented some frustration in the media.

If you were hoping McLaren’s second F1 test would be smoother, then think again. The final four-days of running were plagued by problems once again. McLaren and Honda are in some serious trouble…

Jolyon Palmer was one of the many drivers to spin their new 2017 F1 cars, but his was in unusual circumstances. We don’t see drivers spinning on their out laps very often! 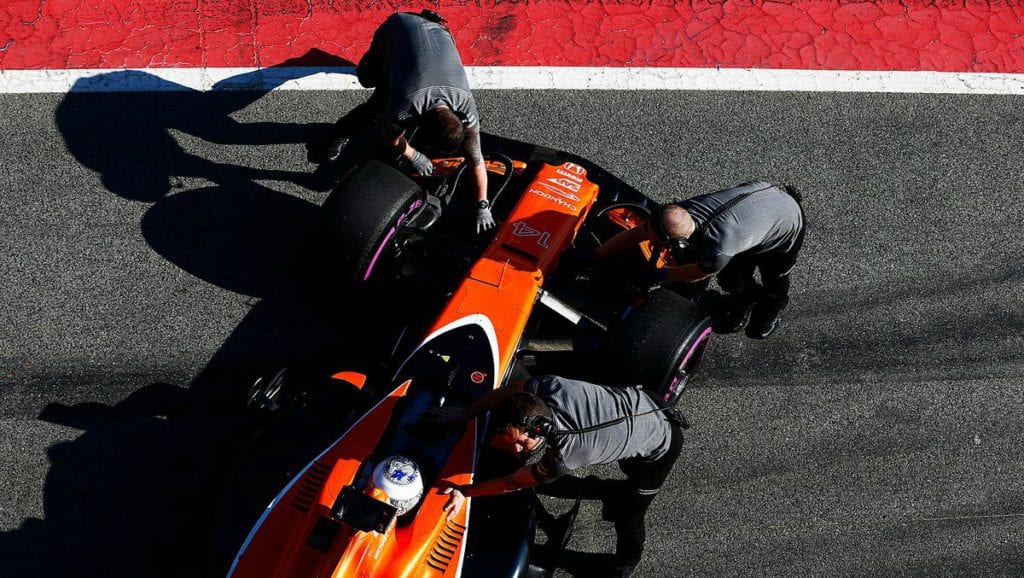