7 Circuits Which Were Supposed To Host F1 Races, But Didn’t – WTF1
Skip to content
×
Formula 1

7 Circuits Which Were Supposed To Host F1 Races, But Didn’t

With the planned Miami GP recently revealing its third different layout as the city attempts to get an F1 race, you have to wonder if it’ll ever happen.

If not, it’ll join a list of circuits which were at some point included on various provisional F1 calendars, but ended up never going ahead. Let’s have a look at a few of them…

The first Chinese Grand Prix took place at the Shanghai circuit in 2004, but if all had gone to plan, F1 would have headed to China in the previous century. The Zhuhai International Circuit opened in 1996 and was supposed to mark the second round of the 1999 F1 season.

However, just a few months before the race, the FIA announced that the race had been postponed due to organisational problems. There was a plan to move the race to the end of the season (which never happened), and another to move it to the 2000 season, which never came to fruition. In the end, Zhuhai ended up being best known as a bit of a sportscar circuit, hosting rounds of the FIA GT championship and Intercontinental Le Mans Cup.

A short, simple, flat layout with little in the way of interesting corners, I don’t think F1 really missed out on anything. Then again, Shanghai’s layout isn’t especially memorable and that can produce good racing – perhaps Zhuhai would have been the same.

The idea of the USA hosting two grands prix is nothing new. In the 1960s and 70s, Watkins Glen on the east coast was F1’s permanent stateside fixture and in 1972, there was a desire to add another race on the west coast.

Ontario Motor Speedway (located in southern California, not Canada) was going to be that place – a state-of-the-art (for the time) ‘copy’ of Indianapolis with an infield road course section, the circuit held a non-championship event for F1 and F5000 cars in 1971 called the ‘Questor GP’. The race featured pretty much all the big F1 stars and teams of the day – Jackie Stewart, Graham Hill, Emerson Fittipaldi, Lotus, Tyrrell, BRM – but it ended up being won by Mario Andretti in a Ferrari.

Although the event proved popular, unfortunately the money ran out and the plan for it to host a race of the World Championship was never realised. F1 had to wait until it went to Indianapolis in 2000 for its first ‘roval’. The US GP West did become a thing though, with Long Beach taking on the moniker from 1976-83.

Another more recent attempt to add a second race in the USA came in the early 2010s, when Bernie Ecclestone was desperate for a New York street circuit.

Although the planned layout was actually in the state of New Jersey, the Manhattan skyline would have made for an impressive backdrop for a circuit located on near the Hudson River. First dreamed up in 2011, the ‘Grand Prix of America’ was set to appear on the 2013 calendar but constant dithering on the part of both the organisers and the FIA meant that the race had to be cancelled. There were repeated attempts to get something in place for future seasons but it never happened, and the idea of a street race in New York was eventually taken up by Formula E.

Efforts for the Port Imperial circuit were pretty serious, though – Red Bull even did some demo runs around the proposed layout.

It’s a shame it never happened because as street circuits go, the layout actually looked really interesting, with plenty of elevation changes. Maybe one day Liberty’s keenness will see the idea revived…

In the mid-1980s, plans to bring F1 to streets of Rome were gathering momentum and when the 1985 Dallas GP ended up being cancelled, Rome ended up taking its place on the calendar under the guise of the European GP.

Scheduled to take place in October as a one-off event, the circuit was going to be located on the outskirts of the city in and around the Palazzo Della Sport in the EUR area. Although the FIA approved the layout, there was some opposition to the race and, with local elections looming, the local council decided to vote against hosting the race. The European GP that year ended up being hosted at Brands Hatch instead, where Nigel Mansell claimed his first victory

It was probably no great loss – with a predicted average lap speed of 93mph, the Rome circuit would have been about the same speed as Monaco. And, judging by the look of all of those tight chicanes, a far less interesting track. Funnily enough, these days the Rome ePrix is held in pretty much the same location, where it’s probably one of the better layouts in Formula E. Perhaps an F1 race wouldn’t have been so bad after all…

Built in the late 1980s to a budget of $500 million and billed as a racing resort, Autopolis’s wealthy and eccentric owner Tomonori Tsurumaki decided that he wanted his race track to host a grand prix. He even went so far as to sponsor the Benetton team in the early 1990s as a form of promotion, with the Autopolis logo appearing prominently on the cars.

After hosting the last round of the 1991 World Sportscar Championship (an event won by Michael Schumacher), Autopolis was included on the provisional 1993 calendar. Unfortunately, at around the same time, Tsurumaki filed for bankruptcy and couldn’t afford to host the race, at which point it was replaced on the calendar by Donington Park. The track was also incredibly remote, and the logistics of hosting a series as massive as F1 would have been an absolute nightmare.

The circuit itself was left to sleep in mountains until it was purchased by Kawasaki in 2005, where it’s now a popular venue for national Japanese series. F1 also pushed through with the idea of adding a second race in Japan to the calendar with races at Okayama in 1994 and 1995 under the name of the Pacific GP. Ironically, that ended up suffering from the same problem of remoteness that Autopolis had.

If you like uninspiring 90-degree corners and chicanes, then this is the circuit for you. After the Jarama circuit fell out of favour, plans were afoot to move the Spanish GP to a street circuit in the beach town of Fuengirola on the Costa del Sol.

It was supposed to feature towards the end of the 1984 F1 season but thankfully, given the pants layout, it couldn’t be made ready in time and was replaced by the Portuguese GP at Estoril. Spain eventually returned to the altogether more suitable Jerez circuit in 1986.

Yet another street circuit proposal in the USA (and once again New York), F1 tried really hard to make this one happen – this time with a circuit located in Flushing Meadows Corona Park in Queens, near the site of the 1964 World’s Fair.

Taking place on roads around a small lake and bearing more than a passing resemblance to the Albert Park circuit, the ‘Grand Prix of America’ was initially included on the 1983 calendar. It was a time when F1 seemed obsessed with the USA and if all had gone to place, that season would have had four races stateside – Detroit, Long Beach, Las Vegas, and New York. However, Las Vegas was cancelled, while the New York race it was replaced by a European GP at Brands Hatch and postponed until the following year.

Organisation problems hit again and it was deferred until 1985 when the plans once again fell through – at which point everyone seemed to give up with the idea.

Maybe one day New York will host a Grand Prix, but until the lights go out and the cars are racing, history shows that it’s probably best to take any proposals with a fistful of salt. I’m starting to feel the same way about Miami… 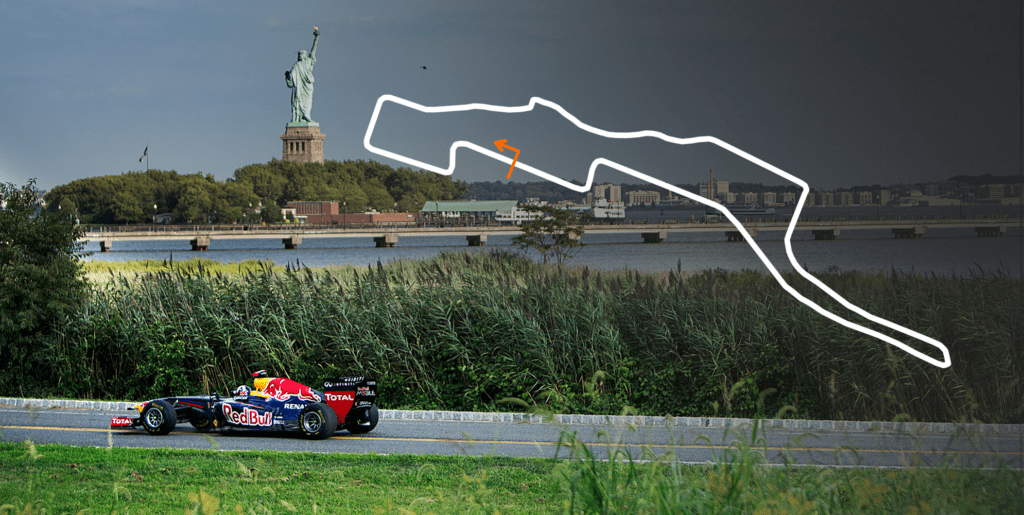