You could almost hear the jaw of every F1 fan slamming into the ground when Hamilton crossed the line in Q3 to set a 1:36.015. It was an amazing lap that really came out of nowhere and turned out to be more than enough for pole – although if Max Verstappen’s car was working properly, things might have been a bit closer.

As well as being a monster lap, it also shows just how much F1 has progressed over the years. Here are a handful of eye-opening stats.

We all expect drivers to find lap time as qualifying progresses, especially on a street circuit. But when it came to Q3, Hamilton found way more lap time than anyone else.

His pole lap was 1.329 seconds better than his Q2 effort. For comparison, Verstappen found 0.880 seconds, whilst Valtteri Bottas ‘only’ gained 0.553.

On paper Sebastian Vettel did well too – he gained 1.248 seconds – but his Q2 time was rather poor as he ended up seven tenths behind his teammate and half-a-second behind Hamilton. Theoretically, he had the best chance to improve the most from his Q2 time, yet he didn’t

Of the top six, Kimi Raikkonen found the least amount of time, his Q3 time being just 0.400 seconds faster than he was in Q2.

Firstly, it’s important to say that the circuit has had some minor changes since last year. Turns 16 and 17 (the crashgate corners) were slightly reprofiled, making the track two metres shorter than in 2017, and some areas have also been resurfaced. Pirelli also has the new-for-2018 hypersoft compound, but even so, 3.476 seconds is a massive amount faster.

Vettel’s 2017 pole time of 1:39.491 would have seen him knocked out in Q2 this year and placed behind Marcus Ericsson. And whilst Williams only managed a pair of low 1:41s this year, in 2017 that would have been enough to see both drivers easily through to Q3.

Again, there are some track changes to take into account with the reprofiling of the Anderson Bridge section for 2015, but it just shows how much progress has been made, both by the teams and the sport, with the introduction of the more downforce-heavy cars in 2017.

OK, this is just ridiculous, because back in 2009 the track still had the ‘Singapore Sling’ chicane and drivers had to qualify on race fuel, but it’s too good a number not to include. The 11.876-second gap is an absolute chasm.

In fact, it’s only slightly smaller than the time difference between Hamilton’s Q2 lap at Spa this year and Ayrton Senna’s pole lap at the same track 30 years ago, which probably says as much about the 2009 regulations as it does the 2018 ones, to be honest.

Despite being a mega lap, Verstappen’s equally impressive performance means the gap to second was only 0.319 seconds. That makes it the third-largest pole margin so far this season, behind Australia (Hamilton beat Raikkonen by 0.664 seconds) and Belgium (Hamilton beat Vettel by 0.726 seconds) – although that was a wet session.

Despite the general feeling that Mercedes isn’t that great around Singapore, this is actually the team’s third pole there in the last five years.

In 2014, Hamilton beat Nico Rosberg by just 0.007 seconds with Daniel Ricciardo in third, 0.173 seconds off pole – though that is admittedly a smaller margin than Mercedes typically enjoyed in 2014. The other came in 2016 when Rosberg was absolutely on fire – he was 0.531 seconds ahead of Ricciardo in second, and 0.704 seconds ahead of Hamilton.

Both of those poles resulted in a victory and although Hamilton’s win in Singapore last year was slightly fortunate, it begs the question as to whether Mercedes really is as bad around the Marina Bay circuit as everyone seems to think.

Think about that for a minute. 79 pole positions from 223 entries. He’s already 11 poles clear of Michael Schumacher’s old record and at the rate he’s currently going (and assuming Mercedes continues to be at least a contender), he’ll have smashed the 100 mark well before his current contract is up at the end of 2020.

Is he the greatest qualifier ever? Even if you ignore the numbers he’s surely up there with the likes of Senna, and it’s laps like this that show why. 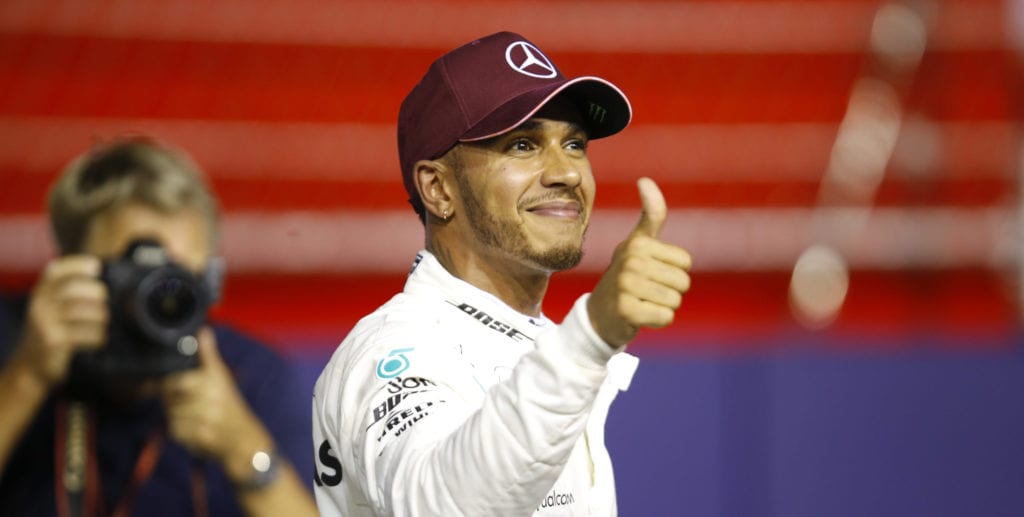