7 Drivers Who Returned To F1 After Serious Injuries

The chances of Robert Kubica making a comeback to F1 are looking more and more likely, almost with each passing day. It’d be an incredible story considering the extent of the arm injuries he suffered in his rallying accident back in 2011 which almost killed him.

In light of this we thought we’d take a look at seven other drivers who showed that suffering a bad injury doesn’t have to spell the end of an F1 career.

In qualifying for the 1995 Australian Grand Prix at Adelaide, a puncture sent Hakkinen’s McLaren across a kerb and into the wall at over 120 mph. He’d been knocked unconscious and suffered a skull fracture and minor brain injuries. Only an emergency tracheotomy performed trackside saved his life.

After a long and difficult recovery and further surgery he was able to be back in the car for testing ahead of the 1996 season, where he immediately showed he’d lost none of his speed. When Adrian Newey and McLaren got the 1998 regulations bang on he was able to win the championship and then followed it up with another one the following year.

The great Fangio didn’t get a chance to defend his maiden title in 1952 as rule changes put Alfa Romeo out of the sport and Fangio without a drive. He had a few runs in non-championship races though and it was in one of these at Monza that he had a nasty accident which left him with a broken neck and out of racing for the rest of the year.

He recovered in time for the 1953 season however and went on to finish an impressive second in the championship. He of course then went on to win the next four championships – his injuries hadn’t blighted his talent at all.

Johnny Herbert was on the way to being F1s next big talent after a massively successful junior career. However his prospects appeared to have ended following a monster shunt in Formula 3000 in 1988 which left both his feet almost literally hanging on by a thread. Although he managed to avoid having them amputated he was told he might never walk again, let alone drive a racing car.

After multiple operations he wasn’t just back racing again though, but he found himself on the grid for the first Grand Prix of 1989 driving for Benetton. He was on crutches and had to be lifted into the car but he finished an amazing fourth, despite being in incredible pain. His form dropped off over the rest of the year as a result of his injuries and the team eventually dropped him, but he went on to forge a successful career which included two wins for Benetton in 1995, and another one for Stewart in 1999, and a famous Le Mans victory for Mazda in 1991.

The injuries always had an effect on his ability though, and you have to wonder just how successful he could have been were it not for that accident.

Graham Hill’s F1 career should have come to an end when he smashed both his legs to pieces in the 1969 United Stated Grand Prix and ended up being confined to a wheelchair for months as a result. But Graham was a determined fellow and wasn’t ready to give up just yet, and he was on the grid for the season-opening South African Grand Prix in 1970, where he went on to finish sixth and had to be lifted from the car afterwards.

But whilst his determination was impressive he wasn’t the driver he had been before the accident, and aside from a non-championship win at Silverstone in 1971 the best he could hope to achieve was the occasional points finish in attritional races.

Probably the most famous comeback of all time, Niki Lauda was burned so badly in his horrific fiery accident at the Nurburgring in 1976 that he wasn’t expected to survive. Yet amazingly just six weeks later he was back in his Ferrari to resume his title battle with James Hunt.

In his comeback race he outqualified his Ferrari teammates and bravely finished an outstanding fourth, even though his bloody burns were still in bandages from the accident. He was still leading the championship heading in the the final round in Fuji, but the race was so wet that he couldn’t see properly as a result of his burns and withdrew from the race, allowing Hunt to finish third and win the title.

He cantered to the title the following year and after a brief retirement came back to win another one, this time for McLaren. Not bad for someone who’d had a priest administer them their last rites!

In qualifying for the 2009 Hungarian Grand Prix Felipe Massa was struck by an errant spring from Rubens Barrichello’s Brawn and many wondered if he’d survive.

The impact knocked him unconscious and the spring pierced his helmet, fracturing his skull and coming perilously close to blinding him. After being put in a coma and given emergency surgery he began a road to recovery which included a metal plate being put in his head ahead of his return in 2010.

Although he qualified on the front row ahead of new teammate Fernando Alonso in his first race back he’s never quite seemed like the driver he was before the crash and hasn’t managed a win since the 2008 season finale. Well, there was the race in Hockenheim in 2010 but y’know, ‘Fernando was faster’…

Martin Brundle was rival for Ayrton Senna in British F3 and like Senna, he made his F1 debut in 1984. Brundle was driving for Tyrrell and finished an impressive second in Detroit, but at the next race in Dallas a qualifying crash into the unforgiving concrete blocks lining the circuit left him with broken feet and ankles, and ultimately unable to enjoy anywhere near the levels of success that Senna did.

Brundle missed the rest of 1984 as he recuperated and was back with Tyrrell for 1985. However his injuries prevented him from left foot braking, something that proved to be a major hinderance in his career. Despite that Brundle went on to reasonable amount of success and though he never won a race, he’s widely considered to be one of the best drivers never to do so. 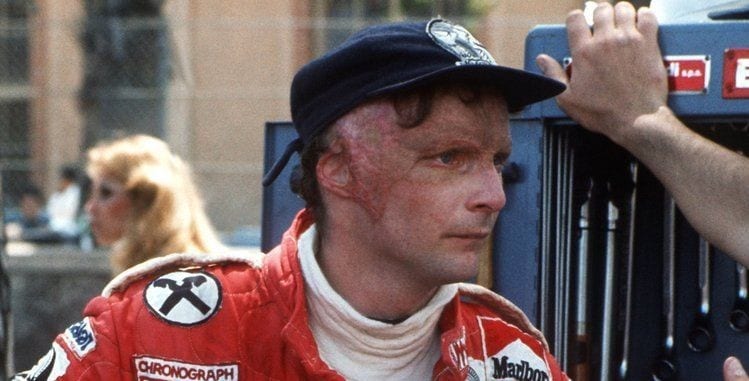