7 F1 Debuts That Were Over Before They’d Barely Begun

In F1’s 70 year history, there have been 770 drivers who have competed in at least one race. That’s a whole lot of driver debuts; some good, some bad and some very very ugly.

After Nikita Mazepin’s nightmare first-lap crash in Bahrain, we wanted to look back at some other first-time drives that didn’t go to plan.

When Andre Lotterer raced for Caterham at the 2014 Belgian Grand Prix he became the oldest driver to debut in F1 since 1995, aged 32 years and 288 days old. For Lotterer, this race was to be his only chance at F1 and was extremely short-lived.

Despite his great success at events such as Le Mans, Lotterer would retire just one lap into the race with a mechanical issue. It was suggested the loss of power was down to his aggressive driving over kurbing at the Blanchimont turn.

During the second lap of the 2010 Bahrain Grand Prix, Karun Chandhok’s first F1 race ended rather prematurely. Chandhok’s Hispania Racing car hit a bump on the circuit and spun, resulting in significant damage to the front wing. He was forced to retire the car on the spot.

The last time a debutant had such a disappointing start to a race was back in 2002 for the Australian Grand Prix. At the front of the grid, Ralf Schumacher started brilliantly from 3rd when he got caught out by Rubens Barrichello’s braking ahead. Schumacher’s car flew overhead, and triggered a pile up further back.

In total, the accident ruled eight cars out of the Australian Grand Prix. Among those out of the race were Felipe Massa in his Sauber and Allan McNish of Toyota; two brand-new rookies to the championship.

It happens to even the best drivers, Michael Schumacher’s debut famously ended on the first lap when his clutch failed just after Eau Rouge/Raidillon.

Schumi had started a brilliant 7th, and already made his way up to 5th at the start, but when trying to keep his Jordan 191 from understeering, Schumacher lifted his clutch so suddenly that the force shattered it completely!

Thankfully his performances had already made a great impression, he joined Benetton full-time later that season and the rest is history.

Another driver here whose Jordan F1 career lasted less than a lap but for Marco Apicella, things were even worse than Schumacher.

The Italian was taking part in his home race after impressing Eddie Jordan in the junior series but his race ended on the first corner of the very first lap when he was caught in a classic 90s Turn 1 pileup at the back of the field.

It would be Apicella’s only F1 start meaning his entire F1 career lasted about 400 metres, still it could be worse…

Yep. That’s right. Two metres! Ernst Loof was taking part in his home race at the 1953 German Grand Prix when he had a fuel pump failure and only managed to roll about two metres from his starting position.

It goes down as the shortest F1 career in history but Loof will be more fondly remembered as a car designer, having contributed to the BMW 328 sports car of the late 1930s.

Any others you think we should have included? Let us know in the comments below. 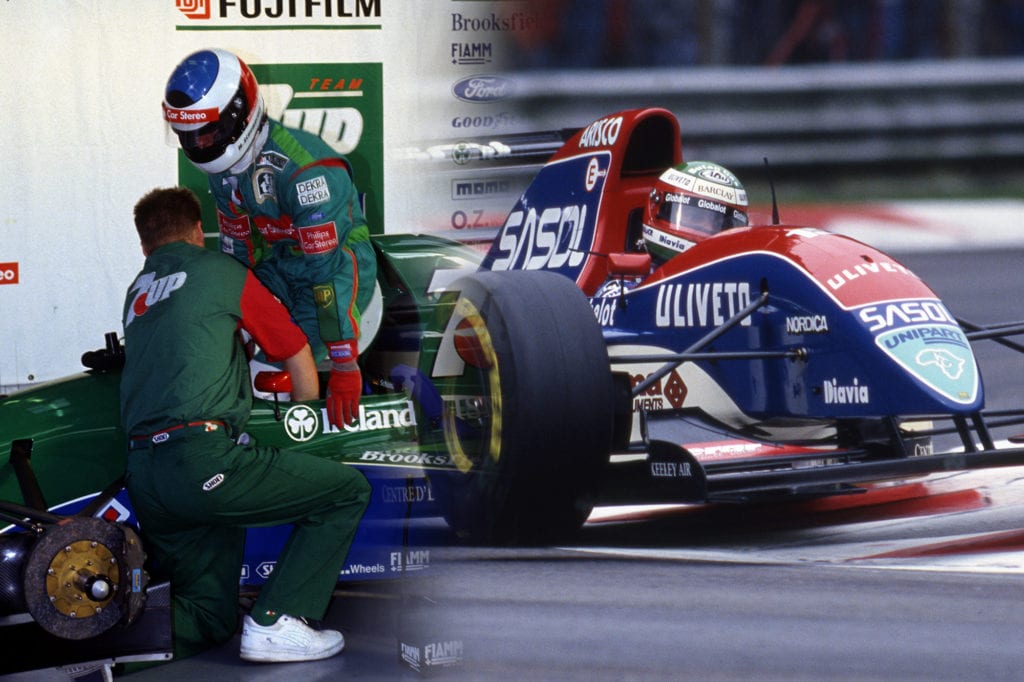