7 F1 Teammate Pairings That Seem Strange To Think About Now

An unusual teammate partnership can take a few different forms. Maybe it’s someone at the end of a long career teaming up with someone at the beginning of a long one, two drivers with disjointed careers unexpectedly meeting, or maybe a pairing that’s simply a bit forgettable.

Though they seem somewhat normal in period, the magic of time can make some stand out as being a bit strange. Imagine if Antonio Giovinazzi is still racing in the year 2035 – Kimi Raikkonen would be 56 years old, yet will have been one of Gio’s former teammates. It’ll seem strange, right? That’s the vibe we’re going for with this list. Enjoy!

In Rubens Barrichello – the most experienced F1 driver of all-time – Nico Hulkenberg could hardly have wished for a better first teammate to measure himself against. Barrichello was reaching the end of an F1 career which had started way back in 1993 while Hulkenberg carried on until 2019.

Though his time in F1 now seems to have come to an end, the fact Hulk raced with Max Verstappen and Charles Leclerc while his first teammate competed against the likes of Ayrton Senna and Alain Prost just highlights how many different eras of the sport Williams’ 2010 line-up would end up spanning.

If it’s sheer years you’re after, this one is right up there. Patrese made his debut with Arrows in 1977 and in 1993, his final season, was teammates at Benetton with a young Michael Schumacher. Schumi of course raced until 2012 – 35 years after his former teammate had first started a grand prix.

Unlike the majority of other drivers in the Red Bull junior programme, Daniel Ricciardo made his debut not with Toro Rosso, but with HRT in 2011, when he replaced Narain Karthikeyan. However, for the Indian GP that year, Karthikeyan was brought back to a race seat in place of Vitantonio Liuzzi, giving us the thoroughly weird pairing of Karthikeyan and Ricciardo.

Before his unremarkable couple of seasons with HRT, Karthikeyan made his name during his debut season with Jordan in 2005 when he became India’s first F1 driver. He was also once a Red Bull junior himself, so the way he found himself teammates with a then-current Red Bull junior driver who’d actually replaced him in a backmarker team and has gone onto become one of the best drivers on the current grid is an incredibly odd set of circumstances. And it’s one that will only become more unusual the longer Ricciardo’s career lasts.

But the strangest thing? In their one race together, Karthikeyan actually finished ahead of the Aussie.

Nico Rosberg, the last person to beat Lewis Hamilton in the World Championship, spent his second season in F1 against a guy who got his break as a substitute for Gerhard Berger.

That’s how Wurz’s career began with three races for Benetton in 1997, a team where he stayed until the end of 2000. That period made up the bulk of his F1 career and, one-off appearance for McLaren aside, his 2007 season for Williams was the first racing he’d done in seven years.

A decade on from that and Nico Rosberg is the only driver not called Lewis Hamilton to have won the championship in the last six years – and it could easily be a few more years before someone takes that crown away from him. If that honour belonged to any of Wurz’s other teammates we’d be talking about Jean Alesi or Giancarlo Fisichella (OK, or Kimi Raikkonen), which puts into perspective the strange fact that he was teammates with Rosberg.

If George Russell goes on to have a long and successful career, we could one day look back on his partnership with Robert Kubica as similarly strange.

When Jacques Villeneuve walked away from BAR at the end of 2003, his fragile F1 career looked all-but done. It was therefore highly unusual that when Renault sacked Jarno Trulli towards the end of 2004, Villeneuve was the one chosen to come in and try to help the team get second in the championship, despite the fact he hadn’t driven an F1 car for almost a year.

Unsurprisingly, the 1997 champion was well off Alonso’s pace and by mid-2006, had dropped out of F1 for good. Alonso still raced in F1 for a further 12 seasons until the end of 2018 and hasn’t ruled out a return. The combination of his long career and Villeneuve’s very unusual one is put into perspective when you realise that they made their debut’s only five years apart.

Kimi Raikkonen’s career will span its third decade when he takes the start of the 2020 Australian GP and in Austria, he’ll surpass Barrichello as F1’s most experienced driver ever. For three years, he was teammates at McLaren with someone who made their debut in 1994 in the difficult circumstances following Ayrton Senna’s death – David Coulthard.

It seems weird now because it was a bit of an odd period for both McLaren and Coulthard as they slipped from their glory days. Coulthard was especially anonymous in 2003 and 2004 as Kimi established himself as one of the fastest talents in the sport and the duo only shared the podium together three times, which is perhaps why it’s a bit of a forgotten teammate pairing.

Andretti and Mansell both had fairly similar F1 careers in the sense that it took both of them quite a while to get established, had the bulk of their success in the final quarter of their time in the sport, and were still fast even as they entered their 40s.

Their paths crossed as teammates during the 1980 season. Andretti was paired with Elio de Angelis at Lotus but, for three races that year, the team added a third car for Mansell, who was making his debut. It took 12 years for Mansell to finally win a title in 1992, 14 years after Andretti won his title in 1978. But the time of their first and last races is what really stands out; Mansell’s last came in the 1995 San Marino GP for McLaren. Mario Andretti’s first race start came for Ferrari at Watkins Glen – in 1968.

That’s 37 years spanned in the careers of these two teammates – more than half the age of the Formula 1 World Championship itself. F1 cars didn’t have slick tyres, barely had wings and still raced on tracks that were little more than closed public roads when Andretti started; by the time Mansell was done they were aero monsters racing on purpose-built courses, and technologies like ground effect, turbo engines, active suspension and electronic aids had all been developed, raced, and eventually banned.

Are there any other teammate pairings that surprise you now looking back? Let us know in the comments! 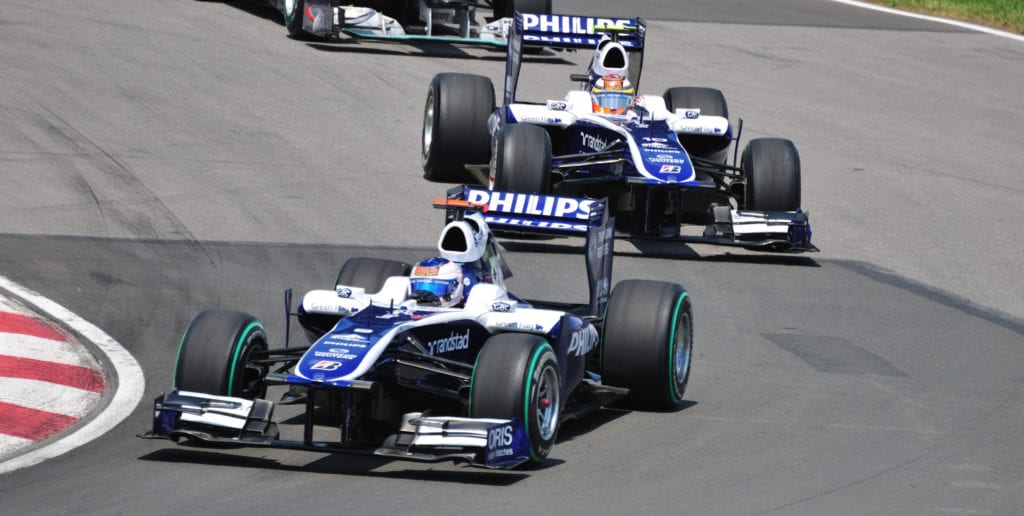