The Macau GP weekend stands out on the motorsport calendar for both its rich history and its uniquely competitive nature as an aggregator of global F3 talent. It’s an event that draws in some of the best drivers from various F3 championships dotted around the world, and its unforgiving slalom of walled corners ensures competitors will be pushed to the maximum in terms of focus and racecraft. The participants of the race join names like Ayrton Senna, Michael Schumacher, Lewis Hamilton, Sebastian Vettel, Mika Hakkinen and Jenson Button as previous big names to participate in what’s now known as the F3 World Cup.

GP3 driver, Ferrari Driver Academy member and winner of last year’s Macau qualification race, Callum Ilott, is returning to the streets with Carlin this year for his fourth Macau GP. It takes place from the 15-18 November (with most of the races happening at the weekend) and he’s given WTF1 some insights about what makes it such a special event.

CI: “Casinos are big business in Macau, it’s been described as Vegas on steroids! Being 19, I’m not allowed in them, but it doesn’t mean I haven’t had a little look…”

It’s fitting that the Monaco of the East is surrounded by casinos. Gambling characterises the track, too, and the first Macau GP in 1954 was actually based around the concept of a treasure hunt.

CI: “As well as the F3 race and GTs, there’s also a bike event that features some of the big road race names from the TT, like Michael Rutter and John McGuinness. There are also touring car races for some of the local drivers in wild Mitsubishi Evos and Subarus, they are proper Fast & Furious spec!”

While the F3 race is the headline of the weekend, Macau also plays host to GT3 cars in the FIA GT World Cup, The World TCR season finale, Macau Touring Car Cup, Lotus Cup and – most ridiculously of all – the Macau Motorcycle Grand Prix.

CI: “Crashes – Usually loads of them. Type in ‘Macau crash’ into YouTube and you’ll see what I mean. There is no runoff. It’s just track then bang, Armco, that’s it. It’s generally therefore a good idea to build up your speed gradually at Macau. Otherwise you can get pretty unpopular with your mechanics if they have to spend every night fixing your smashed car instead of enjoying what else Macau has to offer!”

The nature of the Guia circuit fosters all sorts of unusual and spectacular incidents, from circuit-blocking pile-ups to last corner chaos. It’s an Armco biome that promises some sleepless nights for team mechanics.

CI: “ As it’s a temporary street circuit, there’s no testing and the track changes a lot over the weekend. Traffic and stoppages play a big part in quali so despite all the preparation, it can be cruel to miss out on a decent slot when it’s not your fault. You need everything to come together to get the win in Macau.”

It’s not enough to be lucky, you’ve got to be good – but an ill-timed red flag or unwanted safety car can turn the whole race on its head. Because the track is so challenging, both of those things are more likely than at most other events.

CI: “It’s the only race this year that I’ll need a ferry to get to, though there is also the new bridge/tunnel that’s just opened. Now a race across that bridge would be cool…”

Look out for the 2019 Ferry Macau GP and also an open bridge jump to be added to the 2019 track layout. Hey, the race is crazy enough anyway, why not throw a jump in!?

CI: “My favourite part of the track is the hill section that runs from Lisboa (Turn 3) to Fisherman’s (Turn 23!) With 20 turns you are busy all the way. The rest of it is just fast – probably the fastest speed you can get in an F3 car as you have proper low downforce spec and the chance of a decent tow in Macau. I think Max Verstappen hit 273kmh when he raced here and we aren’t too far behind with today’s cars in the high 260s.”

With high speeds and low downforce on a narrow, twisty layout, it’s safe to say that this is a proper drivers’ circuit.

CI: “There is prize money, a good trophy and credibility; it still means a lot in the racing world to win in Macau. It’s the race that has got it all.”

With most of the 2018 F3 drivers making the trip to Macau this year, Ilott will face strong competition from the likes of last year’s winner Dan Ticktum and F3 champion Mick Schumacher. However, the track is so unique that the winner can come from pretty much anywhere – it’s all about who can settle down and find a rhythm the quickest.

The qualifying race takes place on 17 November, with the feature race taking place on 18 November. If the circuit wasn’t challenging enough, the weather is also expected to be overcast for both races. As Ilott suggests, the prize is a trinity of money, silverware and credibility, each of which is a factor that these strong F3 drivers from across the world need to make that next step up. It’s a truly unique race weekend, and one not to be missed.

Want to see how Callum Ilott and the rest of the F3 field get on? Good news – you can watch all the action live on WTF1 by clicking here. 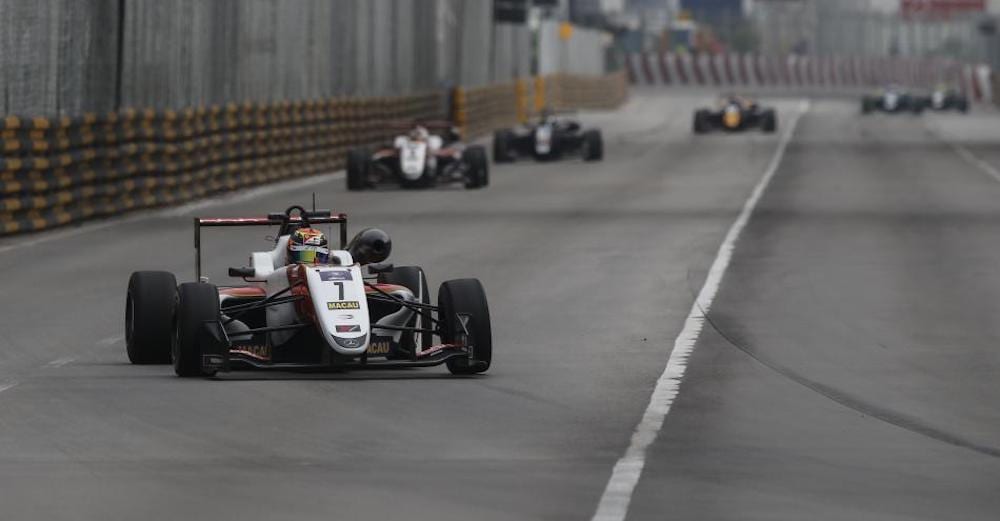