7 Of The Craziest F1 Season Openers

All of that would be exciting enough, but sometimes we get to watch a race that’s so insane and so unpredictable that we don’t learn the things we’d hoped to learn…and we don’t care, because we end up with an instant classic. Here are seven of the most action-packed season-opening Grands Prix.

The 2002 season started with a bang (literally) when Rubens Barrichello and Ralf Schumacher collided on the run down to turn one, triggering an enormous collision that eliminated eight cars on the spot.

As the race went on the incidents continued. Trulli crashed out of second place, Coulthard lost the lead as the safety car came in (thanks to a gearbox problem) and Montoya and Schumacher duelled for the lead.

Schumacher came out on top and went on to win from Montoya and Raikkonen, but all eyes were on the battle for fifth. Mark Webber, driving for Minardi in his first race, was coming under pressure from Mika Salo’s Toyota.

In the closing laps Salo attempted to overtake but spun, leaving Webber to score Minardi’s first points in more than two years, and at his home race to boot. It was such a popular result that after the race he was allowed to go up to the podium and celebrate.

A pity the rest of 2002 wasn’t as unpredictable…

The remarkable rise of Brawn GP from the ashes of Honda was the big story at the start of 2009 (along with double diffusers) but whilst Jenson Button completed a flawless lights-to-flag victory in Melbourne to kick off one of the most amazing stories in motor racing, behind him things weren’t as straightforward.

Heikki Kovalainen was the victim of a messy first corner and from there things settled down somewhat. But as the race neared its end things kicked off again. Kubica made a move on Vettel for second place but the two collided, putting them both out of the race. This caused the race to finish behind the safety car, Button winning from team-mate Barrichello with Trulli in third. Further back Sebastien Buemi scored points for Toro Rosso on his debut by finishing seventh.

But the drama wasn’t over yet; the ‘liegate’ scandal was about to kick off. After the race Trulli was penalised for overtaking Hamilton behind the safety car, putting the McLaren driver on the podium. Things weren’t quite as they seemed though, and at the next race in Malaysia it was announced that after further investigation Hamilton and McLaren had been found to have deliberately misled the stewards in order to get Trulli penalised. They were disqualified and Trulli was reinstated into third place.

The effectiveness of Pirelli tyres (no, really) in qualifying for the opening race of 1990 at the unloved Phoenix street track made for one seriously messed up grid. Gerhard Berger was on pole for McLaren but alongside him on the front row was the Minardi of Pierluigi Martini. Andrea de Cesaris’ Dallara was third, Alesi’s Tyrrell fourth and Senna only fifth.

At the start Alesi (in only his ninth start) shot off into the lead and stayed there for half the race. Senna caught up and inevitably passed him, but Alesi was having none of it and immediately retook the lead.

A lap later and Senna made the move stick (just), but Alesi had shown what he was capable of and carried on to finish an amazing second, just 8.6 seconds behind Senna at the flag.

The driver who wins the first race of the year often goes on to win the championship, but that wasn’t the case in 2003. It was one of those races where it seemed like anyone could have won it, but in the end it was David Coulthard who took the honours for what would be his last victory.

The race was damp at the start and Micheal Schumacher led, while Barrichello jumped the start but crashed out before he could take his penalty. Montoya led for a while, then Raikkonen was at the front but lost out after getting penalised for speeding in the pit lane.

Montoya led again and was looking set to win, but he spun ten laps from the end, leaving Coulthard to take the win ahead of Montoya and Raikkonen. Schumacher was only fourth, marking the end of Ferrari’s streak of 53 consecutive podiums.

The Buenos Aires circuit in Argentina often produced exciting racing, and in 1980 a crumbling track surface only added to the drama.

Emerson Fittipaldi attempted to lead a boycott of the race because of the conditions (which were caused by the hot weather and extreme downforce of the ground effect cars), but it went ahead anyway and just as well, because the race turned out to be a classic.

Alan Jones, Jacques Laffite, Gilles Villeneuve and Nelson Piquet engaged in a fierce battle; the broken track surface made conditions difficult and they all went off the track at some point.

After Jones made a pit stop he charged back through the field to take victory from Piquet. Laffite retired with engine failure and Villeneuve’s suspension broke, which allowed Keke Rosberg to score his first podium for the Fittipaldi team. Further back Alain Prost finished 6th for McLaren to score a point in his first race.

The opening race of 1955 was hot – really hot. One of the hottest on record in fact. Racing for three hours in the searing conditions was a brutal test for the drivers and come the end only two had managed to complete the entire distance without sharing their drive (as was allowed at the time) – fifth-place finisher Roberto Mieres and winner, Juan Manual Fangio.

The driver sharing made for an unusual result – Nino Farina and Maurice Trintignant both finished second AND third (Trintignant was also recorded as retirement!) as the Ferrari team happily swapped their drivers around to ensure their cars got to the end.

What is it with Albert Park and crazy races? The 1998 race wasn’t crazy because of a massive pile-up, or rain, or even good racing. It was just…weird.

The new rules for ‘98 meant narrower cars and grooved tyres and the cars were proving difficult to drive – one fan even tried to place a bet that no-one would finish the race. That wouldn’t be the case however as McLaren romped to a 1-2 by over a lap from third-placed Frentzen, the Adrian Newey-designed MP4/13 proving pretty much untouchable.

Hakkinen was leading comfortably when he came into the pit lane and out again, without stopping. Apparently he misheard a radio call – Ron Dennis later claimed their radio was hacked – but either way it had cost him the lead to Coulthard. The order stayed the same until a few laps from the end, when Coulthard suddenly slowed on the pit straight to let Hakkinen back ahead.

The two drivers had agreed before the race that whoever led into the first corner would win the race and Coulthard was simply keeping his word, but the whole thing just seemed bizarre.

Which F1 season-opener has been your favourite? Let us know in the comments. 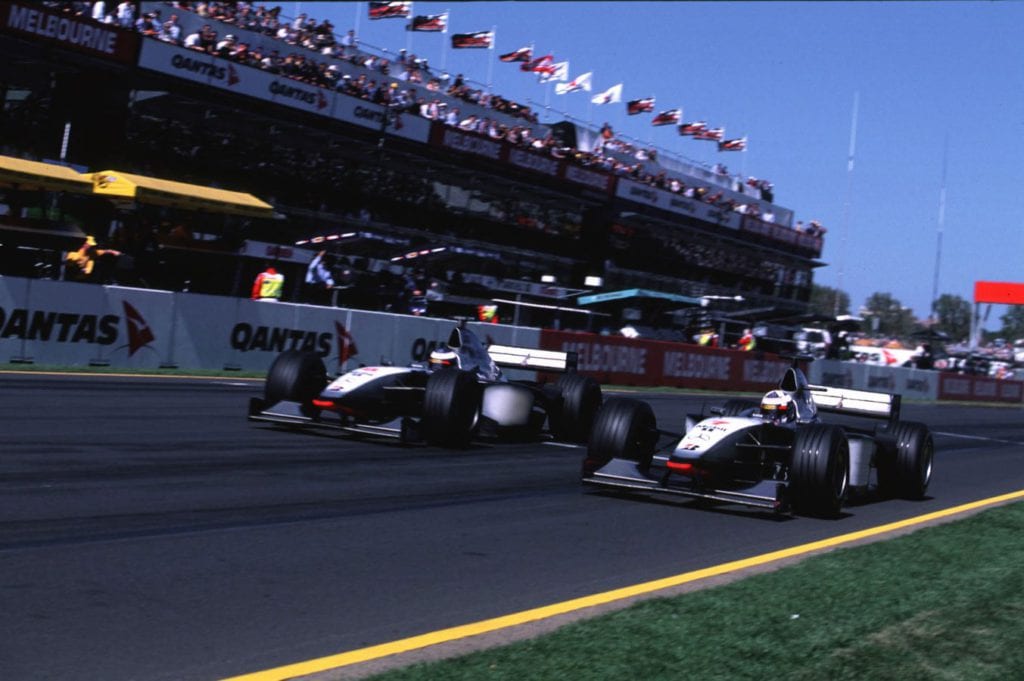