7 Of The Most Memorable French Grands Prix

The French Grand Prix has returned to the calendar this year after a 10-year hiatus. It’s baffling that it’s been that long given that the French practically invented grand prix racing, but still, it’s back now, so hooray!

With such a long history there have been plenty of great races there, too – here are seven of the best.

The 1953 race at Reims was so good that it ended up being hailed as the ‘Race of the Century’. Jose Froilan Gonzalez had fuelled his Maserati light and led the first half of the race, but couldn’t build up enough of a lead to pit, refuel, and get back out in front.

That put Juan Manuel Fangio in the lead and for the rest of the race, he and Mike Hawthorn swapped positions in a titanic scrap for the lead. Fangio’s Maserati had the power but Hawthorn’s Ferrari had the braking performance. Officially the lead between them changed 12 times, but that doesn’t count the numerous positions changes that occurred away from the start/finish line.

At the end of the 60 laps, it was Hawthorn who took his first win, just one second ahead of Fangio, who in turn was just a few tenths ahead of Gonzalez. Alberto Ascari finished four seconds down in fourth, his nine-race winning streak at an end.

Clermont-Ferrand was a stunning circuit and in 1972 the scene of one of the all-time great drives. Now driving for Matra, the luckless Chris Amon was still yet to win a grand prix, but he was on searing form in France. He took pole by eight-tenths from Denny Hulme’s McLaren and in the race shot off into the lead. At half-distance he was way in front, but then came Amon’s mandatory bad luck.

The Clermont-Ferrand circuit was notorious the stones that littered the edge of the circuit, one of which had already ended Helmut Marko’s racing career when it got flicked up by another car and pierced his visor, blinding him in one eye. Amon’s fate wasn’t quite as bad as that, but one of the stones had punctured his tyre. He lost the lead crawling back to the pits, and then a further 50 seconds having the tyre changed.

He rejoined down in eighth place and went on a rampage. By the end of the race he’d made his way back up to third – which doesn’t sound particularly impressive, but there were times when he was lapping whole seconds per lap faster than eventual winner Jackie Stewart. On the last lap alone he took over four seconds out of second-place Emerson Fittipaldi!

Victory may have eluded him yet again, but it was undoubtedly Amon’s greatest drive and one which reinforced the fact that he was every bit as good as the champions of the era.

The greatest F1 battle of all time? The Renault’s with their turbo engines were looking unbeatable at Dijon and Jean-Pierre Jabouille cruised off to his maiden win, and the first for a turbocharged car in F1. Behind him Gilles Villeneuve has done a grand job to stay second for most of the race, but his tyres were ruined and Rene Arnoux caught and passed him in the other Renault.

Gilles, of course, wasn’t having any of it, and lunged back ahead from absolutely miles behind. The resulting scrap has rightly gone down as perhaps the most memorable in F1 history. But despite the aggression and the wheel-banging, there was no whining about it afterwards – well, apart from some other drivers, who felt they’d taken too many risks.

The drivers actually involved didn’t care, though – Arnoux even went back to the paddock straight after the race to watch the footage back!

The March/Leyton House team was taken to new heights in the late 1980s as a young Adrian Newey worked his aero magic on the small team. Things went wrong in 1990 though as wind tunnel issues meant the CG901 simply wasn’t producing the expected performance. In Mexico, both cars failed to qualify and although Newey had made some changes, he left the team for Williams.

At the next race in France, the combination of the smooth surface of Paul Ricard and Newey’s changes had transformed the CG901 – Ivan Capelli qualified seventh, Mauricio Gugelmin 10th. In the race, things were even better as the cars were not only fast but gentle on their tyres, which meant that neither driver planned a pit stop. By half distance, the Leyton House cars were running first and second – just two weeks after failing to qualify in Mexico!

Alain Prost caught and passed Gugelmin (whose engine expired shortly after) but Capelli was still leading. He was staying there relatively comfortably too, but three laps from the end, hopes of an enormous upset were dashed. Capelli’s Judd engine was starting to stutter, and Prost dashed through to snatch the win. Capelli finished second and, with Newey gone, the team never came close to a podium (let alone a win) again.

The 1999 weekend at Magny-Cours was a bit of a weird one. Rain in qualifying led to the seriously mixed-up grid of Rubens Barrichello’s Stewart on pole alongside Jean Alesi’s Sauber, with Olivier Panis in the Prost third.

Rain played a part in the race, too. After David Coulthard retired from the lead on lap nine Barrichello reassumed the lead and was looking comfortable, even when the rain came down on lap 21. In fact, the rain was so heavy that three drivers – Jacques Villeneuve, Alex Wurz and Marc Gene – all spun out of the race behind the safety car.

Barrichello was finally overhauled by Michael Schumacher, who was then delayed with an electrical issue. Barrichello took the lead back, only to be passed by a charging Mika Hakkinen (who’d started 14th). However, the mid-race rain had thrown everyone’s strategy out of whack and both Hakkinen and Barrichello had to pit six laps from the end for a bit of extra fuel.

That handed the lead – and the win – to Heinz-Harald Frentzen. Jordan had gambled on making a one-stop strategy work when the rain came down and Frentzen had managed to save enough fuel throughout the race to make it to the end. It was his first win since leaving Williams, and the start of what turned out to be a surprising championship challenge.

Michael Schumacher and David Coulthard put on a brilliant display at the head of the field in 2000. Schumacher had led from ole whilst teammate Barrichello held up the McLaren pair. Coulthard eventually squeezed his was past and began eating into Michael’s lead. His first attempt at a pass was unsuccessful as Schumacher was typically uncompromising in defence, lead to some legendary hand gestures from the Scot.

A few laps later he tried again. There was a bit of wheel-banging as he gave Schumacher some payback for his earlier moves, but it was clean enough and Coulthard held on to take his third win of the season. Schumacher, meanwhile, retired with a blown engine as he was fending off Mika Hakkinen for second late in the race.

A four-stop strategy wasn’t unusual in the high-degradation Pirelli era, but during the refuelling era, it was pretty much unheard of to do one – at least intentionally. Yet in 2004 Ferrari and Schumacher were so dominant that they made the most of the super-short pit lane at Magny-Cours to pull off a four-stopper in order to beat Fernando Alonso and Renault on home turf.

The whole weekend had looked like it was going to belong to Alonso and he led the early stages comfortably for pole. But Ferrari felt Schumacher was quick enough to win if only he had some clear air to run in – hence the unorthodox strategy. It worked, giving Schuey his ninth win in 10 races. Alonso finished second, and with Trulli running third, at least having both Renault’s on the podium would be some consolation for the home crowd, right?

Well, it might have been, but Trulli was asleep on the final lap and Barrichello mobbed him at the penultimate corner. The team was furious, Trulli didn’t score at all in the next five races, and he was fired before the season was done. 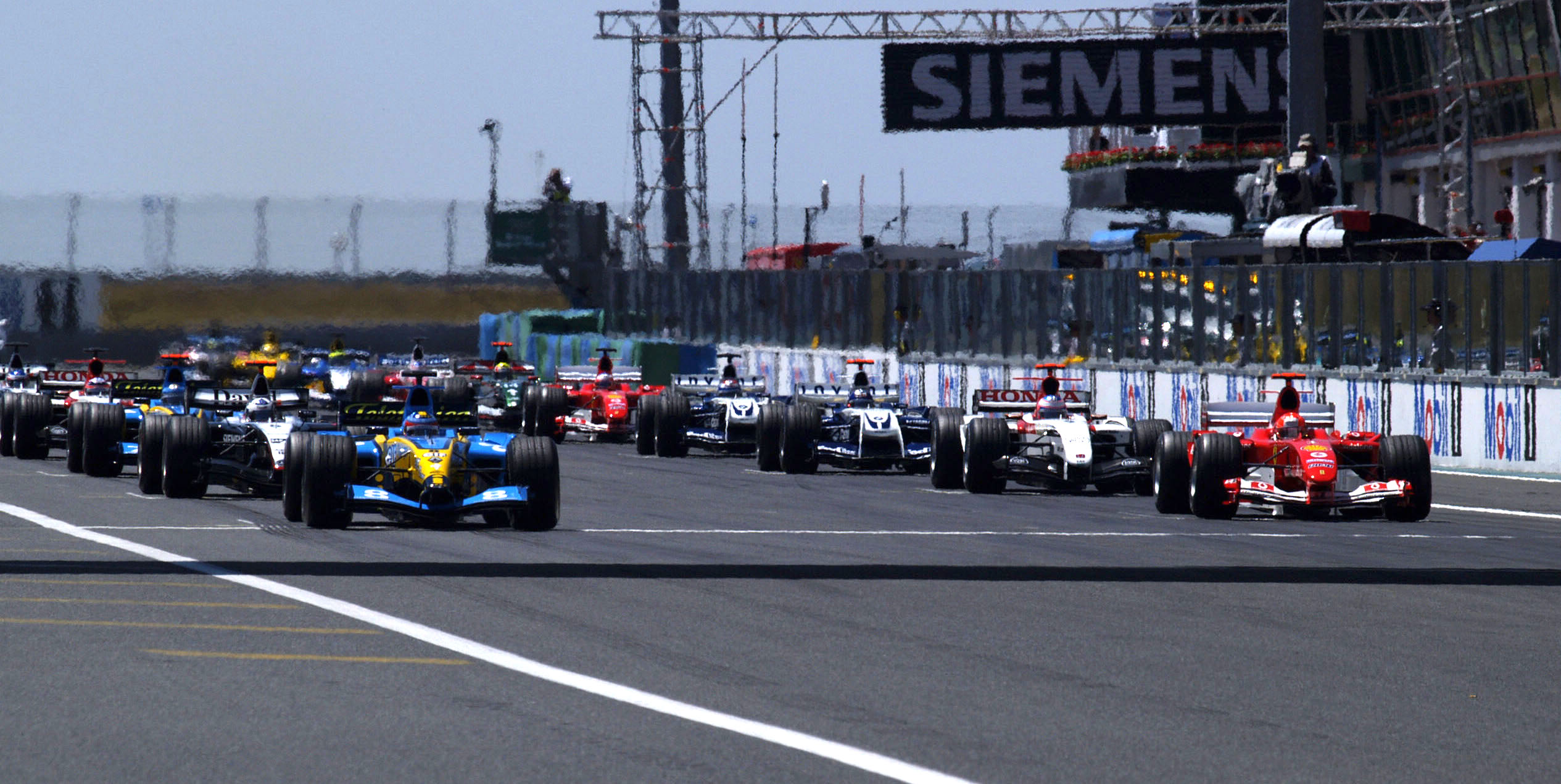