We love a good movie and if it also involves fast cars or motorsport, you’ve got our attention… most of the time. With the news that Netflix will be producing a film where an F1 driver becomes a getaway driver, we looked back at some of the cringe and unrealistic racing movies over the last few years.

Buckle in; this could be controversial. Also goes without saying, this is probably going to contain quite a few movie spoilers.

Herbie, also known as ‘The Love Bug’, was a 1963 Volkswagen Beetle with human traits and emotions and featured in several movies during the ’60s until the late ’80s. The car became iconic and was brought into the 21st century with the 2005 film Herbie: Fully Loaded.

Featuring Lindsay Lohan, who was the ultimate ‘it girl’ at the time, the plot is essentially a rag to riches story. She buys Herbie in a scrap yard, renovates the car back to its better days and then wins a NASCAR race against the current champion.

It was never going to be a critically acclaimed film and is intended as easy watching for a younger Disney audience, but it’s still fairly terrible. “The movie is pretty cornball,” film critic Roger Ebert called it at the time. Lohan did win a Kid’s Choice Award for her role, so it’s not all bad.

The movie is available free for Disney+ subscribers and available to buy on platforms like YouTube or Amazon Prime.

This movie was unanimously voted the worst racing movie of all time among the WTF1 gang. The film starring Sylvester Stallone was initially intended to be about F1 but was instead based on the Champ Car Series.

The racing scenes are about as realistic as Nicholas Latifi winning the drivers’ title this year, and the whole film is packed with exaggerated crashes and terrible CGI effects. Little spins resulted in massive pile-ups on-track and cars being pinged 100ft in the air for no apparent reason.

With seven nominations at the ‘Golden Raspberry Awards’, the film was a total disaster. On Rotten Tomatoes it has a lousy 14% score and only made $32 million at the box office compared to its budget of over $70 million.

This is one of those films that is so bad you really do have to see it to believe it.

Honestly, we don’t know. It appears to have been taken off all streaming services, but perhaps you could hunt down a rare copy in a bargain bucket.

With a cast that includes Dennis Quaid and Zac Efron, this movie plot follows Dean (played by Efron) and his ambitions to become a professional racecar driver. Unfortunately for him, the reality is that he’s expected to take over the family business in farming.

As Dean’s career progresses, he is offered a NASCAR opportunity but chokes at the pivotal moment and ruins his chance at becoming a professional racing driver. He slows when pressured by aggressive drivers during a test race, and knowing his future will be farming heads on a downwards spiral.

Things go from bad to worse for Efron’s character when purposefully drives his car into a tree before murdering a previous motorsport rival. Yep, we bet you didn’t see that one coming either.

It’s not the worst movie in the world and includes many complex layers, lots of which have no connection to motorsport. Give it a chance, and let us know what you think.

This Netflix Original came out last year and received a mixed reception. With the tagline ‘anything boys can drive, she can drive faster,’ the movie follows a young woman who wants to follow in her father’s footsteps and become a racing driver.

After finding help from her uncle and his car workshop, she becomes a breakout star of the very competitive US dirt track racing scene despite literally no experience. The whole thing is kept secret from her mother, and it’s later revealed her father died in an accident on the same track she’s competing on.

Overall, it’s a reasonably heartwarming story but one of those films which explains the entire plot from the trailer.

The movie is free for Netflix subscribers.

For most, Talladega Nights is the best racing movie of all time. It’s funny, comical and yet another masterpiece from Will Ferrell, but for others, it’s the biggest load of tosh going.

Daniel Ricciardo is no stranger to telling us how much he loves this movie, even nicknaming himself Ricky Bobby on several occasions after the star of this movie. In an interview with GQ Sports, Ricciardo pulls apart some of the goofs in the movie including the iconic scene of Bobby running into the middle of the track in his baggy underwear claiming to be on fire.

We could go into detail about why this scenario would never be allowed to take place or comment on the factual errors throughout the movie, but at the end of the day, it’s meant to be a fun take on the world of NASCAR. Plus, we don’t want to give off the vibe that we’re no fun at parties. We are. Promise.

The film has also given us some of the most iconic quotes, from “shake and bake”, “if you ain’t first, you’re last” and “AAAAAHHH! Help me Tom Cruise! Tom Cruise, use your witchcraft on me to get the fire off me,” which takes us nicely onto our next movie.

Another bonafide classic. Tom Cruise stars alongside future ex-wife Nicole Kidman in this racing movie which follows a young and aggressive hotshot who tries to make it big in NASCAR. Can you see a theme developing among these movies?

Cruise plays Cole Trickle who has years of experience in open-wheel racing. He has an end goal of Indy but soon realises that you have a more even playing field in stock cars as “all cars are the same”. A Chevrolet dealership tycoon scouts him to race for him in the NASCAR Winston Cup Series.

It is often referred to as ‘Top Gun’ with four wheels but does feature legitimate and authentic race cars. At the time it did well in cinemas and home video but was handed somewhat underwhelming reviews.

Monthly Film Bulletin said the film was “simply a flashy, noisy star vehicle for Tom Cruise, one which – like the stock car he drives – goes around in circles getting nowhere”. Ouch.

I think we have saved the best till last.

Written, co-produced and directed by the brains behind ‘The Matrix’, this film is based off a 1960s anime series. Although released in 2008, the movie had been in development since 1992 with a constant change of actors and filmmakers. You will soon see why.

Once the film was finally released, it proved to be a massive commercial failure and grossed $93 million worldwide on a $120 million budget. Yikes. It was nominated at the Golden Raspberry Awards too.

The movie follows ‘Speed Racer’ who wants to continue in his deceased brother’s footsteps and become a professional racing driver. He races for his family-run team but is offered an incredible deal with a rival organisation. Speed Racer declines, and the boss of the rival team instructs his drivers to take out Speed in a crash that destroys his car. Are you still following?

Another team offers to help Speed and as a reward will hand over evidence that will have the rival team shut down. Speed agrees, and competes alongside a mysterious teammate known as ‘Racer X’. Long story short, Racer X is revealed to be his brother who wasn’t dead after all. The whole movie is totally bizarre, outlandish and requires a long lie down afterwards.

Any we missed off the list or disagree with our choices? Let us know in the comments below! 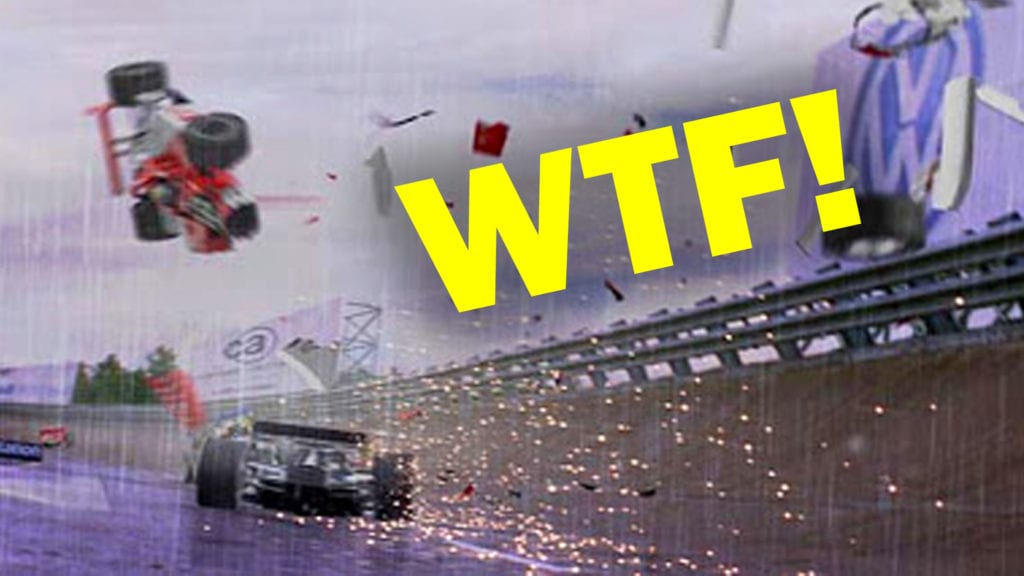